I hope it goes on forever, its awesome that bands try to stick their minds out there and try mixing some of their favorite music into one. If there was only straight hardcore bands or metal or whatever, I would probally shot myself. It would get soo boring. Its good for the scene to have new fresh music.

The stories are simple, but honest. The songs are based on where we live and grew up. They tell our real life story of life and love. We write what we know and what we have seen. Hopefully that comes across on the record.

Just like str8edge and vegansim we all in the band have different ideas about religon and we are not here to change people. 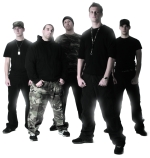 LORNA SHORE - ?And I Return To Nothingness

TRIGGERMAN ? A Place In The Sun