Hey! Your new record will be released soon. Is everything already in the can?

The recording itself is ready!!!! There are so many pieces to the puzzle. The vinyl pressing plants are just backed up and this is what we are mostly waiting on. There have been a lot of people working really hard to make it all possible. We are independent and for the most part DIY, so everything from the recording, mastering, art, vinyl, and putting it out falls on our plate, but cant wait!

How many songs did you record and what can you reveal about the tracks so far?

There are ELEVEN new songs on the album! We are calling it “Unholy Hymns” as we feel that describes our music (as no one ever knows what kind of music to call us). We have split the album up into two different sounding halves. The first half, “Book l”, we stick to our gritty folk style people know us for. The second half of the album, “Book ll”, we are doing a concept album within an album with our own twist of folk metal. It is darker, which is honestly the direction we are really passionate about and plan to deep dive into in the future. We have not done anything like this before.

Your lyrics are very personal. Is it strange when people ask you about this or is it actually always a good feeling when people deal with your lyrics?

It always feels good to know that you are not alone. I’m happy to know people relate, so no it's not strange for me. Sharing is healing and if I am singing about it then I am ready to talk.

You tend to have very dark elements in your visuals, which makes you unique in the folk genre. Where does the influence come from?

I have been a fan of the morbid and the macabre from a young age so writing about it comes pretty naturally. It is great when touring to be able to stop by different oddity shops...give me all the dead things! Writing something that DOESN’T have anything to do with death, decay, or the devil that is hard for me lol…

Around bands like BRIDGE CITY SINNERS and Days N Daze a sworn scene is forming. How would you describe this community? Is it homogeneous?

ACCEPTING, that’s how I would describe the scene. We are all broken and battered but we are holding on tight to one another. There’s a lot of love for a group of scary sweaty weirdos. Days N Daze has really helped foster the community. Love seeing them put everything into it (they’ve been touring almost non stop for 10+ years) mostly DIY. They treat everyone in the community as a close friend (not just a fan). Whitney, Geoff, Jesse, and Meagan we miss you!

You are still playing some shows this year like The Fest or Moonrunners. Are you looking forward to it or are you rather nervous if it will work out at all?

OOOooofffff you know I am holding on to hope right now. I miss being with my band.  It’s the first sliver of hope that we have had for live music in over a year now and it feels REALLLLLYYY good.That said, everyone's safety is so much more important than anything else. As much as I am aching for live music I want a healthy world first and foremost.

You seem to have a strong DIY attitude. Is it still an option to take a step like Days N Daze and sign with a bigger label?

We are a pretty tight knit little group. We do most everything in house. Scott our bass player runs Flail Records, Scott’s sister Lyz does all of our merch out of their basement, we hire smaller artists from the scene for artwork, one of my best friends for 13+ years, Jay, books us (Crawlspace Booking) and our long time friend Jesse at Lowshelf Recording records us in the armpit that is his room. We all do the Social Media together. We are doing the European vinyl pressing with SBÄM records for “Unholy Hymns” and our last record “Here’s to the Devil”. Flail records has been working with SBÄM on several projects and they rule. We are one big family. We have built some relationships with other labels and if it feels right we are open to it. At the moment we love working with all the homies.

You also do not leave out the topics of addiction and depression. What is your position on drug policy in the US and the world in general?

A mess. An absolute mess. There's just no empathy. Our system prefers to punish and imprison people as opposed to helping and healing them. It’s really quite sad and it’s not just the justice system, it’s the everyday human. We are all self absorbed, myself included. We need to walk a mile in the shoes of others and realize it is a possibility for all of us. Mental illness and addiction are the great equalizer, no matter your status, age, race, gender, they can affect anyone...

Outside of the USA,  I am most familiar with Canada's policies. Drugs have been decriminalized and there are things like easy access needle exchanges and safe injection sites, AS WELL AS free health care... So yeah, there’s a way to handle things and America isn’t doing it right if you ask me.

What thing would you change in the world if you could?

Honestly, I would just like everyone to find their own individual purpose, whatever makes them feel good about themselves.

You're finally coming to Europe in 2022. Which countries can look forward to seeing you?

WE WANT TO GO OVERWHERE. Over the last few years of being in the Sinners, we have gotten a chance to be modern day pen pals with some many of our supporters in Europe through social media. Excited to get to meet them. I love Punk and am excited about Rebellion fest in the UK. A few weeks ago there was a Finnish band who covered our song “Witches' Wrath” in Finnish. What is fucking cooler then that? Our friends at SBÄM records are  supporting the Unholy Hymns release in Europe and looking forward to seeing them all! 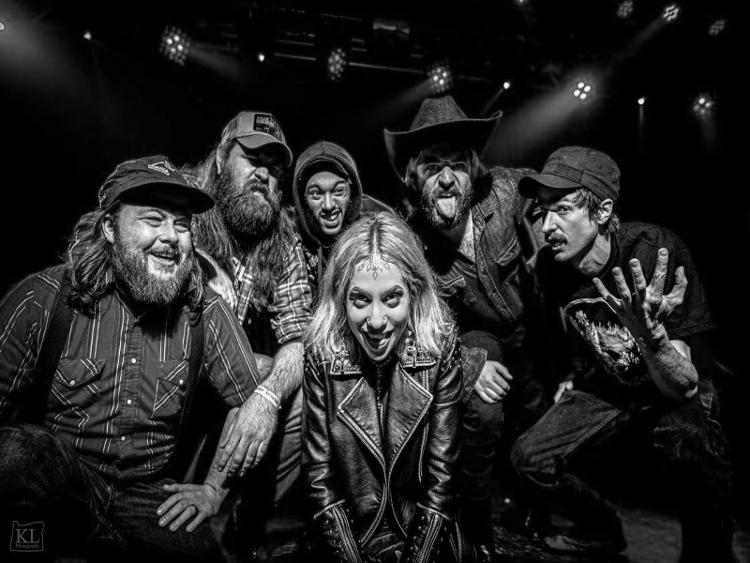