Interview mit A Day To Remember 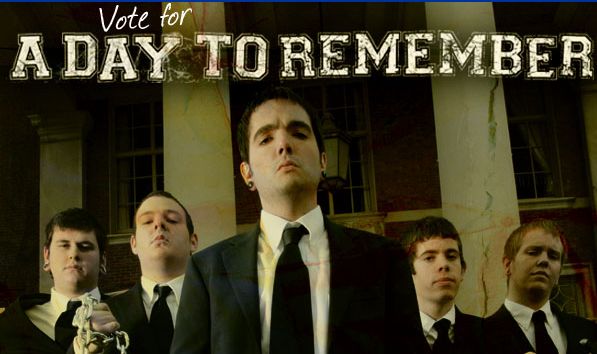 Please tell me, who is answering the questions?

Hey guys, I would like to talk a bit about your new record. We already had an interview in support of "And Their Name Was Treason" on Indianola Records. Why did you sign to Victory and why didn’t you stay with Indianola records.

There is no room to grow as a band on a smaller label like that, and Victory Records has the means to put your band out there. Indianola was like a stepping stone. They helped us put out our first record and get us on the road to being a full time touring band. They got us to the point where we were ready for bigger things, and Victory is the label we think can get us to where we need to be.

Victory records is a really big indie label, and for a lot of bands the label is one step away from a major deal. On the other hand several bands complain about the treatment they got from the label like HAWTHORNE HEIGHTS or WATERDOWN. Aren’t you afraid that something similar could happen to you?

Victory Records have been amazing to us. We’ve never been involved with a group of people that believed in us more then there whole staff does. The way we look at it, is yes they are pretty much the biggest you can get without being on a major. If we’re big enough that we’re selling that many records we’re getting paid anyways. We appreciate what’s been given to us. We couldn’t do this without someone to back us.

Ok, let’s talk about your new record. I did really like "And Their Name Was Treason" and I also do like "For Those Who Have Heart". Where do you see the differences between those two releases?

The way I describe the transition between the two CDs is it’s the same thing pretty much. We just took the two genres we mix and took them to the extreme. The pop parts are way poppier. the mosh parts are way heavier.

How did the production process defer from the last one?

We actually had a production process. Haha. The last one was recorded probably within 3 days. And we did it like two years ago. I think we all grew as musicians since then, and I think that shows.

I think "For Those Who Have Heart" sounds a lit more polished without losing its aggression. Do you agree?

100%. That was the goal, and that’s why we chose to go to Zing Studios. Everything that comes out of there sounds amazing.

With "For Those Who Have Heart" you bridge the gap between hardcore and poppunk without ever becoming too cheesy. I think you are still calling your musical style "pop mosh". Is it important to you to give your music a special name?

It is. In my eyes I think we’re doing something special. I hate it when people throw us into some lame category like emocore, or metalcore. We play straight up pop punk with some mosh style breakdowns thrown in, and correct me if I’m wrong, but I don’t think anyone else is doing that. At least I’ve never heard them.

With bands like AIDEN being your colleagues now, what do you think about the fashion and make-up shows in the hardcore scene?

To each his own.

That’s awesome that such an influential band as that is playing again. That’s always great to hear. A few of our members are straightedge, me being one of them. We’ve never been into the whole hardline thing. Like I said before, to each his own.

You have about 30,000 MySpace friends. How much time do you spend online?

When I’m at home maybe 2 hours a day. When I’m gone I don’t always get a chance to get online as much, and I’m lucky if I get on at all every other day.

You haven’t been to Germany yet. When are you coming?

We have never been, but as of today we are on the Agency Group in Europe so you will be seeing quite a bit of us in the very near future. We’re bringin the Souther rock overseas. Brace yourselves!!