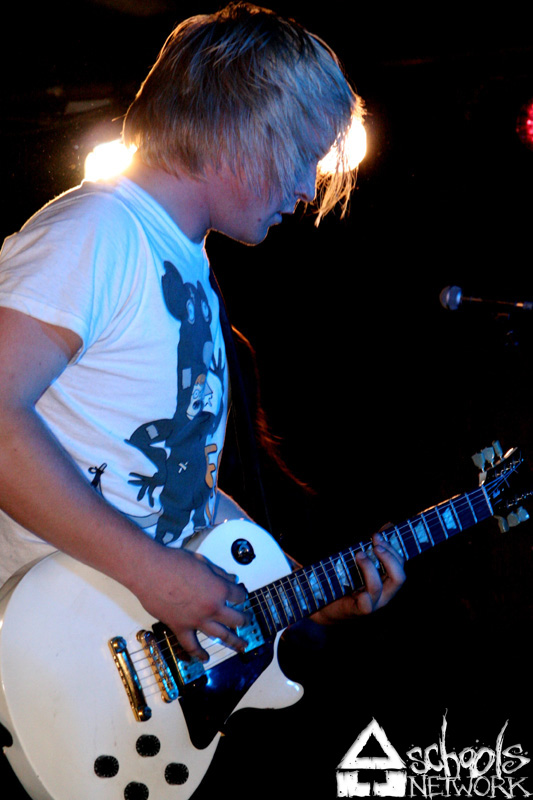 
The name of your band is "ADEPT". What does that mean?

Robert/ADEPT:
An ADEPT is an apprentice, who is at the beginning of something and trying to get himself up. We want to develop and some day be skilled.


One month ago Andrew joined ADEPT. Where did the decision for a third guitar player come from? What changed since then?

Robert/ADEPT:
It all started because Jacob – our first guitar player – broke his hand and we needed a cover. We liked the guy so much and he is so good at his guitarplaying, that we decided just to write music for three guitars and make our music bigger than it was before. At the moment we're playing the same songs that are written for two guitars and it doesn't sound so different now, except a little heavier. But we're writing new material for another album and you're gonna hear how it differs when it comes out. I think it's gonna be more guitar-based.

Did you ever have a Swedish Songext?

No, we didn't, because Sweden is such a small country and not so many people understand the language. We rather want to be understood by more people and English is international.

What are your goals?

Our goal when we started was to do some live-shows. After that our goals changed into play with a big band, to play in different countries, to play a European Tour and now we do it and our goals change again. I think our main goal at the moment is to make some money out of it, because we lose so much money and we're so dependent on our merch sales and stuff like that.

What are you doing in your everyday-lives? Are you working?

Robert/ADEPT:
I don't work, but the other guys do.
Jerry/ADEPT:
I work as a construction-worker, do average work and it sucks.

You grew up in a very small town in Sweden. How would you describe your youth? When did you start playing music?

Robert/ADEPT:
There are about 5.000 people living in this town and there's absolutely nothing to do in small towns. It's too far away from the bigger towns to do something. You start drinking – I think I was about twelve – and you play soccer or something like that.

When did you start playing music? 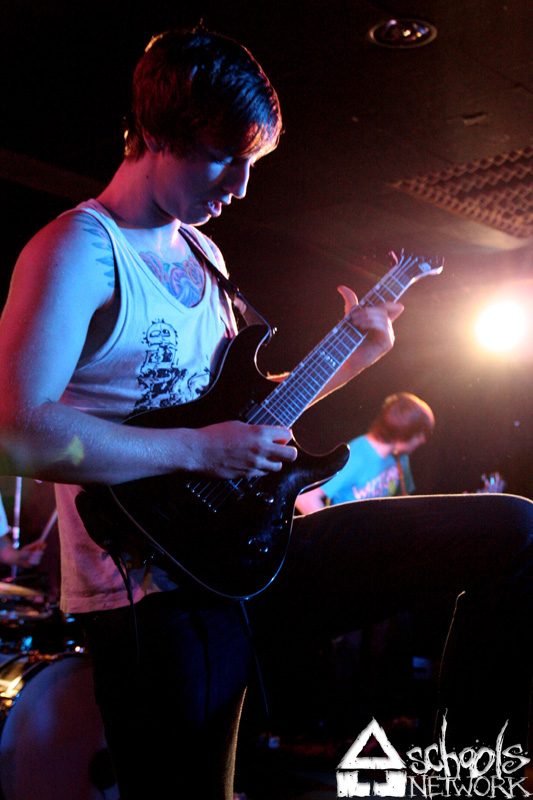 Gabriel/ADEPT:
Me and Jacob – the other guitars – play together since we were about ten years old.
Jerry/ADEPT:
We started ADEPT in 2004.
Robert/ADEPT:
But during the first two years we didn't do anything. We just said: "We're in a band. Check us out!" But we never had songs or played live. It just sounds good to say, you're in a band.

Did your music change during the years?

Robert/ADEPT:
In the beginning we sucked really really hard. Now we semi-suck (laughes).
Jerry/ADEPT:
We're getting better.
Robert/ADEPT:
We have the same influeces we had when we started. Guitar-based music like FUNERAL FOR A FRIEND.

How would you describe your own music without using the conventional terms? How do you create respectively write your music? 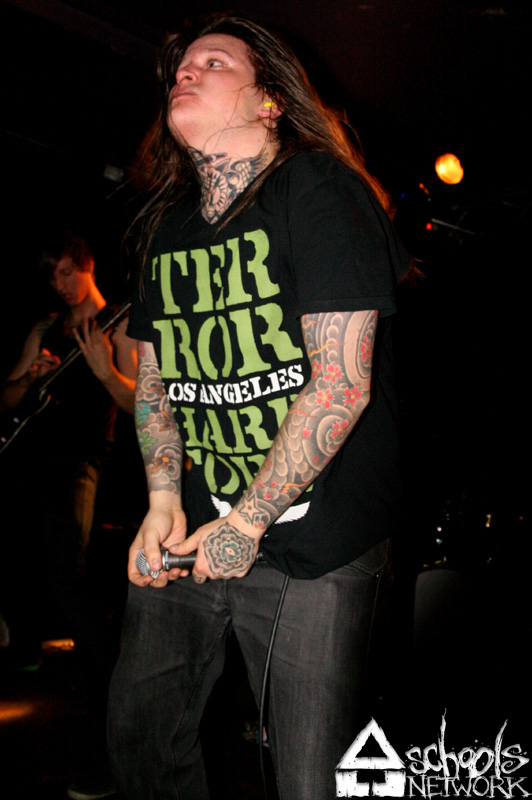 Robert/ADEPT:
It differs. Sometimes we start with a chorus which is really poppy and the song turns out to be really hard. We don't wanna narrow it on just sceamo, hardcore, metal. We wanna have poppy choruses, but still have breakdowns and sing alongs. I think it's cool to mix everything. Some people like it. Some people don't. We start on different angles on every song and we never know how it's gonna sound.

Your debut record – "Another Year of Disaster" will be in German stores in the end of January. What's the main topic?

Robert/ADEPT:
It's been released since February this year in Sweden, but it comes out much later in Germany. There are different types of songs on it, but the main theme is that people have lost hope in different ways and try to get it back. Each song ressembles a feeling we have experienced, when we met people who lost hope.

This European Tour with A SKYLIT DRIVE is your third bigger touring. How did it all start to get big?

Robert/ADEPT:
We were on a big tour with RAISED FIST in Sweden and then we were on tour with BRING ME THE HORIZON in the nordic countries.Now we're on this European Tour. It really went straight up. It all started when we won a competition to open up for METALLICA on SONIC SPHERE FESTIVAL in Sweden. This was a real turning point for us and from this point it all got started. We only played on very small clubs before.

Yesterday you played a show in Amsterdam. Today you play Cologne. How does that feel for you?

Robert/ADEPT:
I don't remember yesterday. (Laughs) It was our first time in Amsterdam and we got so drunk and so high and we tried everything (laughs). No, but it was really good! It's so weird, because when we started we rehearsed in Gabriel's Mum's garage and all of a sudden we come to different European cities and people sing along to our songs, buy our merch.This is really surreal, because we never thought we're gonna do this.

On your MySpace-Page I read your blog about searching for sleeping places on your European Tour. Did you find some?

Robert/ADEPT:
No we didn't! We slept in the van. I was very high and I got really paranoid (laughs). When you're an opening band I think you have to sleep in vans to start with.

Thank you very much for the interview.