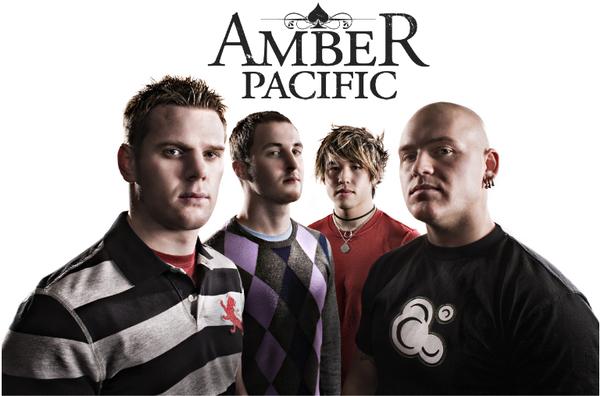 When AMBER PACIFIC started in 2002 in Seattle, pop punk or emotional pop punk was really big. Since than a lot happened, lots of genre bands broke up or changed their sound completely and all this emo and screamo music is in the charts. How do you see these developments?

A: I think that for the bands that have made the change from pop punk or emo punk to something completely different I’d say good for them? Personally I think what matters most is that you’re playing music that you love and as long as you love it my opinion or others opinions really have no merit.

With "Sincerity" you start of where you left with "The Possibility and the Promise" and even became more catchy and melodic. Where do you see the changes between the two records?

A: It’s only natural that if you practice something for a long period of time you are bound to get better at it and I think this is what has happened to us. We’ve all taken the time to really perfect our instruments and fine tune everything to the point of being really good at it and you can hear it in the new record.

With first week sales of around 10,000 copies in the USA you debuted 64th on the Billboard 200. Did you expect this to happen?

A: Each of us in the band had our own idea of what we would do first week, we all made little predictions throughout the week and I think the average concensus was around 10,000 so I’m glad we accomplished that goal.

You also have a Track on the TMNT soundtrack. What do you think about the Movie?

A: To be honest, the animation factor kind of killed it for me. I was a huge fan of the original turtle movies so it was a bit of a downer to see the latest installment, however, having our song in the movie itself was amazing and getting to fly down to Hollywood for the premier was an experience I’ll never forget.

How did you come up with a song titel like " Dear _____, This Has Always Been About Standing Up For What You Believe In."?

A: Greg, our bass player, came up with this title but it definitely conveys what I was trying to say in this song. We have seen so much in the two years of touring off the Possibility and The Promise and we wanted to make a statement to our fans that no matter what happens we are going to stay true to them.

Tell us something about the song "We Think We're Hardcore, Cause, Well, We Are".

A: This song was a simple way to get under the skin of those who aren’t so fond of Amber Pacific. Believe it or not a few of us are actually really into some heavier bands like Metallica and Dragonforce so to do something with huge reverb and harmonized guitars was an awesome experience. The title was just icing on the cake for those “special” AP fans J


"Follow Your Dreams and Forget The Scene" is a song written to a specific fan you met. What was so special about this encounter that you wrote this song?

A: We had the opportunity to meet up with a girl named Ashley through the Make A Wish Foundation last summer on the Warped Tour (2006). Her wish was to hang out with Amber Pacific for a day and we were fortunate enough to make that wish come true. We hooked her up with a ton of merch and brought her on stage during her favorite song “Gone So Young”. I wrote this song for her so she can always have something to turn to when in need. She was a huge inspiration to me and I can honestly say that that was probably one of the best things I’ve done in this band.

Which song is your favourite on the new record? Please explain why?

A: I think my favorite song would have to be “Take Me From This Place” reason being I had the chance to play my favorite instrument the piano and we brought in the Seattle Symphony to play the string part I had in mind. The end product leaves me with a chill and I think that’s why I like it so much, it turned out so much better than I had anticipated.

What can you tell us about the lyrics in general?

A: I credit a lot of our success to the fans. We have spent so much time getting to know our fans by meeting them at our tent during Warped Tour or seeing them at our merch table during club shows, either way we’ve probably met and signed something for about 90% of our total fanbase I swear! Through these times I’ve learned how much our music has impacted their lives and I wanted to make a record that would do just that but in a much more direct way. As a result I made it a habit to think of songs that people can relate their everyday situations to and decided to pass on writing songs about my ex-girlfriend this time around.

Ben Harper (ex-YELLOWCARD) joined AMBER PACIFIC in 2006 after leaving YELLOWCARD. How exactly did this happen?

A: We met Ben through the Warped Tour and asked him if he’d be interested in playing with us because we were in search of a 2nd guitar player at the time to replace our original member Justin. He came out and saw our set a few times and decided that he was ready to get back into the swing of things and came out with us for a headlining run last year.

Since when have you been in contact with him?

I’d say Warped Tour 06 was when we really started talking to him though we knew of him through Yellowcard when they were on Warped in 05 I believe.

Ben worked with you on the new record in the studio but left the band before finishing the record. Why did he leave? There must be a good reason leaving the band during the recording process.

A: Ben had absolutly nothing to do with this new record. During pre-production he was missing valuable practice time and pre-pro time with our producer so we had to make the call. Inevitably it just wasn’t the right fit and at the time it seemed Ben’s priorities were with his record label first and Amber Pacific second so we were left with no choice but to let him go.

A: Again, Ben had nothing to do with the writing process or recording and I think we actually functioned better as a 4 piece then as a five at the time. I loved the challenge of having to play all the guitar parts on this record. Our new replacement, Rick Hanson, has been a long time friend of ours and ended up playing the solo’s on Summer in B and Runaway as well as some other parts here and there.

Do you think the popularity of YELLOWCARD and the press you received due to him joining AMBER PACIFIC helped the band and its’ success?

A: I credit all the success that Amber Pacific has had to the four guys who have been there from the start, myself, Matt, Greg, and Dango. Having Ben in the band didn’t bring us any more press or success than what we had already accomplished at that period in time.

The song "Runaway" features Mike Herrera (MxPx). How did this cooperation happen?

A: Our drummer, Dango, grew up listening to MxPx and had the chance to play the song “Responsibility” with them at Warped Tour awhile back. They’ve kept in touch ever since so we had Dango give him a call and ask him if he’d like to do a guest vocal spot on a song. I had already come up with the melody with Mike’s voice in mind on this song in particular so I’m glad it worked out.

A: I have a lot of idols and influences but I’ve decided that my all time favorite idol/influence is Blink 182. They are the sole reason for why I wanted to be in a band playing the music we play today. The list of everyone else would just be too long to write out!

You participated several times on the Warped Tour. How important ist this tour to you and how did it change in the last 4 years?

A: This tour is like the foundation that our fanbase sits on. From our first Warped Tour in 04 to now we spent everyday of it standing out front near our tent asking people to listen to our music. We’d start at 11AM and go to 9PM, then we’d hit the parking lots until 10PM. It was a lot of hard work but we are finally starting to see the benefits of that work pay off. As far as the tour changing, I don’t think it has too much, it’s generally the same tour every year with the acception of artwork, bands, and bands! Haha.

Meeting so many bands a lot of crazy things happen. Do you have an interesting story to share with us?

A: Unfortunatly I don’t, because we’ve spent so much time with our fans we’ve missed a lot of opportunities to hang out with a lot of bands. It’s hard to balance the two but we feel like the majority of our time should go to the people supporting us and as a result I think we’ve created some bad blood between us and the world of bands but what can ya do?

When can we expect you to tour Germany?

A: We’ve yet to get out of the US as far as touring is concerned but we feel that leaving the country is long overdue and we are looking at maybe heading over in the winter of this year (2007). Keeping our fingers crossed of course.

A: Thank you to everyone who has supported us and we have heard great things about the fans in Europe so we are excited to come over and have some fun with you all!