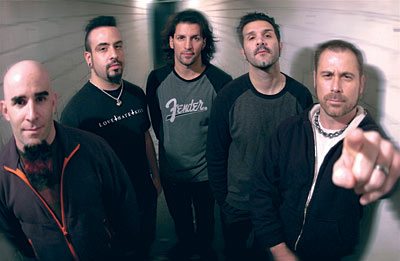 Q: First of all can you tell me something about the reunion?

B: After time you wanna revisit something that was really good, and I think why not. I dont know many things others than those plus we were a great band together, the five of us. It works, and we dont have any problems individually and personally, and the friendship was still there. It was just that people moved on with other like, say the vocals. They chose to do something different with the vocals, but it was good enough to come back.

Q: Did what happened to Dimebag have anything to do with Anthrax reuniting?

B: Yes, there is things like that, too, although that didnt come from me, although I agree. That probably came from Charly. He just sparked the idea, and it makes sense, too, I mean, why wait! You gotta take advantage of the opportunity, and of course other people have other reasons why were coming back together, what for, and I say: Why not?! We have a great band, we play so well together, it is even better than it was before, and that makes it more fun.

Q: How much did the death of Dimebag influence the band?

B: It is just a tragedy. The whole thing of being in a band and go out and play and have that kind of thing happen to somebody who is so great. I dont care who it is it just makes you sad and it makes you feel different. It is always in your mind, such a horrible thing. My friend was there in the front with his wife that day, and he saw it happen, and said it was just disgusting, just witnessing that was too much.

Q: How much did the music of Anthrax change over time or hasnt it?

B: Well, we havent gotten anything musically new, were just playing the old stuff. That remains to be seen, and if it stays like that we will probably put out another reocrd together if we keep that vibe. We need to get together and talk about it, it just keeps circeling, the idea. Weve been taking step by step by step and mainly touring.

Q: Were do you see the difference in the influence in the music you have had in as a sort of pioneers of hardcore or crossover back in the days? 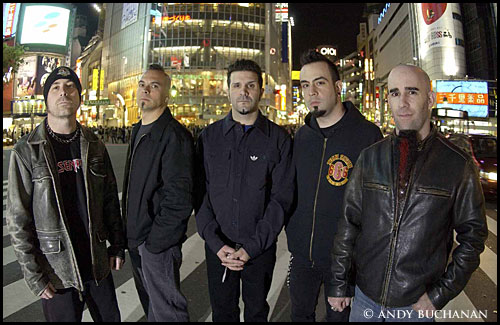 B: I love to meet people that are into seeing us or meeting us likewise them, too. I love to see a lot of new bands and I love to hear them say: Yeah, man, I cant belive youre into our band! or that I like their music, but it is a really neat thing. It is almost like being a pro-football player and meeting people that like you, so, it is great. I mean, I am not going out there like: I am better. Youre not as good as me. I am much more popular. We dont get a lot of that. It helps to feel good about what youve done.

Q. So what about the scene in the US?

B: There is a lot of good music going on, and I think a lot of things are coming back. It is almost as if it is a surprise that we are together or they cannot believe that we sound like that now, but overall, there is quite a larger scene of types of music. There is room for everyone to do something, and I think that Metal is coming back. I dont think it actually ever kinda left it just kind of simmered for a while, and now its starting to pick up again. I am happy about that.

Q: Where do you see a difference in touring the US and Europe or Germany in particular.

B: It is always different here because it seems like everyone is electric here. Everybody seems to be really, really happy to see you, and I am just so overwhelmed. In the States they are, too, but it just seems like people are loving it more over here. People are so excited about the bands over here. Like today, the whole day is just Anthrax. You can feel it in the air. A little while ago I met a guy on his bike riding by and he said: See you tonight! Its cool to see that.

Q: I read a lot about you getting on stage in your everyday close being not into the sort of Metal uniform thing

B: Its nice not to have to have certain uniforms. I mean, sure we have the shorts and stuff, but that was not to be different that came from a hot night, and we decideed to wear shorts and we dont have to the uniform thing, sure, we started to get all colorful stuff and shorts because we got a lot of free stuff and all kinds of stuff. I mean, I could go on stage like that, right now, just putting on another shirt and a pair of sneakers. Its all about just  go! You dont have to have a certain hair-do or anything, and thats good. Sometimes certain people need that, I mean, Dio, he has to wear a certain shirt with a certain fringe, it is just a certain aura that goes with it, and I dig it. But certain things just dont feel right and you cant wear them without feeling the need to get out of them.

Q: How was the time without Anthrax?

B: Its been different, you know, I have come across a lot of good musicians, a lot of different attitude both good and bad. People that wanted to play, and people that didnt want to put the time in it, so it has been a lot effort. I have written a lot of stuff, working at a studio and stuff, and just being able to do what I wanna do, and if itd be just cutting the grass or fighting around with my dog all day. I had time to do a few things, but I never stopped making music. I actually played in a cover band while I was home. I played drums and sang. In fact, before I met up with these guys for the last year, I was doing a three-piece doing Anthrax songs on drums and singing. And it was great, and people didnt know that I was singing and playing drums, so the lights would go down, and I get behind the kit and just played drums, and the whole night turned out to be really neat, and people werent expecting that. They didnt know I was playing drums, so everywhere I went it was kinda neat to do that.

Q: I read that Dan Spitz quit music for good after leaving Anthrax?

B: Yes he did. In fact now he is really a lot into it again. He came to my house like 3 months, and I got him back into it again. It was really weird. I could never do that. Even before I met those guys I was making music, I always played in a band. At highschool, 7th or 8th grade I played at graduations and I awlays wanted to be in bands. I listen to music constantly and I play it constantly. Its just that everything is music. It is a certain feeling that it is. It is very emotional. I mean, I could think of things and go into a whole different trian of thoughts while I listen to certain music be it soft or hard. 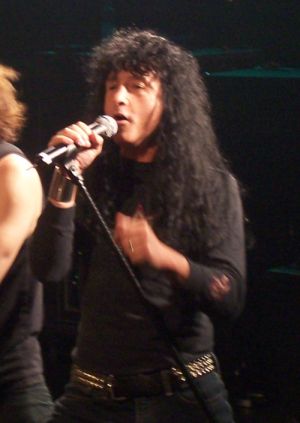 Q: How has it been for Ian Scott to be in Anthrax for 20 years?


B: Its neat, those guys, they are in their own little world. These guys are different, they are not as open as Danny and me. We both talk a lot, and Charly and Ian, they just got a different set-up. But we meet in the middle. I see them the whole day, but they are different. Franky, hes right in the middle. He hangs with us, he does with them, and then he hangs by himself, and then he goes to see Danny. Hes with all of us at the whole time. We are just a different bunch. It hasnt changed much. We almost know each other so well, that we already know what somebodys gonna say.

Q: So it was sort of natural for you to get back together

B: Yeah! In fact, thats what bothered me sometimes was that I think we could have kept going. You know, everything happens for a reason and stuff, but I think we would have gotten along great and done good. It was weird, that there was that parting. Plus, when you get back together with somebody and they remember somebody else that was there, it is kinda weird sometimes.

Q: So, what do you think the future will hold for Anthrax?

B: I think there is a good chance we could have a record. I mean, I dont know if we are going to stay together to be honest with you. As long as everybody is feeling good about what we are doing were definetely doing it for a good reason, playing well and making people happy, and ourselves. It is not that were doing it only for the money. I mean, that is not even the case. I could even do it myself for the same situation. Theres nothing really like having a bunch of guys working that good together, and well probably never find the chemistry somewhere else that we have with Anthrax. Unless these guys have other plans that I dont know about, I am rolling with it. But if that Aint the case, then Ill start another thing. I will always keep making music.

Thanx a lot for the great interview!