25.01.2008
Bane is a hardcore punk band legendary for its high energy shows, sing-along anthems, kindness and honesty towards fans, and promotion of tolerance and unity within the hardcore scene. 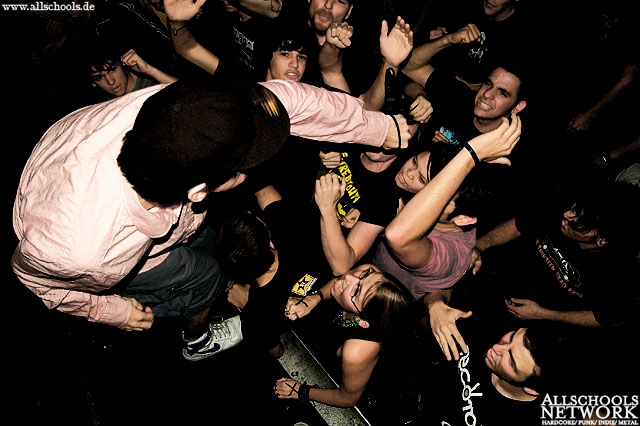 The band began as a side project between Aaron Dalbec (then of Converge) and Damon Bellardo. Inevitably Dalbec approached Aaron Bedard (who had previously sung for the hardcore band Backbone) about singing for Bane.

In earlier albums Bane claimed straight-edge (lifestyle whose adherents abstain from alcohol, smoking, recreational drug use, and promiscuity) however it was never their main political focus. They still perform early songs with straight edge references, such as "Count Me Out" which includes the lyric "Just like this X on the back of my hand, I'm not going nowhere". However, the lyrics to the song "Wasted On The Young", on Bane's latest album The Note can be interpreted as criticism of people who ignorantly claim straight edge too early in their life.

Roya Butler and Hannah Wagner sat down with Aaron Bedard upstairs at The Knitting Factory in New York City to get personal about their most recent album, “The Note,” and experiences on the road.

Tell us about your newest release. 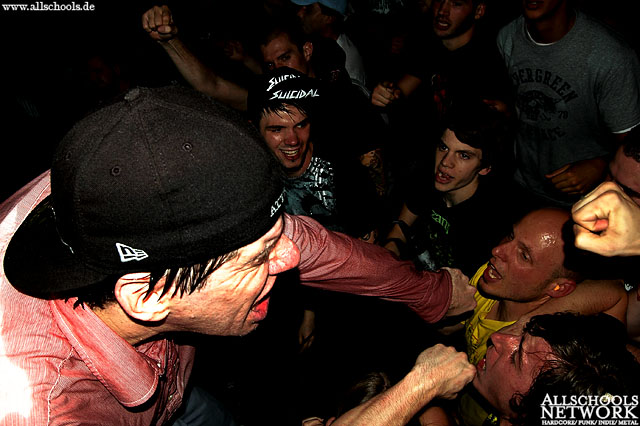 Aaron Bedard: Well the album actually came out a couple of years ago. It’s called “The Note.” We worked with the same producer that we’ve worked with through all of our recordings and we’re just really-really happy with it. It came out on Equal Vision Records. We toured on it pretty extensively in 2005 and 2006, and now it’s time to start thinking about doing a new one.

Tell us about the fakie tour you’re doin right now.

Aaron Bedard: Yeah it’s just so small that it’s hard to call it a tour. But we’re doing five shows around New England and a couple here in New York starting tonight at the knitting factory. We’ll go to Albany. We’ll play our hometown of Worcester, MA on Saturday and on Sunday we’ll play some new place called Avril. And all of our shows are with bands that we’re really good friends with, so we’re just excited to be around all of our buddies this weekend. Next weekend, we’ll fly to California and do eight shows up the west coast where we haven’t been in over a year. So we’re really excited to get back out there, because obviously the scenes are really hoppin’ up there in Cali and we have a lot of fans. The shows are always good. Then after that we go to Japan.

Tell us about the festivals you’re playing in Japan.

Aaron Bedard: We were invited to play a couple of festivals – one in Osaka and one in Tokyo. So they are kind of paying for us to fly from California to Japan and back. We’re only going to do two shows, so we’re not going to be there for very long. Usually when we go to Japan we do two weeks of shows, but it’s just going to be real short – in and out, bing-bam.

Why haven’t you done a lot of touring this year?

Aaron Bedard: Our Drummer just had a baby this year, so it’s been harder for him to get away. That’s pretty much why we haven’t been doing a lot of touring; this is the first time that he’s been out on the road with us since the kid came, so this is really exciting for him. But he was like, “It’s gotta be two weeks. We gotta do the whole thing in two weeks.” So, two weeks between Cali and Japan and then he’ll be home. I’m actually going to stay in Japan with a friend for four or five extra days and just chill…buy sneakers and stuff.

Yeah, I heard they have a lot of cool sneaker shops out there.

Do they implement hip-hop in their fashion, as we do in the US?

Aaron Bedard: Yeah, some of it’s real hip-hop, for sure. They’re just real obsessed with anything that’s American and street.

I’m assuming you got your name from Batman comix.

Aaron Bedard: Yeah, that’s one of the things that inspired the name, for sure, was the dude that broke Batman’s back. I really like comic books. So yeah, that’s how the name came up. The line up now’s different than the line-up that we had in the beginning. But there are four of us that have been in the whole time, and drummers have come and gone as we’ve gone along. But once he left Converge, things just got real serious for us then, and we’ve done a lot of records since then and have done a lot of touring. We’ve been really lucky to just go all over the place and just play music that we really love. We’re really lucky.

What do you think is the difference between the Hardcore scene and the Metal scene? 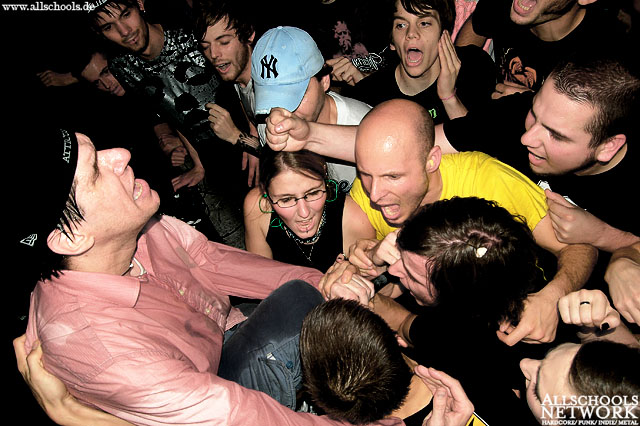 Aaron Bedard: I guess the main difference that I can see is that Hardcore always seems to be – I don’t know the metal scene very well so I can’t speak for them – the difference for me is that Hardcore always seems to be about just more realistic view points. The songs are of a more personal nature and try to confront issues a little more. Metal just seems to expand. You can sing about anything. You can sing about dragons and warriors, or you can sing about fast cars and fucking chicks. It’s just way more grandiose. And also to play Metal you have to somewhat talented, and to play Hardcore you don’t have to be really that talented of a musician. You just have to learn three chords on a guitar and beat the fuck out of your drums and be a punk band. It’s kind of one the things I’ve always really loved about Hardcore. It’s really created just by kids who are angry and confused and displaced and just want to scream about it. Whereas Metal, is a little more epic with guitar leads and fancy drum solos.

What do you see as the differences between the Hardcore scene in America vs. in Europe and also Japan?

Aaron Bedard: Well in Japan the kids are just so sweet, and they just love the image and music so much. There’s no attitude. They’re just giddy that you’re there. They’re so fucking happy that American dudes came to play there this music that they love. So that’s just the most positive, heart-warming vibe imaginable. In Europe it’s just so wide, and there are just so many types of scenes. The one that stands out the most is Germany, and German kids are just really blunt and confrontational. If something on your t-shirt offends them or they’re not happy with the style that you band is going in they will just straight up tell you in this very point blank way. Like, “I think that your stuff sucks.” Or, “What is wrong with your government?” And they’re just a little more, I guess confrontational would be the word, or they’re just more up front and forward about things.

How does that compare to the attitude of your fans in Japan? 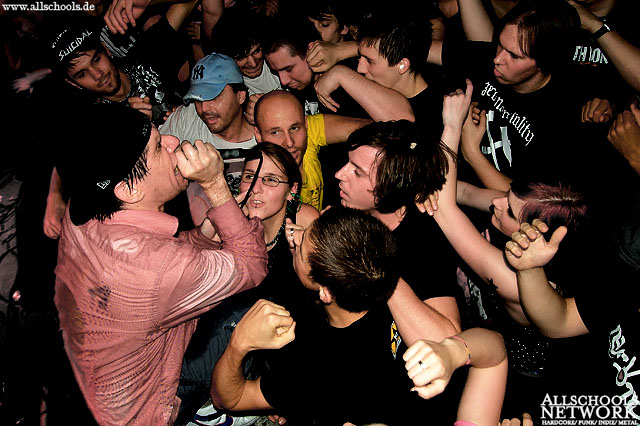 What do you think makes up the differences in attitudes?

Aaron Bedard: German kids are just maybe a little bit more spoiled; they just have more bands coming through, and if they think that you’re full of shit, they’ll just tell you. It’s something to respect on some level, but is just a little awkward.

Aaron Bedard: I would say in the U.K. its becoming way more Americanized. There’s a lot of tough-guy bullshit, and a lot of gangs starting out, and this crew mentality that I think is really detrimental to the Hardcore scene. It seems to be taking over more and more in the United Kingdom. You hear about a lot of fights at shows, and a bunch of stupid bullshit like that. They’re a little bit behind the times, it seems.

So I guess America sets the benchmark for the Hardcore scene across the globe?