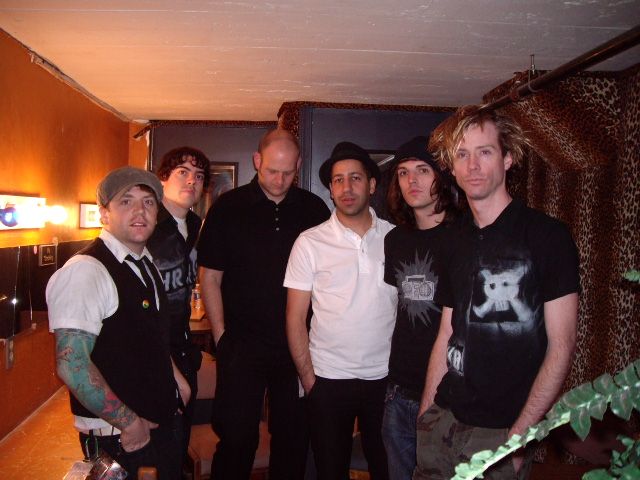 Big D and the Kids Table formed in Massachusetts in 1995, creating their own brand of Ska music, typically reflecting on their personal lives. Winning the Boston Music Awards distinction of “Outstanding Ska Band” in 1999 was just the beginning of their rise as one of Ska’s elite underground bands. Although they have participated in Warped Tour, and Summer of Ska Tour, as well as touring in support of Rancid, Anti-flag, and Vodoo Glow Skulls, Big D and the Kids Table are extremely down to earth and make sure they their fans are always top priority.
Interview with: David McWane, vocalist; Steve Foote, bassist; Dan Stoppelman, trumpet; by Roya Butler.
How did you start out?

McWane: We started out because we were all about eighteen years old, and we had nothing to do anywhere because we weren’t old enough to buy beer and we weren’t old enough to go to liquor stores. So all we did every week day and weekend night was play. And the reason why we have horns is because they didn’t have anything to do either. *laughs* So we invited them and uhhh we just try and write song so all of our friends can play together.

What got you into this genre of music?

McWane: We all wanted to be a ska band because we had horns, just flat out. Since we had horns, we were like “what style should we play?” We didn’t take the band seriously, we were just playing and slowly people were like, “Hey do you want to do a show?” We were like “sure,” and then more and more people asked us to play. So we became a band accidentally, from just jamming and having fun.

When did you get your first big break?

McWane: *Laughs* I don’t think it’s come along yet. 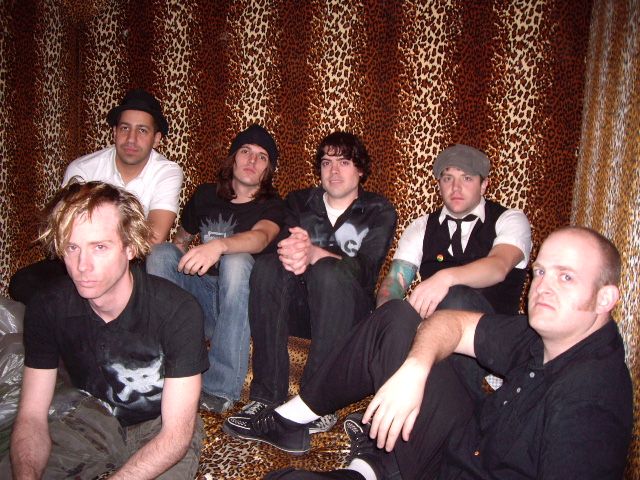 Tell us how you first got noticed, then.

McWane: On the 2005 warped tour, we were on the Ernie Ball stage, which is kind of smaller, but it’s a great stage. We weren’t on the big inflatable schedule that they put up, so we would wake up everyday and hand out like 150 flyers, 150 – 200 stickers. At the end of the warped tour, a band guy came up to me and said: “You know what? Kevin Lyman notices that stuff. You guys are going to impress him by how hard you’re working on the warped tour.” And all I kept thinking was there is no way anyone is going to notice how hard we worked on the warped tour, because we had already been a band for like eight or nine years. So a year and a half later, Kevin Lyman and Jo Sib and side one called us up and said: “Man you guys work really hard--you act like you’re a new band” and they were like “We want to put out your record.” So actually working hard helped out in the long run.

Tell me about your new album. 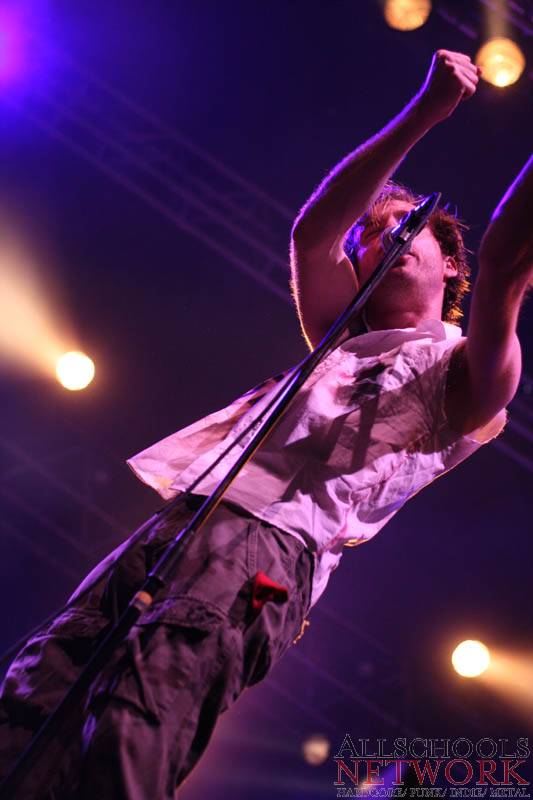 Foote: We’re really proud of our new record Strictly Rude. We’ve worked harder on this album than anything we’ve ever done before. We were originally working on reggae Dub record, Check, Check, Check, when we noticed that there were a couple labels checking out the band. As much as we want to finish up our reggae record, we put it on hold, and started writing some more songs that were typical Big D. We put together the record with Side One Dummy on bored. Side One suggested we work with Joe Gittleman (bassist, The Mighty Mighty Boss Tones) who also works for the label. We couldn’t believe it! Gittleman was in a band we all respected and listened to since we were young, and we had the opportunity to work with him--it was unbelievable! With his help we shaved down the original 40 songs to about 15. We worked really hard with Joe, practicing everyday for a couple of months, then going into the studio and hammering everything out. It was really cool; we got to experiment with different effects/more Dub on the Reggae side. We felt like we pushed the limits of our creativity.

Will you be doing more Reggae Dub on your next album?

McWane: I do believe so. Our album out now is called Strictly Rude—the next one is going to be called Strictly Dub, and then we plan to put out Strictly Thrash. We write the music based on our mood, so we will probably be writing the strictly thrash songs at the same time. So I bet both records will be written at the same time, but then one will probably go out of the gates quicker then the other one. It’s like we kinda go with the flow. We will always be open if Dan comes through to practice and is like I know we are writing the Dub record, but I got a kick ass thrash song. Were not going to like go, (Deep voice) “No Dan!” *laughs* Because we are so into the three styles, we like Ska, and we like Thrash, and the Dub stuff, so …The albums will write themselves; we just kind of wait for it to come out of us.

Tell me about your book.

McWane: It’s called the Gypsy Mile, and it comes out April tenth, technically. And it is basically all the lyrics from 1996- 2007. Because the kids on the internet were like “Jesus Christ where are your lyrics?” and I was like “oh, ok, I’m sorry” and Dan helped me proof read them--thank you very much Dan--and I’ve learned a lot of grammar from Dan. It’s basically tour observations. We’ve been touring since we were18. We’ve looked at society from the outside for so long, we have an innocent outlook. I’m older, but I’m allowed to look at life in this kind of youthful way-- kind of not like being trapped in the, as Noah Chomsky says “Wage Slavery,” you know what I mean? We get to break out of it and ask ourselves what’s important. What is your escape? So it’s nice. It’s a good look at life from someone who has been traveling since they were eighteen; it’s a solid reminder of what is not so important. 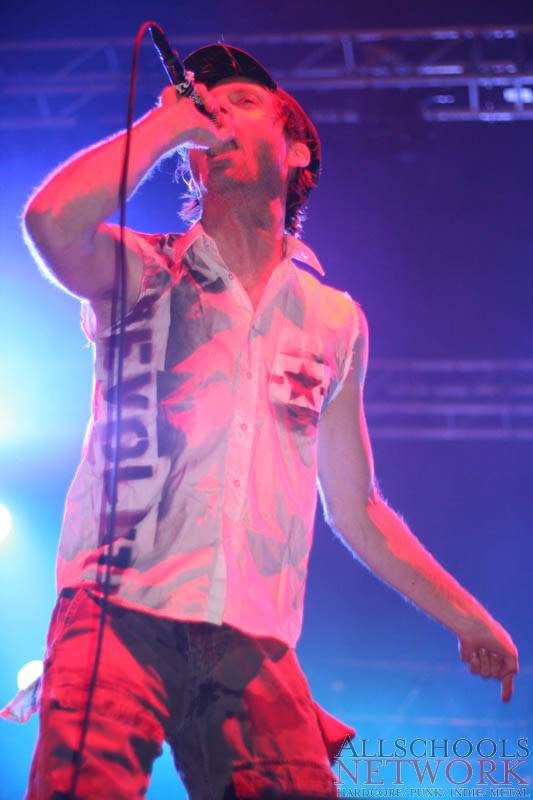 Stoppelman: I think we had a really good time in Chicago on this tour. I think overall Toronto was awesome. Boston, of course, we are from Boston. It’s really a treat for us to get to play places like Prague, Czechoslovakia, and Switzerland. We are hoping to get to play in Japan someday. But we have been working on it forever and it never happens, hopefully maybe this year is the year, but who knows?

Foote: I would have to say that uh I agree with Dan. Toronto was one of the best places to play. I’m also awfully fond of Montreal; the band seems to have an amazing fan base that comes out and wants to have fun. I’m a big fan of Los Angeles, but its mostly because most my family and high school friends and stuff are out there so its like good to hang out with my boys and play and show them that I’m not a complete low-life-scum that like can’t afford to pay the bills and has to borrow money all the time and what not. I’d say internationally though, I love playing in London. There is just so much culture and so many things to do in London. Usually we get at least like half a day to hang out and walk around and go shopping in all sorts of crazy places that we don’t normally get to see.

McWane: I guess my two most favorite places to play are odd, because they are the most uncomfortable places to play (little hole in the wall places): Orlando Florida and Wilksburry, Pennsylvania. Both those places remind me of photos I saw when I was little, of like Minor Threat shows. You know, I was so small, and I saw these black and white photos of these shows and I was like “Where the hell is this happening? Who are these people? How do they all know what they are doing?” You see it sometimes at The Social and Café Metro; the kids there are just so much more super charged than any other places I’ve seen--like they do back flips off hand railings of staircases and bars. They’re stage diving so much, the PA’s are falling! It’s just total chaos. I think those two places remind me of the way I hoped shows would be when I was little.

How is touring with Anti-Flag?

McWane: So far its been kick-ass. Again, I just kind of compare stuff to the past, but this tour is a lot like when I was growing up where Converge would play with some weird band. And here we are, a Ska band, playing with Anti-Flag--political punk…but you know, it’s bringing in four groups of completely separate fans, and it’s really funny because the tours are breaking down the walls, and I think that’s respectable.

Stoppelman: I was going to say, along the same lines, that it is really cool of Anti-Flag that they put this together. I mean they hand picked the bands, they took a chance, and didn’t do just the comfortable tour (playing with bands of the same genre), and I think that’s really cool. They have been really nice, and really helpful to us, and that’s awesome. And it’s been cool that the crowds have been really receptive for the most part, open-minded and willing to check out another style. So it’s been good for us.

Tell us about your new DVD.

McWane: It’s basically a guide to everything we’ve learned while on tour all these years.It’s called “Built up from Nothing.” We were lucky enough when we started out in 96’ to always have a video camera with us. We basically wanted to make a DVD that is kind of an Anarchist Cookbook of ‘How to Tour’. It talks about places to stay when you’re on tour (where you can sneak in, cuz they don’t have hallway cameras), and how not to get screwed around by bookers/promoters, hints like making sure to not leave your cash box under a sweat shirt in the front bench of the van, cuz everybody knows it’s there. It’s basically just a lot of things that you’d think are obvious, but aren’t--everyone goes through the same trials and tribulations. It’s backing up the fact that something is a guarantee: you drive like eight hours and your supposed to get 150 bucks and the promoter is like “I got seventy” and then you might think, “well, I understand because I want to be a cool band guy.” But what you’re not realizing is, he does have the money--he is just checking to see if you’ll take it from him, you know? They will check, you know? And like 80% of the bands will be like “oh, ok that’s cool” or you can be like “No, that’s why its called a Guarantee” and he’s like “ok, I can’t swindle, but you I’ll swindle the next band.” It’s the little things that help out, which is why it’s called “Built up From Nothing”.