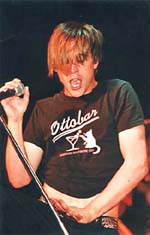 How are you doing? How is your time in Germany?

Ian: Its good, we really love to come to Germany so its cool to be here again.

John. Ive got my second cold by now for some reason...

John: But I dont want to bother you with my cold, its ok right now...

Ok, so I guess you dont get annoyed of touring the world?

Ian: That is the only thing that is worth getting sick the whole time. Usually it isnt that bad but we all sit in the same bus so it happens really fast that we all get sick when one has a cold. But Im fine with it...

How was the tour so far? Especially the dates with Samiam and the Subways? You feel in a way related to Samiam? You know their music?

Ian: Its great too, both of this bands. We got the chance to see and meet them for the first time. Ive never got into Samiam. Ive never heard of them before but it was cool to see them live...

Are you wondering that there is such a huge interest in Billy Talent? I think that your whole tour is sold out for about 3 weeks! How do you feel about this?


John: Thats really amazing, when we think of it...

Ian: It seems that every time we come back to Germany the locations get bigger and that there are even more people who want to see us performing.

So you see it as a positive or negative aspect to play for such a huge audience or would you rather play in a small club for 300 people?


John: Oh, thats no problem because we still get the opportunities to play in small places. We went to Paris for the first time and we played a really small show in front of 200 people. So just playing is one of the best sides, either at the Hurricaine Festival in front of ten thousand people or like today at this place.

Ian: Usually we play in smaller places when we go out for a tour. Only in Canada and in Germany we play the same size.

So you left the clubs?

Ian: Yes, but in the end it is only in Germany and Canada like this.

Ive heard that you covered a several times the Fugazi-Song Waiting Room. So how is your relation to Fugazi and has this kind of music influenced you?

Ian: Yeah, we are definitely big fans of Fugazi. We started covering Waiting Room I think four years ago and

John: We really played it a lot

Maybe you can play it tonight?

You are part of a Major but you also covered a song of Fugazi, a band who represents with Dischord Records the underground. See a conflict?


Ian: I dont think that even Ian MacKaye cares a lot about this major labels vs. indie labels. Most of the indie labels are owned somehow by a majorlabels or have some kids of contracts with this so called indie labels. For my part Dischord Records is the last real indie label. We dont care as much about the fact being on a major, especially with the internet and MySpace it doesnt matter anymore if you are on a major or indie because people get the music anyways.

You mentioned the internet and MySpace. What do you think about filesharing? You regard it as a negative or as a positive aspect?

Ian. I think that its great.

John: As long as the people get into our music were fine with it. Its ok when more and more listen to our stuff. It doesnt matter how they get the music but its important that they listen to it.

Ian: The more fans get into our music, no matter where they got them from, the more we have an advantage of it. It doesnt matter if they heard the music on MySpace or bought the record in a store or heard it at a friends.

John: For us making albums wouldnt be anything worth if nobody could listen to them.

Ian: Even if somebody doesnt buy our record, maybe he still comes to our shows.

John: Those people are our fans so I cant get mad with them because they downloaded our record.

Interesting opinion because there is a huge debate about filesharing.

John: The kids dont have the money to buy all the records they want to, so its good that there are other ways. We did it the same way with tapes...

I regard it as an interesting fact that you are from Canada and at the moment you can see a lot of bands like Alexisonfire, Boys Night Out or Billy Talent who have big successes in the USA and in your case in Europe, so what do you think, have we got something like a Canadian wave at the moment?

Ian: I think in Canada the whole music industry is still so small. Maybe ten years ago some bands went out and had such a success that brought some effect to our music-scene. I think after the success of some bands like Grade, which is a good example because they got signed in the end by Victory Records in the USA; the whole independent music scene became more chances to release their records. You have tons of bands in Canada who release their records on major labels, indie labels and on the internet

Jon: Another important fact that provides the younger bands is the Warped tour which comes to Canada and local bands always play on warped tour and that happened the last ten years and helped to get a base for young bands. The internet is also an important factor 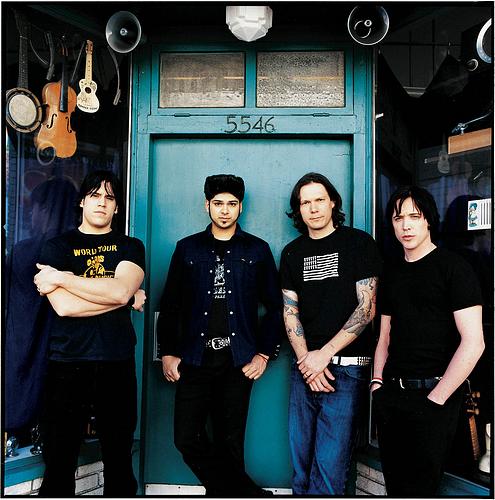 How is your relation to other Canadian bands, like Alexisonfire, Silverstein and so on?

Jon: Were close friends with Alexisonfire. We went on tour a few years ago and we live only one hour away from each other. We see them all the way and we know a lot of people in the music-business who also work for them. Maybe you can see us playing in Germany one day

Ian: Yeah, they are really huge in Canada

Jon: Its time that they change the size for themMaybe it will happen the same way like it happened to us. Every time they come back to Germany the venues get a little bit bigger

How did the success changed your lifes? Are you still able to go out on street in Canada?

Ian: Nothings really changed except the fact that we lay down our money in our houses and stuff like that. We can afford a better living but on the other side the most time were on tour. And usually the people think when you have success youre immediately a millionaire but we dont earn more than other people who have a normal job.

Jon: People even dont recognize us, only when we play a show in the same town but usually its ok.

Okay, another thing that I regard as interesting is that you have a link on your Homepage to your old band Pezz, which can be described as more progressive. How comes?

Jon: Its also to show, that it is an important part of us

Usually bands hide their old projects and are ashamed of it

Ian: Its nothing we have to be ashamed of. Its a part of Billy Talent, even if it has nothing to do with our music today.

Do you think you will go again in such progressive direction one day?

Jon: Actually, I think we went out to do this progressive style because we wanted to show the people what we can do. They should hear that we are good musicians and all this crazy things. We got sick of this style of music and that was also the time when we had the problems with our name Pezz because there was another band with the same name. We changed into Billy Talent and started something musically what we all like.

Okay, another think I want talk about are ticket prices

Jon: Oh shit! Is it too expensive?

I think everybody has to know it for himself how much he/she wants to pay for a concert. But actually the tickets have been sold for 25 and plus shipping and this stuff you paid in the internet 28-30. What do you think about this?

Jon: We dont want to have high ticket-prices but the problem is that the communication from America to Europe doesnt seem to be the best. That really sucks! We come to Germany and we are asked how expensive our tickets are and we have no ideaSadly, its true that we usually have no idea about it

Ian: We shouldnt take more than 25 and if we would take that much we should play with more than just one band together

You are also quite active in some organizations. Tell me something about this!

Ian: We do a lot of things because when you are in a band you have a certain level of influence and charity organizations are important and we can tell people about them and make them think of it and organize themselves. We recorded a song for the AIDS-conference and we donate money for the organization Free the children.

Jon: We are also part in the Make poverty history-campaign. We helped an organization which is called the Kids-help phone with our Video to Nothing to loose. Each time the video was played in TV or Radio the organization got some money.

Ian: Well also play a benefit-concert for the Ernesto Side.

Jon: Well play with Alexisonfire and some other great bands 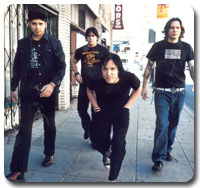 Jon: Yeah, it will be a small show with about 1000 people in a theatre. We also recorded a cover of John Lennon and the money will also be founded for the work of Amnesty International.

Okay, to come to an end: What will the future bring for Billy Talent? What can we expect?

Okay, do you have any last statements?

John. We have really to thank the German people, its really going great here and the people are really thankful and nice to us.

Ian: We really appreciate that so many people come to our shows and listen to our music. Its amazing.