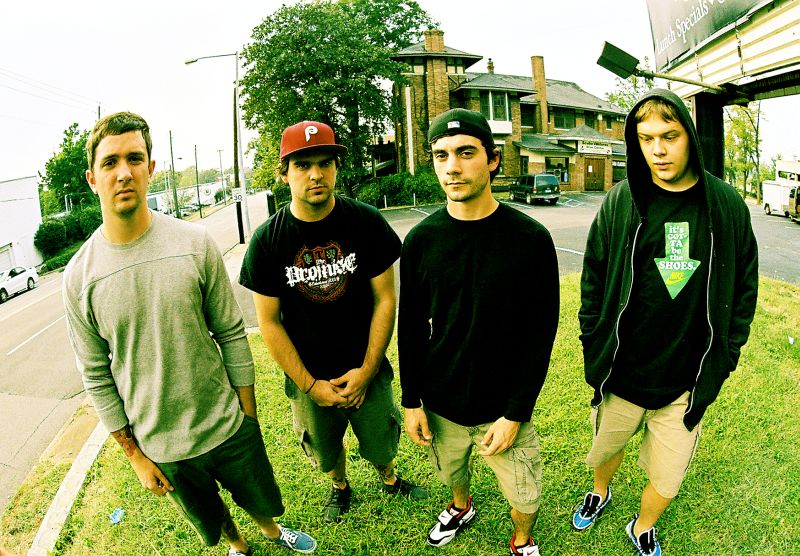 1. Please introduce yourself for the unknowing people?

My name is Tim, I play guitar in Blacklisted.

2. Have any members of the band played in a former band or is actually playing in other projects?

George (the singer) and I did a band called No Rights. I was in Some Still Believe, Damage II and obviously No Rights. George sang a show or two with a band called Ransom. Shawn and Chris (drums and bass) were both in Punishment at one point and Chris is involved in some underground Death Metal groups.

3. What do you expect of the european tour with Terror and Donnybrook?

Lots of raging!!??!! Haha, we couldn't have asked for a better tour. Both bands are good friends of ours and it's like the ultimate package. Should be tons of kids at every show and everyone should get along. We are just grateful to come over and play to kids who wouldn't see us otherwise.

4. What are your favourite european hardcore bands?

I'm really into Dead Stop, and Justice is pretty good. The new Rise and Fall is awesome, and I'm pretty into Razor Crusade too.

5. Give us some words about the Philadelphia scene. Whats special in your town?

Our home shows are most special to me. There really is no place like home! As far as the whole scene goes, it's really starting to come up, two years ago shows were in one basement, now the hardcore shows are getting alot bigger and things are really rolling.

6. How do you get into the hardcore scene and when do you start?

I got into hardcore thru skateboarding and punk rock. When I was like 12 I was skating everyday and listening to whatever fast punk I could get my hands on. Then someone handed me a tape with Minor Threat on it, and shortly after I got a 7 Seconds tape. There was no turning back after that. I didn't start going to shows until I was 15 or 16 and my town didn't have many hardcore shows, so I was rocking out at punk shows every Friday night!

7. "The Beat Goes On" is one the most promising hardcore albums of 2005. How many work is into such an album like this?

Truth be told, Shawn and I spent about three weeks in the rehearsal studio. We had so many ideas the hardest part was getting our brain waves to connect. This was the first time we had worked on something for record! Once things clicked, we ripped thru it. We would kick out
three songs one day and spend the next five days on one riff, haha. We have already started working on songs for the next album, so you can expect bigger and better!

8. What´s your opinion about the momentary metal boom?

Everything comes and goes, I know that true hardcore will always be at the core and can't be swayed. If that's what you are into, good for you. I enjoy some metal, haha, Motorhead, Sabbath and Entombed. I can't solo and don't much like blast beats, so I'm in eternal exile of the metal scene!

9. Do you have any things to shout out that affects you?

I'm not exactly sure what you mean by this, but here goes. I would like to call out every kid that takes this shit for granted. For everyone that goes to a show just to be seen, or cause of the girls there, or to start a fight. Being on tour so much really puts things in perspective and you see from city to city where hardcore is a trend and where it is a state of mind. Some places kids are so grateful that you are there, playing three or four chords that really can help them thru life, and other places they just want to buy your merch for ebay. It's become really easy to pick out the genuine kids and the fakes.

10. So my favourite question! Tell us the worst story of your bandlife! What happend that makes you laugh, cry,aggressive,...?

Last tour we did, with Mental and Iron Age. Two days in, we get denied from the Canadian border. We accept our loss and have a couple days off to drive about 20 hours. We grab some pizza and hit the road. 30 minutes down the road, we hit black ice, the van spins about 540 degrees and we fly off this embankment. Somehow the van didn't flip, but the trailer has ripped off the back of the van and is upside down in the snow. Everyone is ok, somehow. We get towed out, retrieve the trailer and get to a hotel. By an act of god, the trailer has minor dents and everything inside is perfectly fine. We crash at a hotel in hopes to get a fresh start the next morning. Not five miles into our morning drive, the hood (which apparently had been dislodged by the accident) flips up and smashes the windshield, like a complete spiderweb. It's sunday, no one is open to fix it and if we don't drive about 10 hours, we are done the tour. We ended up driving 700 miles with a shattered windshield, getting it fixed and getting to our next show right in time! During those two days, I just about cried, wanted to go home, almost smashed all the windows in the van and wanted to kill myself. That was the roughest it's ever
been, and hopefully ever will be!

Thank you for the interview, thanks to Johan, Suzanne, Niels and everyone else @ Reflections Records. Thanks to Marco and Ivonne at Avocado Booking and thanks to anyone taking the time to read this...see you soon!

BENT OUT OF SHAPE/THE BOLDNESS – Split