WE’RE NOT BRINGING BOYSETSFIRE BACK.

The Casting Out are currently touring Europe with Samiam. It’s their last tour before the break-up they recently announced. At the same time, BoySetsFire is rising out of the ashes. I meet Nathan Gray, singer of both bands, in Hamburg to take a moment to reflect on the past and take a careful glimpse at the future.

This is the last tour with The Casting Out before you’re going to break up as a band. What happened?
Well, the main thing is that Pat’s moving to California and it is getting to the point where there’s almost no original members left. It’s just me who keeps rebuilding this band over and over again. And after a while, it’s gotten tiring and depressing. You get to a certain point where everything seems to be working out fine and then *boom*. I can’t do it anymore. So I have to find a way to create something new that has people, who are going to hang out for it.

Tell me about the upcoming BoySetsFire show on December 5, 2010 in Berlin! Is that something that actually results from the break-up of The Casting Out or is it something you guys would’ve done anyways? It was perfect timing!
The funny thing is, HOW perfect the timing was. We decided to end The Casting Out and that was the moment that I got an e-mail from Matt (Matt Krupanski – Drummer BSF, Ed.) about the event in Berlin and if we should go for it. Nobody even spoke about that before. But I was like: “Now? Uhm…Yeah!”. Had he asked me that a week earlier, I would’ve said something like “Uhm, nahh…. I’m doing stuff” but now – I have no reason not to! We’re not really bringing BoySetsFire back… full on. We’ll do this show and then we’ll entertain ideas of doing other stuff. 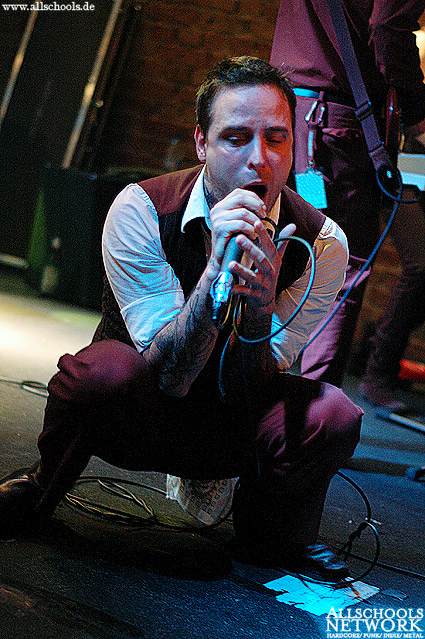 That’s what I was wondering about: especially considering that Josh has little kids at home and is also not really the fittest guy on earth (If you read this Josh – I’m really not referring to your mental health – in any way – seriously!, Ed.). How could you even remotely think about full time touring or doing a new record?!
Nobody wants to do that right now, I think. And I don’t think there’s been talk about a new record. Maybe we’ll do some shows. We obviously had fun playing shows together – so why not?!

I read somewhere that it’s not a full break up of The Casting Out but…
Yeah, I mean… we don’t want to say ‘That’s It!’ but it pretty much is. With my old feelings of bands I realized that we’ve gotten to a certain point – especially in the U.S. – where it’s like this: You either do it or you don’t. It’s gotten to a point where we need to do this full on because we’re finally getting some recognition or we dismiss it completely. At this point, when you call it quits – that’s pretty much it. People are not going to wait around for you. So I’m just focusing on what’s next. We’re doing this tour with Samiam and we’re putting on the best shows we can and we’re having a lot of fun. I really enjoy this band. I hate the fact that it is falling apart. It’s nothing I want to happen at all. But unfortunately this thing has hit a wall.

The Casting Out’s style got rougher on the latest record almost reminiscent of some songs on BoySetsFire’s record ‘Notes from the plague years’; with that experimental edge to it. Both projects have a lot of you in them and you do most of the songwriting –at least text-wise. Could you imagine covering you own songs eventually? For example, playing one of the more recent TCO songs with BSF?
When I do some of my solo stuff, I might want to revisit some of my songs that I wrote with The Casting Out, like ‘Alone’ and maybe re-invision them a bit. The solo stuff that I’ll be doing will be more laid back.

You wrote a note saying that you’ll be working with Chad (Chad Istvan – Guitar BSF, Ed.) and will be releasing a digital EP with a couple of new songs but also covering Bad Religion’s ‘Pray On Me’. Will this be an acoustic project?
Well it’s not completely acoustic… It is rather hard to explain…

Techno?!
Yeah! No! I’m not going to do that! (laughing) Nah! I’m not a techno guy! There are two things that it’s not going to be: Techno or Hip Hop. But it should be interesting! We finished the first original songs and the cover of Bad Religion’s ‘Pray On Me’, which sort of already has that country-folk feeling as a punk song. So, we just brought it back a little. It has the same speed but a lot of the guitar solos are harmonicas now and stuff like that.

I just pictured you in 20 years on stage with Chuck Ragan.
That would be funny but I don’t play guitar very well, so…

Yeah.. but Chuck doesn’t really sing that well either.. (laughing)
Yeah! Let’s join forces and go with our strengths!

When I talked to Chuck once, he talked about his plans to maybe publish a book eventually with lyrics or maybe a tour diary. Have you ever considered doing something like that?
No! I never thought about doing a book. No. Because poetry is… no. I am not a poet. It just comes out so contrived and pretentious sometimes with stuff like that. Plus, if I write a book with lyrics and stuff, it will come out silly. Whereas, if I wrote a book about where I’m going to talk about my life – I don’t think I want to put a lot of stuff out there.

I’m not sure if it would be legal.
There’s a lot of stuff that I would rather keep to myself. You know what I mean.

Sometimes, I think it would be great to have sort of a documentary of your own life with all the wicked moments and all boring moments cut together in a really fast sequence..
Yeah… But there’s a good bunch of years where there were no boring moments and I sure wish there were.

Tell me about The New Recruits – there’s not much online yet. It will be a project with BoySetsFire’s bass player Robert Ehrenbrand from Germany.
You won’t find much on the net, yet. We’re just setting up the first couple of things. Robert sent me a bunch of music. So, when I return from this tour, I can add lyrics to them and then I believe we’ll release the EP.

And it’s all German guys? Do you know what you’ve gotten yourself into?
Yeah it’s all German guys. There are 2 guys from Flyswatter and Robert from BoySetsfire and me. And there’s this drummer that I don’t really know that well but he seems like a nice guy. We’re going to do a five-song EP and then we’ll play a couple of shows over the summer. And then we’ll see. It’s more of a fun thing. Right now, I’m just trying to find out what’s going to be my main focus. I need projects. I am a very driven person. I need to be touring and to get things going and to be working, basically. But right now I’m not doing that. I need to get things going or else I’ll lose my damn mind. I can’t just sit at home and do little projects here and there. It’ll drive me crazy.

I know what you mean. The other day, I also send a cry for help out: I need a hand for the door to the future. It’s stuck.
Starting all over again is probably easier than what I’ve been doing until now, trying to keep this thing together. So, doing something new is probably going to be a hundred times easier! The people are a good cast, good people. With The Casting Out it was exactly what I wanted to do full time. My first impulse was to do the same thing again. But I don’t know if that’s what it’s going to be. It’ll depend on who I’ll get involved with and what it’s going to be. I don’t want to do the same thing twice. I just don’t want to be that ‘1-trick-pony’ type of person. With the next thing, New Recruits, is very different. It is definitely melodic like The Casting Out is but in a totally different vein than The Casting Out is. It’s definitely some Rock ‘n’ Roll mixed with The Smiths and maybe even some old Manchester stuff here and there. At least in my head that’s what it sort of sounds like. It’s interesting. It’s cool. It’s something I’ve never done before and it’s fun to do! I’m also trying to get Josh and his son Jonah and my son Simon together to do something. That’ll be so much fun. It’s going to be called Characteristics Of A House Fly and it’s really just noisy and crazy.

It’s going to be like a father-son-picnic thing! Good luck with that and everything else in the future!
Thanks!