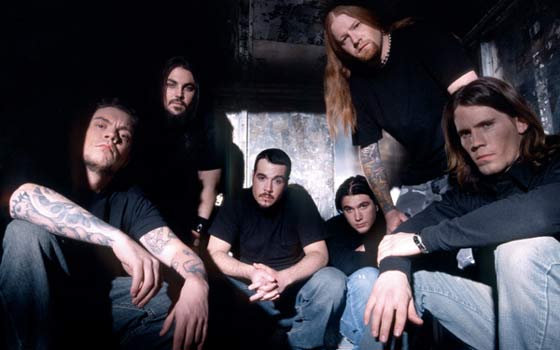 Hello! First of all give us a short introduction of the band.

Hi- Were Chimaira- Were from Cleveland, Ohio, USA. We like to play metal, and appreciate a good nights sleep.

Tell us some words about your new self titled monster. Are you absolutely satisfied with the final result?

Yes, completely satisfied. After months of hard work, its great to finally see our ideas come to life. The whole concept of the record started as vision, and now the reality has become more then I could have ever expected.

The new record is more technical and fresher than the old stuff. What has happened in the development of the band?

Playing show after show together, and studying the craft of songwriting, we knew that this record was going to require a lot of thought and inovation. We knew that this record had to set us apart from the rest of the pack, so we tried to improve on every element of our sound. I believe it was a natural progression.

There were some line up changes in the past. Is the current line up stronger than ever?

I definitely hope so! It certainly feels stronger then ever. Getting Kevin behind the kit has been awesome for us. In the past weve always been lucky to have excellent drummers, but they never quite had the passion the Kevin has. Finally we have a drummer that loves music as much as we do.

Chimaira is a very busy band. You´re constantly on the road. So is there any time left for friends and family?

Very little unfortunately. But touring is our bread and butter, and really the only way to spread the word of Chimaira. Heavy metal bands cant rely to greatly on radio and video exposure. Therefor all we can do is play play play.

Chimaira has shared the stage with a lot of great bands. So which is the greatest you´ve played with?

For me personally, it was playing with Metallica at the Download festival in 2003. Metallica has always been my favorite band, and so it was a dream come true for me to play with them.

What are your musical evergreens?

Metallica, Alice in Chains, Pantera, just to name a few.

Which bands have influenced the music of Chimaira?

Is making music the best thing you can do in life?

Yes, not only is it what were best at, but its also what we enjoy doing the most. Its a great feeling to be able to play guitar on stage every night for a living.

Which was the most incredible situation in the band history?

Probably when we first signed to Roadrunner. That was a huge moment in our career, and enabled us to get our music into the hands of people all across the world. Not a lot of bands are given this opportunity.

What do you think about the European music scene and do you get more response in Europe than in the USA?

Our European fanbase is definitely more passionate about the music. Its great to see all of the fans come out to the shows even early enough to see the opening bands, and then still have enough energy to enjoy our show. In America, sometimes a person wont even bother coming to the show because maybe they dont like the opening band or even because maybe they dont like the venue. In Europe, its all about the music.

Which band is missing in your collection? Are there any bands you absolutely want to play with?

Wed love to do a full tour with Metallica one day, and although well never get the chance, it would have been great to play with Pantera, or even Alice in Chains.

Does any bandmember following another job or is making music your fulltimejob?

All of us dedicate ourselves fully to Chimaira. No one in the band even has time for a regular job.

What do you expect of the future for chimaira? 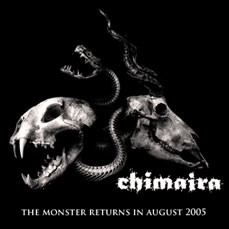 Hopefully we can gain a larger fanbase, and take over in the name of metal.

What is your opinion about the political acting of the bush government?

Im not politically informed enough to form an intelligent opinion.

Haha- while we were mixing our first LP, Pass Out of Existence, Maria was using the studio next to ours in the same building. One day, Mark wandered into our studio lounge, and Maria was sitting there, drinking champainge, and she was like, Oh, Im sorry! Is this your room? And Mark was like, No problem hunny, please use our room all that youd like!

Last words!
Watch out Germany, because Chimaira is coming whether you like it or not!