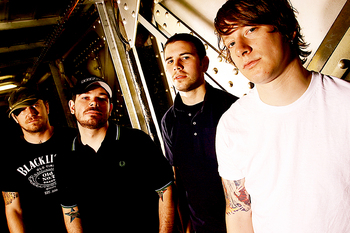 What´s the story behind the name COMEBACK KID?

A. We saw a paper headline one day referring to Mario Lemieux coming back to the NHL and it called him the "comeback kid". We liked it and stole it for our band name.

A. Things are good right now. Just super busy. We're in Japan at the moment with Verse and FC5, then we go home for a quick break before we head back to Europe and the UK right after our record comes out. From there we fly to Canada and start touring N.America. We're booked up right up until summer so its pretty crazy right now.

Why did you pick this title?

A. I liked how it sounded and its the title track of one of the songs on the album. The song is about the media/ powers that be constantly trying to instill fear in the public. If your people are scared they're easier to control. To me, its been a lot more apparent in recent years, but that also may be the fact that I'm getting older and noticing it a bit more.

A small comment on Scott quitting the job as CBK´s voice?

A. Scott quit about a year ago. He wanted to pursue some other things in his life and felt like he had done everything he wanted to with CBK. So that was fine. He is working on some other projects at home and is happy with that. We wish him the best of luck!

Now, that Scott left the band and you took over the vocal section (in a powerful and talented way!) and replacement Casey pulls strings, how did that affect CBK´s music?

A. Well I guess for me, its a huge change because I am singing now instead of playing guitar. Doing vocals definitely takes a lot more out of you physically. I think our sound is a little rougher now, but still has the melodic feel that it had before. It's just a little more diverse.

In which way are the new lyrics different compared to the old ones?

A. When writing Broadcasting... I had a lot of things on my mind and there were some things I wanted to talk about. I tried to stay away from some of the relationship themes and focused on some world issues as well as personal issues. Also, I used some songs to tell stories. Writing the lyrics by myself I think just brought a change to it altogether.

How were the reactions on the guitarist becoming the new vocalist?

A. As far as I can tell, its been pretty good. Scott is not easily replaced. I think we were scared that there would be some kind of backlash, but its been accepted pretty well at this point.

It seems to me broadcasting is more heavyweight than Wake the dead, slower and kind of depressive. The music sounds kind of dark, because it does not contain the shallow melodic hilarity of Wake The Dead. .Am I wrong? If not, did that happen on a specific purpose?

A. I don't know if thats an insult on Wake The Dead. I didn't consider that record shallow in any way. But yeah, we did something a little different. We wanted to give it more of an epic feel and I think thats what we got.

What are your plans for 2007? Can we expect you back in Europe?

A. We have tours planned in N. America, Europe, UK, and Australia right now. We will be in Europe late febuary right when the album is released feb. 20.

As a very hard touring band is there any spare time besides the band?

A. Sometimes not, its very hard to keep solid relationships ( romantically, friends, family) when we're always so far away. But this is the life that we've chosen. There are definitely a million benefits to it. It's all worth it when we have a room full of people dancing, singing along, and going wild. We live for it!

You´re able to see lots of different places and reach a lot of people. Is it helpful in any way, like spreading a political message or something?

A. Sometimes we share our ideas, sometimes we don't. We are all very different people in Comeback Kid so there is not one specific agenda that we are trying to put forward. But we do meet many cool people and enjoy spending time and talking. We all have different political ideas as well. We're pretty simple though, we like hanging out and playing music.

To which record are you really looking forward to this year?

A. I think Down To Nothing is recording soon. That should be cool. Sick City will have a record out this year too. I'm pretty out of the loop as far as new music goes.

What has been your favourite one last year?

A. Cancerbats - Birthing The Giant!

Anything you want to tell our readers?

A. Thanks for reading! New CBK album will be out Feb 19th. Check it out! Don't get too caught up in the daily grind.
www.comeback-kid.com
www.myspace.com/comebackkid