Im sure that it would be hard for you to live from the music you produce. So, what are your jobs?

How did you get your Band Name?

Derek- Well, it was a big toss up between the dead heart and dead hearts, one practice Jeremy had the idea for the names and we all pretty much agreed on dead hearts. Jeremy- I got the idea initially from a Midnight Oil song title and a Him Lyric Even though we are NOTHING like those bands, I though it had a powerful connotation.

What are your main influences? Are there some bands you admire a lot?

Josh- the clash and the ramones are my main influences. I wouldnt be doing this if it wasnt for them.
Pauly- My biggest influences musically are the Gorilla Biscuits and the Bad Brains. Jeremy- I like a lot of old classic Metal and 80s/ 90s Hardcore. I always kind of feel like naming specific bands and stuff leads people to thinking you SOUND like the bands you name off.
How would you describe your music?

Tom- I think we are basically just a hardcore band. I think sub-genres are silly and the music should speak for itself.
Pauly  I agree with Tom.

Tell us about your new Record! What is new? What is different when you compare the new Release with the old one? I think some of the new songs got a bit slower but got much more energy than the older releases on No Love No Hope. Am I right or completely wrong?

Jeremy- The new record Bitter Verses is our debut on a ferret and a more focused effort, I feel. All 14 tracks are brand new and help move along the concept. This record is all about insomnia and how it leads to fucking up and how fucking up leads to more sleeplessness. The other record werent as focused lyrically, or musically. We just spent more time on Bitter Verses.

Your new record deals much with themes like sleepless nights and insomnia. So how came the idea to build a record around these main themes? Who is responsible for the songwriting?

Jeremy- Tom recognized that some of the song titles had a similar feel early on when I started writing the lyrics. I proposed the idea of writing a concept piece lyrically and everyone was into it. I may have written the lyrics on the album, but everyone contributes writing the music. I had been working graveyard shift and it was just taking a huge toll on my life outside of the work environment and causing so much animosity in my daily life that I had to find on outlet for it. Thankfully, I have this band and great friends and family.

How was the work with your producer John Naclerio? Was it a good experience? Was it a help for you?

Josh-working with john was amazing. The moment we stepped foot into his studio, the vibe was there. John knows his craft very well. Id be stoked to work with him again. Pauly- John definitely made me feel right at home as soon as we started tracking, super laid-back, and really easy to get along with.

This question concerns again your life: On the one hand youre able to play with great bands like Comeback Kid and Bane and have many people who like your music but on the other hand you still have to work hard to earn some money to live. So how is it for you as a band; is it hard to be part of this kind of parallel worlds?

Tom- I think everyone in the band has a hard time with money when were on the road, but I always hoped I could do something like this when I was younger. You really have to take the good things with the bad things. In the end I think its probably worth it. It can be a lot of fun and I feel that fun is probably the whole point of living anyways.
Josh- I try not to think about it too much. If you spend all your time thinking about the monetary aspects, youll end up burning out real quick. Its just the nature of the beast, unless youre part of the lucky few who can do it for a living. But for the most part, having a dual life is par for the course when it comes to being in a band.

How is the work with your new label Ferret Music? What do you think about the bands who are a part of this label? You think you fit very well in this label?

Jeremy- I love everything about Ferret, Carl Portland and Rick are awesome dudes, theyve really supported us. I may not like all the bands on their roster, but I think we have our niche there, with bands like Madball and The Banner. I also really like ETID and we listen to the most recent Boys Night Out Record a lot in the van.

Why did you change your label? Any problems with Reflections Records?

In the states we were on State of Mind Recording. Johan at Reflections heard some demo stuff we had done after our EP w/ State Of Mind and offered to do a record. They had done a great job with my previous band The Control and it was great working with them again, it was always understood it was only to be for the No Love, No Hope ep. 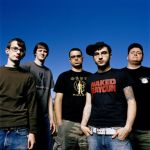 What do you think about Deals with Major labels? Would you say no to a Major?

Josh- major label deals are tough. I have a few friends on a couple of different majors, some dig it and some regret it. So, I dunno... its hard to say. Whatever the case, you better have a damn good lawyer.

Jeremy- We are NOT a Straight Edge Band! Im Straight Edge and so is Derek, The rest of the guys are not. Im 32 now and I think it helped shape my youth a bit, but now its just how I am, a part of my life for sure, but I am by no means an outspoken person trying to rally people to the movement, to each his own, I think.

How about touring in old Europe? When can we expect a tour?

Tom- All I want to do is go to Europe. Ive heard we were going like 4 different times now and have been let down every single time, but I think well end up there eventually. It seems like there is some interest in us over there.

Okay, thats it. Thanks a lot!