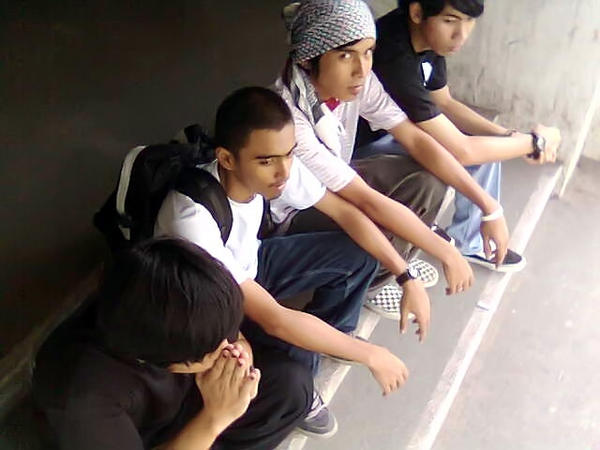 Failure was formed in June 2005 from the ashes of several Batangas City bands and is made up of four members including guitarist Patrick, vocalist Sam, bassist Francis and John on drums. Their style, while often defying description, consists of many recognizable musical forms including a heavy dose of hardcore and metal along with modicums of punk, screamo and other genres. That being said, they are influenced by a multitude of sources composed largely of hardcore and experimental artists. Failure started as a side project of members coming from different Batangas City bands to meld elements of different genres in an original sounding way. The original line-up was Patrick (guitar), John (drums), Sam (vocals), and Roland (bass). Early July, the bassist relinquished and Failure became stagnant for a while. Then the quest for a new bassist ended when Francis agreed to unite the band. With its current array, Failure befalls to be the instrument of obliteration it is today. This band has a tremendous amount of history together, being that Francis, Sam, and John have known each other since they were in high school. All musically inclined since then, they formed Waizted Tongue and played punk music during their sophomore year. It's pretty much been a roller coaster ride from their high school days until these three, with expanded musical abilities now become members of one band again. Together with Pat and his crushing and experimental guitar lines, they amalgamate their musical influences to culminate their quest for the meaning of existence through their original music.

A set of four that shriek out their style of ear-splintering aggressive sound, Failure is constantly pushing the envelope of writing songs that deal with sentiment, despondency, solitude, and pain. The band is currently playing gigs around the Bay City Area and near-by zone.

2. Why did you pick this name to title your band?

FAILURE because we consider the society a scrap of the higher class. That world that we know is a Failure due to the restriction of freewill and freedom. We intend to have a patriotic voice for a change.

3. Your home is obviously not one of the richest industry nations. How did this fact affect your music?

Philippines is not a rich country, poor people constitute more than half of the population. It somehow affects the way we face our everyday lives but it is never a constraint on how we want our music to be heard. Although there are times that we would cancel our music practice or gigs because of money problem, we still strive and work our ass off to be heard by the people. Like our first album, damn it was a product of hard work and brotherhood. The recording studio did the mix mastering for free. Our brothers in the scene and our independent label help us to make our EP possible. And during gigs, none in our band owns an instrument, we have to borrow from other bands because we cant even afford to rent. BROTHERHOOD surpasses the fucking POVERTY here in our country. So tons of gratitude goes out to our brothers in the scene, FAILURE would be a total failure without all of you.

4. What do you do besides playing music?

We were all students when Failure was formed more than a year ago. So for those times, if we are not in practices, gigs or hanging out, then we are in school. But some things have changed now although we still practice and go to gigs. Unlike before, we dont see each other often now as we are busy in different things. Our vocalist Sam is engaged in school works; he is a freaking fine arts student and will be graduating in March but he still manages to write songs. Our guitarist Pat had stopped schooling due to family issues. Then our drummer John who is mentally incapacitated (hahaha!) stopped studying also because of financial problem. He even sold his cell phone and shoes to raise money. And I (Francis) the bassist, well I am a degree holder but dont have a work. As of now, Im busy with our split. Im looking for stores who would buy or consign the CDs.

5. Have you ever played a show elsewhere, but at your location?

Yeah we had played in other areas outside our province. If we have been invited to play, then we would try our best to earn the money for transportation and food. Sometimes our crew would go with us which is much better not only because the more the merrier but we will spend less money since more people would be paying the cost of the transportation.

6. Hows the music scene in your area?

6. The music scene here is awesome although shows here are not often since it is expensive to organize a show. Organizers have to pay for the venue and instruments thats why it would be planned if someone would celebrate a birthday, band would release an album or a benefit gig. Bands from other country also visit our country sometimes and would put-up a show. But it doesnt mean that crew would only see each other during gigs. We hang-out a lot and support each others music and thats what makes our scene stand.

7. What are the most important musical influences on your group?

Our music doesnt have a distinct influence since we make it very experimental. Every member adds flavour to the sounds.

8. If you had the choice, who would you pick for a common gig?

As of now, we want to see and hear other bands that are included in the 4 way split. It would be awesome if Failure will share the stage with them.

9. What are your plans and wishes for the future?

We just want our music to be heard by more people not only in our country but around the world. But to date, we only have five recorded songs and we have more music to share so we are looking forward to hit the studio by early next year. But again, budget would be the main thing so people please help us! Owning our instruments would also be damn great.

10. How did you make your way to FEAR THE ELEMENTS?

Sebastian of L2I sent me an e-mail for a review of our EP Death is Just the Beginning. Of course, we were happy that someone from another part of the world showed an interest to our music. Sebastian became a good friend of our band and he mentioned that they will be doing a 4 way split with other bands. That time, the array for the split is completed and we are looking forward to have a copy of the CD. Then later on Matthias informed us that there was a change in the line-up and he was asking if Failure can be the 4th band since Sebastian referred us to him. Damn I dont know how to react; it never cross our minds that we would be sharing an album with great bands like End is Forever, John Doe, and Loyal to the Grave. Now the CDs are in our hands and we are more than happy. I have friends who are big fan of those bands; damn they were thinking that we are just making stories until I showed them the proof. Haha! Thanks to our VKR family and to Sebastian for helping us. We owe them a lot.