Interview mit I Am Ghost

24.10.2006
First, give me a short Introduction! Who is answering the questions and who else is I Am Ghost? 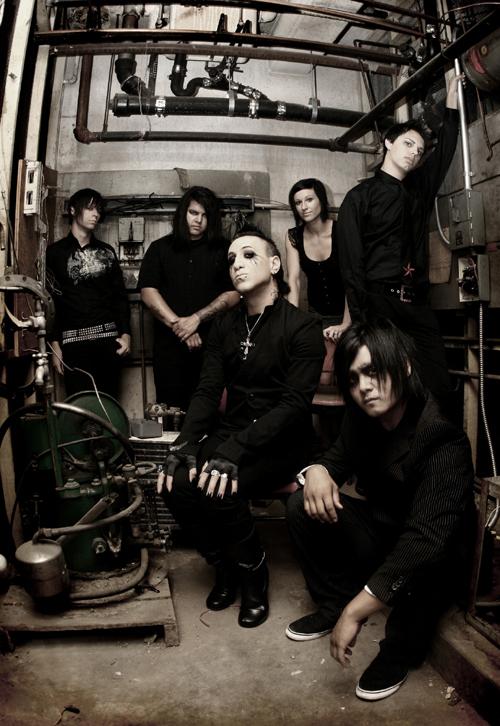 This is Kerith, the violinist/vocalist. Steve is our lead vocalist/screamer, Ryan is our drummer, Brian plays bass and keys and bgv's, Tim plays lead guitar, and Gabe is our rhythm guitarist.

Is it true that your band came together through MySpace?

Yep. Steve started a band page and found the members by posting bulletins. You became one

of the 100 "You need to know"-Bands in the Alternative Press! How do you feel about that?

We feel really honoured to be in AP, let alone be picked for one of their top 100 bands to watch. It also puts on the pressure to live up to their expectations, so it makes us continue to work hard for the fans.

Well, the writing process took 7 months, but we were only in the recording studio for about a month, so it wasn't that bad! During the recording time, we were at a beach house/recording studio, so it was cool being able to live where we were making the music. We could see out onto the beach when we were tracking our parts, and when we had time off we had the beach pretty much all to ourselves. We worked 12-14 hour days with no days off, so that was brutal. And our sleep schedules were all messed up...but we think we ended up with a fantastic record, so it was all worth it!

Tell me about your Lyrics! What are they about? Who is responsible for them? Are you all involved in the process of writing?

Our lyrics are very metaphorical, and they're all about a love story. A guy who is a vampire has fallen in love with a girl who has died and has gone to heaven. The album tells of his quest to get her back...you'll have to listen to the album for the rest of the story :)

You seem to like vampire movies. Which movie did inspire you especially?

"The Lost Boys" is Steve's biggest inspiration as far as vampire movies go.

What do you think about comparisons with bands like AFI and My Chemical Romance?

I think they're somewhat accurate, especially in terms of our image and the aggressive nature of our music. But I think there are several musical differences, including a lot of interwoven choral and orchestral parts in our music.

How did you get the idea to work with a female voice and a violin?

Basically I tagged along with Brian, our bassist, to the audition, and everyone thought it would be cool to have violin & female vocals in the band. It adds new elements and sets us apart from a lot of bands out there.

What are your main influences? Musically and lyrically!

Our musical influences range from Manowar to Mozart, also including Thrice, AFI, My Chemical Romance, HIM, Danny Elfman, and Avenged Sevenfold. Lyrically, our influences are Tim Burton movies, vampire movies, and any haunting love stories we come across.

How is the work with Epitaph?

Epitaph is a great label. We can really tell they believe in us and are patient enough to let us grow as people and as musicians. It's like a big family!

How has the Warped Tour been for you? How did it feel to be part of this tour?

We were so glad to get a few dates on Warped Tour, especially since we were already on the East Coast for recording; that made our roadtrip out there even more worthwhile. It was awesome getting to meet other bands and network with them. Plus, we learned A LOT about touring and about how we relate as a band. It was a really good experience for us, despite the bad weather and long hours, so we were thankful to be included in this year's roster.

How important is it for you guys to represent the kind of music you play with your outer appearance at a Live-shows?

We are all about the live show! We dress up to fit the image of the music way more than a lot of other bands out there. If kids are paying money and getting excited to see a show, we want to give them a show, not just a love reproduction of the album.

When can we expect a tour through Europe and especially Germany?

We are submitting for all sorts of tours, both nationwide and international, for 2007. We would LOVE to come to Germany soon, so hopefully someone will take us out!

Thank you so much for doing this interview with us! Readers who already have our album can attest to how "epic" it is, and we are really proud of it (not in an arrogant way, though). We just want to encourage readers to go out and buy the album because we truly believe that it is something amazing and different that will not disappoint. Thanks!