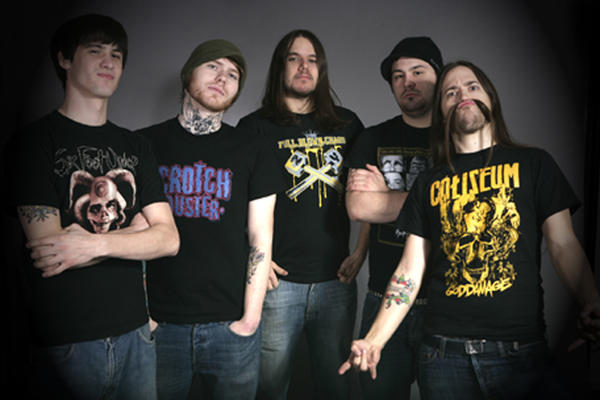 Please tell me something about how you as a band got together?
Well we were all just kids when we started this 8 years ago so we did it for fun. Now 8 years later?well?we do it for fun, on a much larger level.

Gary: How much pressure did you yourself put on the production of the second album after your successful debut The Ground Is Rushing Up To Meet Us? A ton. We wanted a tighter sound and we wanted to add a lot heavier riffs. We also wanted it to be fast as hell!! Our main task was structure though. We wanted better written songs and more memorable sing alongs above all. It was tough but I think we pulled it off. No?

How strenuous was song writing for the new album with you being on tour practically the whole time?

It was ok. We had a chance to write the record, then take it on tour and weed out what we didnt like, a bunch of times. 3 revisions and a year later we recorded ?life in ruin?

Writing we just write what we love and what we want to play every night for years on tour. I dont know what we expect but we hope people go ape shit for it and eat it up like laffy taffy,in Europe and US.

How was it to work with Jason Suecof?

Insane! Hes an amazing producer and an unbelievable musician but hes a crazy motherfucker for sure. He helped bring out all sorts of cool things that we would never have thought of.

Do you still have a life outside of music?

I have my girl and my dog and I am a state certified social worker. I love a million other things outside of the band and playing music. Bowling being a huge one! haha

Was it strange suddenly being on tour with all the ?big bands? such as Unearth, Zao or As I Lay Dying?

Nah. They treated us like equals and all became very close friends of ours. We play shows the same if there are 30 or 3000 people there so it doesnt too much a difference. We like the 3000 people shows though.

Do you have any funny tour stories you would want to share?

Well an unfunny story is the amount of farts that come out the ass holes of my band members. It seems unreal that those smells could take over a van so unmercifully.

Some of it is worthwhile and most of it isnt. there are some amazing bands on each side of the ocean but the knockoff bands that just try to pose as closely as other bands are so lame they shouldnt be around. Ya know? You can tell who gives a shit and who doesnt I think

Please tell me something about the Hellfest gigs you played and the experiences you had there with the crowd, other bands and the festival atmosphere.

Festivals are sweet as hell. Commanding thousands of people to destroy each other is amazing. Its weird because they dont really know each other but for some reason its ok to hit them and go insane? I LOVE IT!

What are your plans for the future?

To play these songs til my fingers fall off and to have 300 babies running
around my bus when we headline Ozzfest. Well?. maybe next year! Rock on and rock out!