08.06.2006
It has been six years since you released "A Place Called Home". What have you been doing since then?

Two and a half years touring on the last album, then one year off, six months making demos and finding a new label, then one year writing and touring on the new material(new places like Brazil and Australia and of course Europe festivals in the summer '04), then one year of; pre-production, re-writing, three months recording the album with Cameron Webb, creating cd artwork and finally three months of set-up time for the label to properly market the cd worldwide. Yes.that takes us from June 2000 to May 2006 in one paragraph. Time goes fast!!!

There has been a lot of coming and going in the hc scene and especially some big reunions with hardcore becoming more and more popular again. What is your opinion on this topic?

I think it is fine. Sometimes it is sad when a band gets back together and tours and nobody cares. 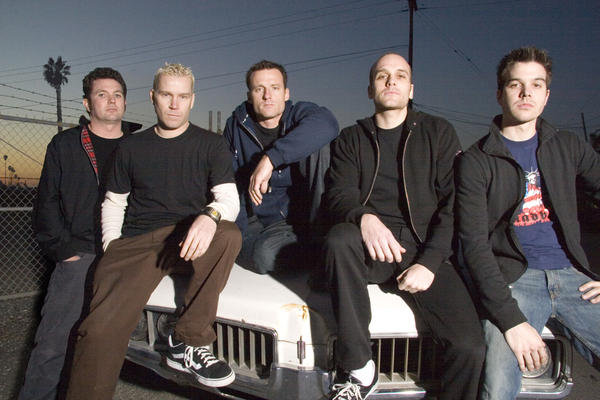 The modern hardcore scene is so big right now with lots of Influences from Metal, Goth and almost every other Genre. On the other side, there are also a lot of new bands doing strictly the oldschool thing, who are trying to stick to the roots. Where is all this heading and what do you think about this huge metalcore boom?

Hardcore has changed a lot in 12 years. Hardcore is bigger than it has ever been, by a long ways. I think all branches of hardcore are great for the scene and help it grow. The modern hardcore scene is so big now, with all of the bands who have crossed over with metal, goth, screamo, horror, etc. I think Ignite is sitting in a place balanced with punk, hardcore and rock. Luckily, I think that we are one of the few bands who could comfortably tour with Pennywise, Hatebreed, AFI, Bleeding Through or even a rock band like the Foo Fighters and fit in 100% with the tour. I think having a singer with an incredible voice gives us a lot of room to fit into any hardcore, punk or rock n roll scenes.

Let's talk about your new album, "Our Darkest Days". With Zoli on the mic you have the characteristic and memorable factor. Despite that "Our Darkest Days" is definitely the most melodic record of IGNITE so far, with the band sticking to its trademarks. What do you think?

We really wanted to make an album that hit hard from the beginning to the end, but at the same time we wanted a cd that reached farther melodically than anything that we had ever done before. We are very critical of our own writing and we throw away a lot of material that we do not think is good enough to put on a cd. I think sometimes we throw away some stuff that we should have kept. Songwriting is strange, sometimes you listen back to practice tapes and wonder why you did not finish a certain song. The best thing about recording this cd was definitely working with Cameron Webb. We had never really worked with a producer who was so involved from the beginning. We also have never worked with anybody who had that much passion about making a great cd.

How long did you write on your new songs and when did you decide to record a new album?

"Our Darkest Days" is a very political album. With which problem do you deal with?

We are involved with many organizations but the ones that we are pushing hard right now are Doctors Without Borders www.msf.ca and Habitat For Humanity www.habitat.org . Our long standing organizations that we have been supporting for over a decade include Sea Shepherds, Project Blue Sea, Earth First, Pacific Wildlife Foundation.

What about "Sunday Bloody Sunday"? We already had this U2 cover song on "A Place Called Home". I think you re-recorded it. Why that?

Because it was only released in Europe and all of our fans from other countries around the world wanted to hear it on cd as well. We got so many emails from Ignite fans who wanted us to record it for the new cd that we did.

We have wanted to work with Century Media for 10 years now and finally the opportunity presented itself.

What about the ZOLIBAND respectively A PLACE CALLED HOME and CALIFORNIA UNITED? Are the put on hold?

They are both finished now. We are focusing 100% ON Ignite only now.

What do you think about the European hardcore scene?

The European hardcore scene has made it possible for Ignite to exist as a band. Without Europe Ignite most likely would have been finished years ago.

You're coming on tour in July with WITH HONOR. What do you expect from this year's visit?

It should be a great tour. The new Ignite cd will be released for a month before we come on tour, so most of our fans should have the opportunity to buy or hear "Our Darkest Days"