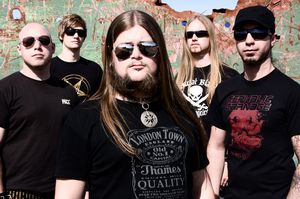 I want to congratulate you on another great album, "Death Domination"!

Mikke: Thank you! We are very happy with it and weve received tons of good feedback so we are indeed very pleased. We strongly believe it the best album weve ever made and so far everyone agrees.


Your last album "Holy Murder Masquerade" had a great idea by incorporating the lyrics with a visual story for the reader to see. Which concept is behind "Death Domination"?

Mikke: Yeah, Holy Murder Masquerade was very special. However, this time around we decided on not doing a concept album and just keep it simple. We ended up having a lot of lyrics dealing with religion and its followers, but it never was our intention to make this a concept album in any way. We just wanted to make the most brutal, aggressive and best possible album we could. Holy Murder Masquerade was quite slow and melodic, and after the release of that album we felt that we didnt really feel comfortable with how our sound had become. So when we started to talk about our new album we all found common ground in the need to start playing fast and brutal again. And I really think we accomplished that. Death Domination is our fastest and brutal album yet for sure.


I read a review where it said that "Death Domination" is not very original. What would you say?

Mikke: I say fuck it. Even though Ive never heard a band sound exactly like us we havent tried being original one bit on Death Domination. Its not what this album is about. We wanted to make the most pissed off album that we could. And we wanted to make the most honest album we absolutely could. And this is as honest as it can get. Death Domination is THE Impious album. If there are bands playing the same kind of stuff - fuck it. Weve always been like that. On Holy Murder Masquerade we were original by making the lyrics and booklet into a cartoon, but weve never tried to deliberately sound different. We are only about playing the music we love. And weve got tons of fans to prove that were not a shitty band.


When comparing to past efforts, in my opinion "Death Domination" is a sequel of your best album "Hellucinate".

Mikke: I totally agree. Death Domination is much more of a runner up to Hellucinate than Holy Murder Masquerade were. Its very much the next step from that album. Its faster and more brutal but still keeps the thrashy vibe and catchy hooks.


How did the contribution from Johan Lindstrand (ONE MAN ARMY AND.../exTHE CROWN) for vocals on the track "The Demand" come about?

Mikke: Johan is an awesome singer. And weve known him for years. Weve always had a close relationship. So when we were recording Death Domination we were talking about bringing in a few guests, as we always do. Johan has always been on our minds but in one way or another, things havent worked out. But this time it felt absolutely right, and Johan was up for it so we did it. Valle had some pretty good ideas to where he wanted Johan to sing so he came to the studio and hung out for a day while he did the vocals. It turned out great and being the great guy that he is, he even wrote a statement about his contribution and the album for our website.


Where do you draw your inspiration from when you write the lyrics?

Mikke: Valle who has written most of the lyrics in the past I know draws a lot of inspiration from movies, literature and society. We used to have very fictional lyrics and the lyrics have always come in second hand to us. But we wanted to change that on Death Domination so we took the lyrics a lot more serious this time. Martin who has never written a lot of lyrics before stepped up and co-wrote almost about every song with Valle. And I really notice a difference since before. The lyrics are without a doubt way better, and I definitely can relate to a lot of the stuff that is being told. Because I believe lyrics are supposed to tell you something, and this is actually the first time I believe we have accomplished that.


Whats next for IMPIOUS?

First off is the release of the album. Then I definitely hope we will get back on the road again. It was too long ago and I really miss playing our music to our fans. We are really excited about doing shows with the new material and we hope to be able to go to a lot of new places which we havent done before. Also we are recording a video for I Am The King in three days, and then there are plans to do a second video for Dead Awakening in two weeks. About everything is set. I think it will be really cool. And then I hope to do some summer festivals in a couple of months.


Have you any final words for ALLSCHOOLS.de?!

Thank you ALLSCHOOLS for this interview! And if youve read this entire thing then thank you so much! Wed love it if you would take the time to check out our Myspace and tell us what you think! Were at

Thank you for your time and keep supporting the scene!