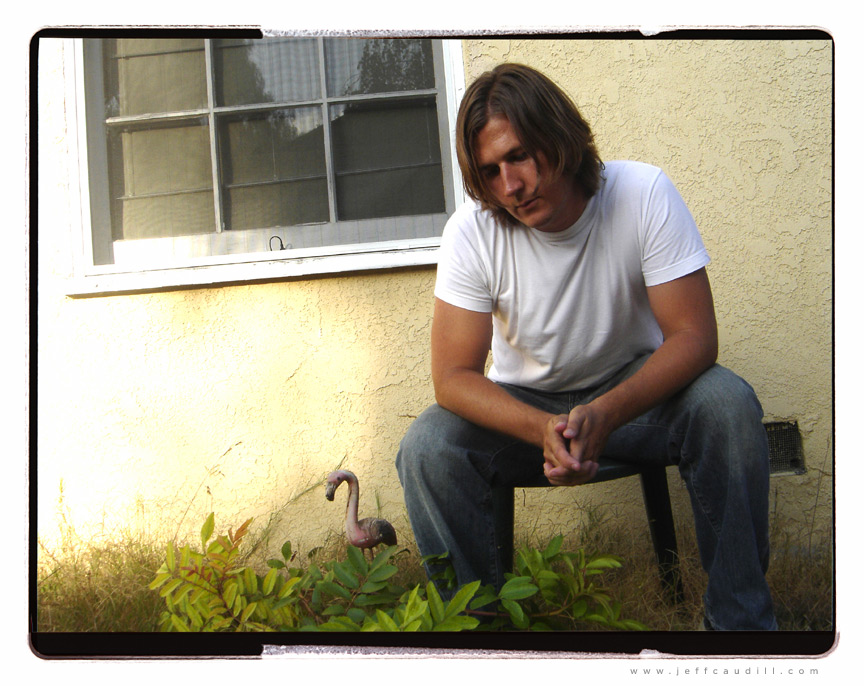 Hey Jeff, you just released your first solo album Heres What you Should Do, how do you feel about the album?

I am very pleased with it. Its a record I have been wanting to make for many years. It was great for me to break out of the same musical formulas that Gameface adhered to for many years.

Redfield Records is handling the release in Germany, how did you get in touch with the label?

They approached me about releasing it. I was skeptical at first because of their mostly hardcore image but after speaking to them I really felt comfortable with them. Their heart is in the right place and they seem to understand my view towards making music.

A few weeks later, we have the re-release of your short time project MARCH and the only album Turn. Tell us something about MARCH, how did you come up with this side project and why did it only last for such a short time?

The March story is a complicated one but I will give you the short version I had written a bunch of songs with my friend Michael Bains. It was during a time when all of my friends were in punk/hardcore bands and there was no real place for the type of music that March was, but it was something I really felt strongly about doing. Dennis Remsing (drummer of Outspoken/owner of Conversion and Network Sound Records) really liked the idea and offered to play drums, and ultimately release the album. So we got the band together, recorded an album, and played a few shows. Some of the members of Gameface didnt like the idea of me doing another band. They wanted me to focus my energy more towards Gameface. We were starting to do a lot of touring. It was the same year that we released Three To get Ready and being in tow bands and dealing with sensitive egos got to be too much to deal with. So March just became a one album wonder. Looking back, it was a little sad that I gave it up because Turn is still one of my proudest musical accomplishments.

I think there are a lot of similarities between MARCH and your solo debut. Did your vision as a song writer change a lot in the last 10 years?

I agree. I think this is the sound I have always wanted to have. I write songs the same way I always did, I just have a lot less restrictions now that I am doing it by and for myself. Its very liberating being able to use instruments and sounds that I would never have gotten away with while writing for Gameface.

I guess you are already bored of GAMEFACE questions, but even the promotion of your album is made with the name of your former band. What was the reaction of the GAMEFACE fans to the sound of Heres What you Should Do?

I understand why the promotion for the new album uses the Gameface name. It gives people a point of reference. Without knowing where I have come from I may look like just another dude with a guitar. Most Gameface fans have been very positive about the new album and have welcomed the subtle change of style. Were all growing up and moving on

Why exactly did you split up as an established band with a loyal fan base?

It wasnt my decision to make. We all got to a point where we wanted different things from the band and from life. We just werent meant to continue together anymore. It was sad but it was necessary. Looking back, I was a good thing. I was ready to move on creatively but just wasnt ready to admit it.

What did you do in the last two years? How did you get along, pay your rent?

I have a real job as a graphic designer. Ive never made a living on music but its never stopped me from pursuing it. Its not my career but its something as important as breathing for me.

Your solo project, as well as MARCH has this singer/songwriter charm between indierock, collegerock and country. I expect a really familiar atmosphere for your forthcoming tour. Arent you somehow thirsty for partying crowds and kids going crazy?

I think kids still like to party to acoustic indie country music :) This tour is going to be completely acoustic. Its something Ive always wanted to do. But I love to rock. You know that. And maybe next time I will bring a full band. The future is wide open.

Are you planning on starting anything in the vein of GAMEFACE, or are those times over?

To do another band like Gameface would be redundant. There was a Gameface. There doesnt need to be another one.

Where do you see yourself in five years from now musically?

I like the path Im on. Theres no point in speculating really. But one thing is for sure, there is much more music on the way.

Thanks so much for your interest in my music, past and present. And thanks for a nice interview. I hope to see you soon.
www.jeffcaudill.com