Allschools: Hi there, first of all, thank you very much for taking your time to answer us some questions. How are you?

Joe Cotela: I’m am good – we’ve been touring a lot, but I am now home in Phoenix, AZ.

Allschools: Since you only had two shows in Germany so far, Please introduce yourself and your band to our (mostly) german readers.

Joe Cotela: Hello everyone, I am Joe Cotela, the lead singer from the band Ded. The other members of the band are David Ludlow (Guitar); Kyle Koelsch (Bass) and Matt Reinhard (Drums)

Allschools: You released your first album “Mis•An•Thrope” last year. What kind of reactions did you get since the release?

Joe Cotela: The reception was beyond our expectations, truly great! We did a lot of huge festivals with bands like METALLICA and AVENGED SEVENFOLD and toured with some giant bands like KORN and STONE SOUR. We won a handful of awards and some accolades. We traveled the world and we couldn’t have asked for more from a debut album – we’re very grateful.

Allschools: There are so many heavy rock and metal bands out there. What makes DED special? Why should our readers listen to your music?

Joe Cotela: Because I’ll buy you pizza if you listen to our music. ;o)  We’re aggressive and what we express is honest – we’re really trying to make a connection with people.

Allschools: You played your first shows in Germany this year. The legendary With Full Force Festival and a club show in Hamburg. Tell us a little about those shows. Are there differences between shows in Europe and the United States?

Joe Cotela: Full Force was absolutely incredible. The festival was the most artist friendly fest that we played in Europe. They really made sure to take care of you above and beyond. The crowd was wild and I loved how diverse the line-up was. The show in Hamburg was killer as well! It was a small club but playing there for our first time and filling the room with passionate Ded fans made it hot, sticky and special. We love all kinds of settings for shows. To me, the shows in the US and Europe are pretty much the same. People enjoying music however they see fit.

Allschools: And what do you like better? Festival or club shows?

Joe Cotela: I like both for different reasons. I really just want an energetic, passionate communication with the audience. If we get that, then we have done our job and we feel good.

Allschools: You’re on tour again in September and October. Are there any plans for more shows in Germany in 2018 or 2019? If not, what do you have planned for the end of the year and 2019? Maybe you’re already working on new songs?

Joe Cotela: We are in the studio in Arizona right now working on demos. We do a month with BLESS THE FALL and THE WORLD ALIVE in September and then we are right back to writing and recording. We’ll have a new album for sure in 2019 - that is our main focus. Once the album is done, we’ll go back out on tour to support it - I’m sure we’ll be back to Europe and Germany next year.

Allschools: I’ve read that you said “There is an honesty and a ‘fuck you‘ about hard core music that I don't feel as often anymore." Can you explain this statement? Why do you think that’s the case?

Joe Cotela: I think I asked them to change this quote as I didn’t want to say “hardcore” I wanted to say “heavy music” in general. I also stated that more than 2 years ago and I do feel a change in the wind since then. But yes - we started Ded because as music fans ourselves we were feeling a bit underwhelmed with heavy music for a while. There are a lot of contrived hard rock bands, a lot of boy band type bands - looking cute and screaming about nothing, a lot of heavy metal with zero pop or song structure sensibilities… A lot of bands just going through the motions with no sense of danger or making any kind of statement. All of those things are fine if you like that type of music, I just personally don’t. So we wanted to start a band that spoke for us and the things we wanted to hear in a band.

Allschools: I’ve also read that your music is inspired by bands like KORN, SLIPKNOT or BRING ME THE HORIZON. Did you get the chance to meet those bands? Would it be a dream come true to tour with these bands in the future? Or did you already tour with one of those bands?

Joe Cotela: We toured with Korn and Corey from SLIPKNOT is in STONE SOUR who we also toured with. We would like to tour with SLIPKNOT though as well, yes. We‘d love to tour with BMTH as well as a slew of others. Our inspirations span across so many styles of bands from EVERY TIME I DIE to JOHN MAYER. And yes, if JOHN MAYER came calling we would tour with him!

Allschools: I hope to see you again in Hamburg pretty soon because I missed you last time. Thanks for your time! Any last words?

Joe Cotela: Thank You very much, we’ll see you all soon! Come connect with us on Social Media. 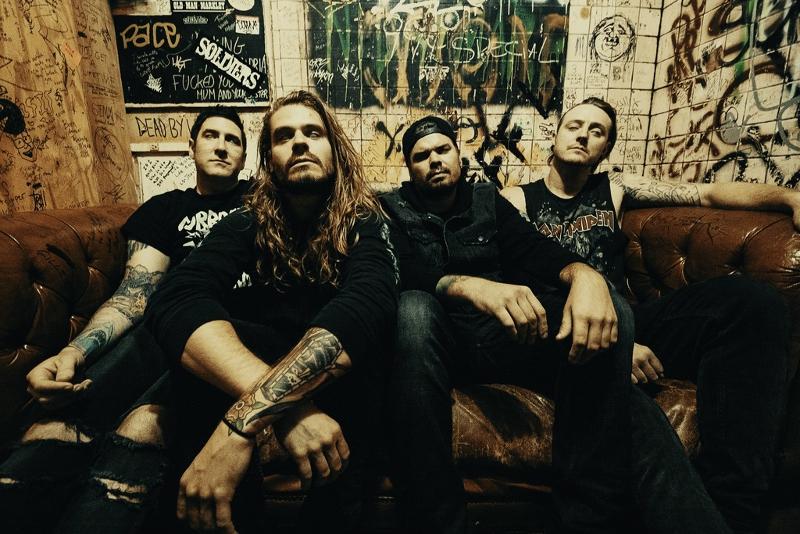