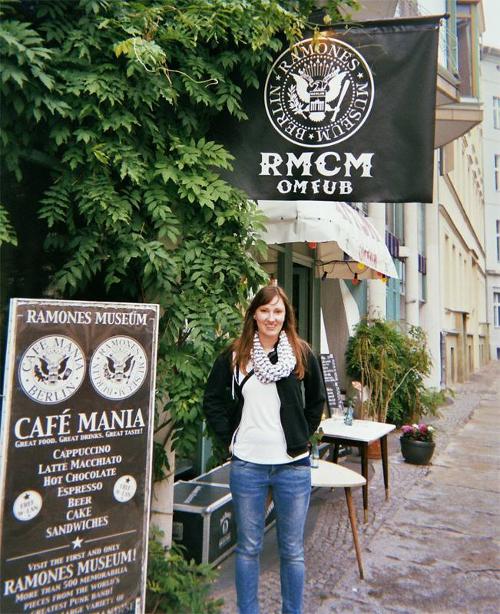 14.05.2012
Allschools:You just released your new record called „Weapons“, why did you choose that title? It sounds so dark.
Mike: Because it’s provocative.
You think so?
Mike: A little bit. We were just trying to think of cool titles and it kind of sounded cool (smiling).

You first recorded the songs and then decided on the title, right?
Mike: Yes, usually that’s always the way we’re doing it. First writing all the music and then come up with songs titles and then the overall album concept and title and all that business afterwards.

How did you start collecting ideas for this record? Did you collect them all together or everyone for themselves and then told eachother about it?
Lee: We’re in a pretty unique position as we’ve written so many songs over the past seven years since the third record and we had ideas from everywhere, we had like a box of 90 ideas to listen to and new stuff as well. It was fun to go through stuff that was like 7 or 8 years old.

And you still liked your old material?
Mike: Some of them, yeah. Some of them we listened to and we were like „why haven’t we used this one before?“ or maybe even if it was a song that we had scrapped but there was a good part in it or a good riff in it we were like „that’s too good to stay in the rubbish bin“.

You went to LA again to record the record, why do you like recording your records in the US and not in the UK?
Lee: Money.
Mike: Yeah, financially there are so many reasons, it’s just cheaper if you record in LA.
Lee: Name me a big rock producer from the UK.. there are none. It’s either indie or classic but the ones we were willing to work with are all based in America, that’s just a fact.

But wouldn’t it be cheaper to have the producer come to the UK instead of all you going over to the US?
Mike: No, studio time is very expensive in the UK. So it just works out cheaper in the US and four of us live in LA as well so we can save on the accomodation.

Why did you move away from the UK?
Mike: Because my wife’s American.

For your last record „The Betrayed“ you worked with producer John Feldmann but in the end produced it yourself, how did that come?
Mike: it didn’t turn out quite how we had imagined it to be or we wanted it to be. So we decided to scrap it and start again.

And would you say it was the right decision in the end?
Lee: Absolutely. The record is so angry because we did it ourselves in our own way and we captured exactly what we wanted to. John Feldmann wrapped it up in.. plastic (smiling).
Mike: You know the old saying: you want to have something done propely, do it yourself.

For „Weapons“ you worked with Ken Andrews, why did you choose not do produce it yourselves this time, since it worked out so well with „The Betrayed“?
Lee: Stu (Stuart Richardson, bass) didn’t want to do it again this time.
Mike: Yeah. I mean, we did it ourselves but it was basically really Stu who produced it and I think that caused way too much tension within the band with him producing it and trying to keep everybody happy and aside from that I think Stu wanted to concentrate on being a bass player and a songwriter rather than being a producer.

Which song on „Weapons“ did change the most from the first idea to the final version on the record?
Lee: Hmm.. I’m just mentally running through them.
Mike: "Heart On Loan" changed quite a bit.
Lee: Yeah, probably that one.
Mike: The vibe and the feel totally changed from when we first wrote it. From Lee’s original idea we kind of kept it the same but changed the whole feeling of the song.
Many of the new upcoming british bands like The Blackout or Young Guns mention you as their role model and inspiration. So who did you look up to in the early years of your career?
Mike: Metallica was a massive influence for me.
Lee: Any of the big metal bands.
Mike: When I was like 13 or 14 when I started playing guitar it was all Metallica and Anthrax and Slayer. All those bands.. and even though we don’t sound like those bands, that’s what got us into music and then you discover other bands and go backwards and find out all of their favourite bands and influences. I mean we still get influenced by other bands.

Which is your favourite band at the moment?
Mike: Uhm.. don’t know.
Lee: I don’t have one.
Mike: My favourite album recently ist he new Bombay Bicycle Album („A Different Kind Of Fix“). It’s really good!

Your went from playing the smallest clubs to playing the Wembley Arena – when was the moment you thought „yeah, we really made it“ for the first time?
Mike: We still don’t really think we made it, but the first moment at least for me that I felt we stepped up to being more than just a local band was when we played Reading Festival in 2001 and it was insane. We played the small tent and not enough people could get in the tent, it was like packed! So that was the first moment we were like „we are doing something cool here“.

If you would have to describe your new record to someone who has never heard of the Lostprophets before, what would you tell him?
Mike: Listen to it.

Alright, good answer (laughing).
Mike: You can’t describe our music and I don’t want to describe my own music. Just listen to it and take from it what you want rather than describing it and putting preconcieved ideas into someones head.

Do you have something like a main goal you want to achieve in life?
Mike: To always just work for myself. And do my own thing rather than working for somebody else. And always be creative.

Lee, same with you?
Lee: No, I want to own a Ferrari Enzo in black before I die (laughing). I’ll take it to my grave.
Mike: (laughing) you will get buried it it! Just save up your entire life and when you die you’ll look fucking great, we will just push you in the car.

Alright guys, thank you very much for taking the time!
Lee&Mike: Thank you!