14.09.2006
Can you please tell me something about the band history: how did
you all got together?

We started as a side project to a who's who of Cleveland metal bands: 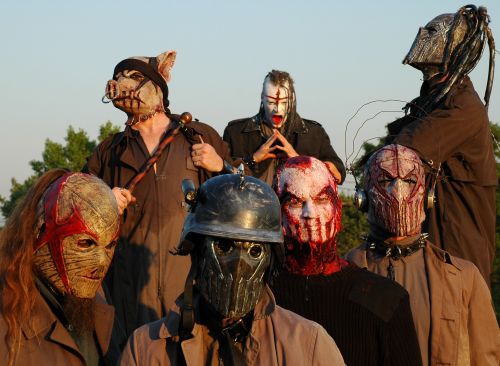 Hatrix, Unified Culture, Mystik and we wanted people to walk in the shows with an open mind not expecting more of the same. From day one before a single note was written or played, Skinny and I knew what we wanted to do. That was to push the envelope as far as we could. Visually and musically and write and play whatever we wanted to... the people who would join us on this journey would change, but with the core members: Skinny, Shmotz and I, as well as Mainstay bassist Pig Benis (Mr. Murdernickles' younger brother) and Gravy (Skinnys' older Brother "all in the family"). As well as samplerboy Stitch and new second vocalist Waylon(from Wilkes,NC the only member not from Cleveland,Ohio). Mushroomhead journeys on with "Savior Sorrow" on Megaforce Records on the September 19th in North America, October 6th in Germany. 13 Years and still going strong.

Has it always been your dream being successful musicians? How did
it feel to be # 40 in the US Billboard Charts?

Yeah, I would probably speak for all of us but as far back as I can remember this is what I wanted to do. I can seriously remember singing in the mirror as a 6 yr old kid... We've been in bands together for years we know each other pretty well and still believe the sky is the limit... Number 40 on the charts was bad ass but I see more for this record and only time will tell really... success is always measured by where you chart but some bands do more on tour and we've been lucky there so far. I think we Just need to visit more of the world and we'll see where we sit after that.

Where would you see your biggest musical influences?

I found a Grand Funk tape sitting on the side of the road at a very young age. It worked and I played it til it didn't anymore -- that was big. The Stones, Beatles, Priest, Maiden, John Bush while with Armored Saint, The Cult and then Faith No More/Mr. Bungle... I've been formed by a lot of great stuff along the way, That and just singing everything I've ever heard on the radio Country music aside. The band is from diverse musical backgrounds as a whole as well which I believe is most important... If you're all from the same mold, I expect you'd be quick to grow mold.

Do you see a difference in the music scene in Europe and in the US? How do you think will European kids like your music, or what type of kids will like your music? 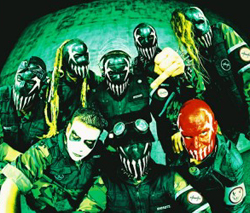 We played "Gods of Metal" in Milan, Italy a few years back admits the biggest names in metal over the last 20 years or so. Names Like Sodom. Kreator, Halford And Slayer... I'd never seen that version of "Fuck You" in person before, you know, the full arm way... But I saw plenty of examples of it that day. Along with small groups of Moshers. European Kids seem to hold onto the classic bands and styles longer. which to me is amazing and what I would hope for. We aren't trying to replace anyone in anyway... we grew up on the same bands. We've been in the same crowds... We're just trying to show the world what that planted in us on our way here. I think that this record has something for any taste in music today,more so than any of our past recordings. I believe if you look you'll find something that moves you, peacefully or violently... I hope we get a chance to come and show you up close and personal.

What is your message behind the music and the lyrics? Or is music and lyrics just a means to express yourself without trying to influence others?

Musically I think the message is play whatever moves you. On XIII we were trying to make radio songs at the labels request, which is fine but it took away some of what is Mushroomhead. We have had Our structure before not intentional standard forms but what we have always done. "Solitaire Unraveling" off "XX" was old school MRH, whereas "Sun Doesn't Rise" off "XIII" was more created with an outside producer. I love both songs but there's nothing lost in the DIY of "Solitaire..." as compared to the tight structure of SDR. So with our newly refound creative freedom I think we pushed the Music to much further extremes and we are more us again. As far as Lyrics it's cool to let People feel out what they take from the songs, but this Album is more about the world coming apart at the seems and peace becoming a sick joke and caring for one another a fiasco. An Emotional Civil War... with the hopes that we get it together as a world community before it leaves the mind and takes form.

How does song-writing work in the band?

It's usually lately been a jam session between Gravy and Skinny(and sometimes Pig Benis) and afterwards Skinny will dissect the parts on ProTools and build a working skeleton. Then, we'll all rewrite these parts and record our ideas in our studio (Filthy Hands studios in Cleveland which is also our rehearsal/video studios)and this encompasses pre-production as well. After that everything is re-recorded and then we start to get some keepers, Much of which is found on the new release this record was fun for me because waylon and I worked together on vocals a lot the other releases were more. Separate ideas done separately which brought about some of the angst, which was cool too. But I like this process, much more rewarding in the end.

How would you describe your life show? What can European crowds expect?

We have tried to build on what we had a few years back when we were last over there. We try to put on a real show, high energy and multi-elemented. We want the crowd to leave with the songs and the sights burning in their memory.

How was working on your full-length "Savior Sorrow"?

It was great. It's our first full-length for Megaforce but not our first period. But it was fun to have complete control again for the most part. It's kind of rare to do your whole cd in house and have suggestions not total control from your label, but this is where we belong and it shows. "Savior Sorrow" feels like a true Mushroomhead record in every sense of the word. It is our finest hour to date we all believe and hopefully it will be received the same way.

How did you feel when everything was finished? 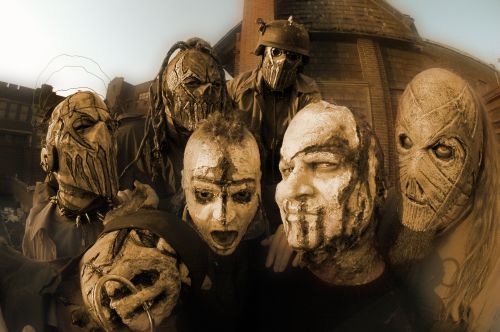 Fantastic, I think it goes to extremes in every possible direction. I think the original vision Skinny and I saw for the band is best realized here. It has all of the elements present. You want to be pumped to rise in the pit?...well, it's there. Feeling down? It shows you aren't alone and believe me I know. Songs of hope in a world going horribly wrong... and questions for the leaders who've failed us all way too long ago.

How did you get a label and the possibility to make the record?

Working hard gets noticed on what ever level and whatever walk of life... The misconception by a lot of aspiring people is once you get "the deal", it's smooth sailing. No, that's when the real work starts... If you wanna stay or succeed you have numbers to meet and you best exceeded them. Mushroomhead has succeeded as an independent. But Universal brought higher expectations and a weird commercial vibe, so we left Universal. Megaforce is much more a pioneering label who wants to work with artists who are different and original. If you work hard, someone will find you...bottom line.

What will the future hold for Mushroomhead?

Volume II /the complete second season DVD, European tour 3 and then some. Japan and Australia... Some arena tours as main support or opening... Then start on the follow up to "Savior Sorrow" for Megaforce. Growing like a Fungus.
Peace