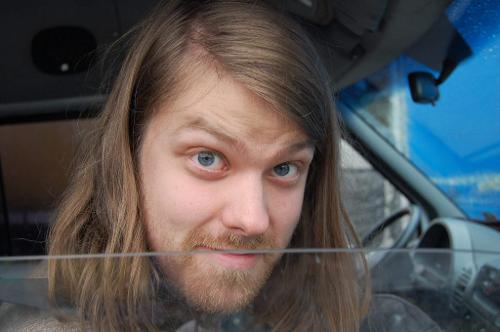 Im Josse, I play the base in RAISED FIST


You have been on tour since a week now, especially in Germany. How would you describe the Veil of Ignorance tour if you compare it to previous tours you did through Europe (like the Sound of the Republic tour 2007)?

There are more people coming out to the shows and we have better support acts. We sold out almost every show and that feels just perfect.


Is Germany a good place to play shows?

Yeah, definitely. But Austria was also sold out too. Milan was sold out. Switzerland was not sold out but it was a huge venue to play, so it worked out fine. Everything was like a step forward compared to the last tour.


Last year your only show in Germany was on Riez Open Air. How did you like it? Do you prefer playing festivals or small venues?

That was a more punky festival. It was very small, so it was fun to us. If you wanna grow as a band, a festival is always the better place. You reach thousands of people. On the other hand, when we are playing smaller shows, we know that people are only there for RAISED FIST. I personally dont like the tall stages. Its more fun to play shows without a barrier, but if its like 1500 people in front of you, you definitely need it, otherwise its gonna be pretty wild.


Sweden is your homeland. What can you say about hardcore in Sweden? Is there a growing scene with many shows and does the country have talented newcomer bands?

Not too many shows I think. Ten years ago it was different. There are less shows nowadays. I think there are bands coming up all the time, following trends and new genres and all that stuff. Not only in Sweden. Music is developing all the time, so theres nothing strange about that. We also grew from oldschool hardcore to modern hardcore. Fifteen years ago, there were more shows. But these were small shows with about 150 kids attending.


Im a fan of ENDSTAND and LIGHTHOUSE PROJECT. Which swedish or scandinavian bands would you recommend to anyone?


There are many different opinions concerning DEEZ NUTS in the hardcore scene. What do you think about your support band?

I think theyre good. Actually I think the music is good and thats what counts. I usually dont care that much about lyrics. I mean if youre a fucking nazi I wont listen to your music, but I think DEEZ NUTS is a nice band. They are good guys, humble. We became good friends from the first day of the tour.

Lyrics arent that important if it sounds good and the people arent assholes.


Your lyrics have always been very personal. What do you think about general topics in hardcore music such as the straight edge lifestyle?

No one lives straight edge in our band. We dont even think about it. Its a lifestyle, if you like it its up to you. I hope everyone in the whole world lives his own lifestyle without even caring about what other people think. Just like we do. Its perfectly fine for me to be what you are. If youre gay, youre gay, if youre not, youre not. I dont care too much about that.


What about vegetarism and veganism?

Its the same answer.
If youre angry about the keeping of animals and so on you should do it, but its nothing for me/us.


In the older days, unity in the scene was a huge issue. Nowadays, the scene is very divided. Long existing bands (i.e. H2O) complain about the fact that the fan base is only interested in their clothes and hair. Your view?

I think nowadays its a lot more with image, hairstyle, makeup and shit like that. Music is music. I dont fucking care. Im doing this for the music, I dont care how anyone looks like. I just hope that people like our music.

You can probably see more honesty with a guy who doesnt care how he looks and knows every fucking lyric. And I think its more like Oh theres a show and Im gonna be there, everyone has to notice me stuff with some guys. Theyre mostly not really into the music. If you like the bands, the music and the environment, just go to the shows as you want it.


Do you think violent dancing is a part of hardcore music? Is violence a growing problem?

I think its kind of fucked up, I dont know why they do it. Its better when you have a packed show like today, so that the people cant even mosh around. There is not enough space for that and they just jump around and stuff. When the people go crazy about the music they should care about each other. I hope people are there for the music and not for fucking each other up. If people wanna do it, theres always a place for them where they can do it, where they have enough space, but they shouldnt fuck other visitors up.


Lets talk about your newest output. The album is called Veil of Ignorance. Is this a kind of statement towards or about anyone? What is the idea behind it?

Its a theory of a guy named John Rawls. Its about finding the perfect society. It works like: if you put yourself anywhere in the world, in whatever social surrounding (it doesnt matter if youre cleaner or a doctor) you should be satisfied with dropping yourself anywhere. You dont where you will land, but you should be happy with that (as happy as anyone else). You should google it to find out about it.


There are lots of quiet passages, for example in Wounds or My Last Day. These songs sound very thoughtful and (in my opinion) they are very opposing to your older work. How did this evolve?

Its just a normal evolving. You just go into a special direction. We never planed in which direction were gonna go. If you have got ideas and it works, thats good and you should just go ahead and record it. Were just trying to make the best music we can without planning it. We dont know when to record the next album or what its gonna sound like or anything. We dont even know if there is gonna be a next one. The future has to tell.


What is the better strategy in modern music industry: To change the bands sound and develop with every album or to push a specific sound through and through?

If you even think about the fans, youre fucked anyways. Years pass on and you grow older, a lot happens. You should just try to do good music. If it comes from the heart its gonna work out anyway. I wouldnt even care if we have no fans because we should just do what we like ourselves. We do it for ourselves and not for anyone else.


Would you agree if I say that Dedication is and will always be your fastest and heaviest output?

Maybe, yeah. I think so. I agree. Until now. You dont know whats coming in the future. But the other releases are I think as hard, but in a different way. On the latest two releases for example: We have some kind of energy in both the lyrics and the vibe of songs. It will always be like hard music, even if it is a bit slower or more melodic.


RAISED FIST exists since 1993. My fullest respect to that. Honestly: Do you still enjoy playing shows and writing new songs? Does it still release the same good feelings?

Yeah definitely. Its perfectly the same. For the first seven years we didnt even tour. We played some single shows but we tried to keep it on a level as we think its fun. If it gets too much, where gonna be bored and its gonna feel like fucking work every day. When you do it two weeks, you dont wanna end the tour, but you have to. You have to load your batteries. It should never become routine so we are always doing short tours. I think we seem to enjoy it more and more with every year. I can tell you, the day it gets boring, Im not gonna do it anymore. I wanna see it more as a hobby than as a job


How long do you think RAISED FIST will keep going? What will you probably do once the band is done?

I have no idea. Hopefully, for a long time. As I already said, when the fun ends, we end.

Come see us live in Europe if were on your hometown. Or maybe next tour. Go see every band you can. If the music means something too you, then Im happy for you.