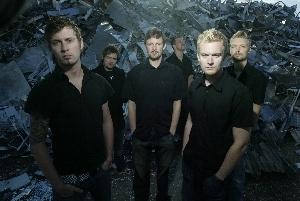 To start with, please give us a short introduction to RAUNCHY

Kasper: Yeah, of course. RAUNCHY is a kick ass metal band from Copenhagen, Denmark, who are sent from another world to destroy, erase, and improve the scene, hahaha Nah, were just living the dream of playing music and having fun with it. Check us out if youre metal music

You describe your music as "Futuristic Hybrid Metal". How would you define this music label?

Labelling music as futuristic hybrid metal is a way of marketing or catching the attention of kids, who dont know us yet. Personally people can label our music whatever they like, I really dont care. Actually I think it should just be the hybrid metal thing, because we use a lot of different genres in our music. The futuristic is more in order compared to our older releases like velvet noise. Some people have labelled us as metal core lately; I dont know where the hell that comes from, maybe its because we have signed to Lifeforce, who have discovered and released a lot of genre defining metal-core acts, but I wouldnt label us metal core at all Its a question of subjectivity, I guess, its cool, hehehe

Your last release, "Confusion Bay", has been released on Nuclear Blast, you also had a Re-Release of your debut "Velvet Noise" there. How and why did you part ways with Nuclear Blast?

NB fired our sorry ass, hahahaha they were rationalizing their whole structure, and we got caught in the process. Its cool all right, they werent being that supportive of the band, and we kinda felt like the outsiders all the time. We always had to fight for tour support, and thats a part of the game, we know that, but at the end of the day, we saw this as a cool opportunity for us to get a new label, which would understand and prioritise us, like its the case with the Lifeforce family.

And how did you team up with Lifeforce Records?

Right after we had finished the recordings, we started looking for a new home, and we received A LOT of offers, but we ended up with the decision to join forces with Lifeforce records. Its not the biggest label, but it is the perfect label for us right now. They are so dedicated to our music, they work for us constantly, and that really makes us work even harder. Their dedication is a motivation for us, and we have the same goals, which is really cool, you know Yeah, we couldnt be happier with our teamwork, hehe

Listening to your newest release, I recognized some parallels to IN FLAMES. What bands do influence you and your music?

Yeah, In Flames have definitely inspired us in a positive way. But we draw inspiration from a lot of old school bands as well as more contemporary bands, and of course from a lot of different genres, electronica, pop, death metal, rock, you name it, and the eclecticism is a really important factor in our signature sound. We are so lucky to have found our own sound, when you put on a RAUNCHY album; you know almost immediately recognizes that youre listening to a Raunchy record, Thats really cool, in my humble opinion, hehehe

Where do you see the differences between "Death Pop Romance" and your past releases. How would you describe the record to you fans and how to the ones that dont know RAUNCHY?

Compared to the other albums, Death Pop Romance has a more unified expression. I know, its cliché to say, but we have refined the melodic parts and stepped up on the brutality with the more, yeah, brutal parts Death Pop Romance is a faster record, and the ten songs are all catchy, melodic, brutal and very metal in every aspect of the word


What are the topics you deal with in your lyrics?

Actually a lot of the lyrics deal with aspects of loss. But theres also a lot of hope and vitality to be found in them also. When I write my lyrics, I draw inspiration from personal things I have experienced, but I put them in fictional contexts, just to make it a little more poetic, I guess, hehehehe

In what context does the album title, "Death Pop Romance", stand to your songs?

The album title works on two levels, one regarding our signature sound, and one, which has a close relation to the lyrics, the art work and the whole concept of the album.

Lets talk about the recording process of "Death Pop Romance". Did you enter the studio with complete songs or did you change, rearrange a lot?

Yeah, we had the arrangements in place before we entered the studio. But a song like remembrance was completely written in the studio. Its really important that there is space for creativity in the studio, thats the cool thing about writing music; you dont always know what youre going to come up with. A lot of the clean vocals were written in the studio, and a lot of the lyrics were also rearranged in the studio. Our producer and good friend Jacob Hansen really forced us to come up with the best of the best, both with the vocals but also with the arrangements. He questioned a lot of our ideas, made us consider the perspectives on certain parts and so on. He was really cool to work with, as always by the way

How do you see the Danish Metal Scene? Youve been the first Danish band being signed to Nuclear Blast though

The Danish metal scene is constantly growing, which is so cool. I believe that bands like Raunchy, Hatesphere, Mercenary and Mnemic have shown that it is possible to get the attention from the bigger international record companies, and get signed, and hopefully this positive outcome will continue as inspiration in the future.

We are going to tour a lot, and there are really good chances of a whole European tour coming up in a not so distant future. We have loads of offers in the works, both regarding festivals and supporting big bands. We cant wait to get out there on the road and support the new album, its gonna be awesome for sure!

Thanks for the support and for this interview. It was cool. Pick up the new album when it hits the stores. Its kills, hehe and come party with us when we hit the stages around Europe