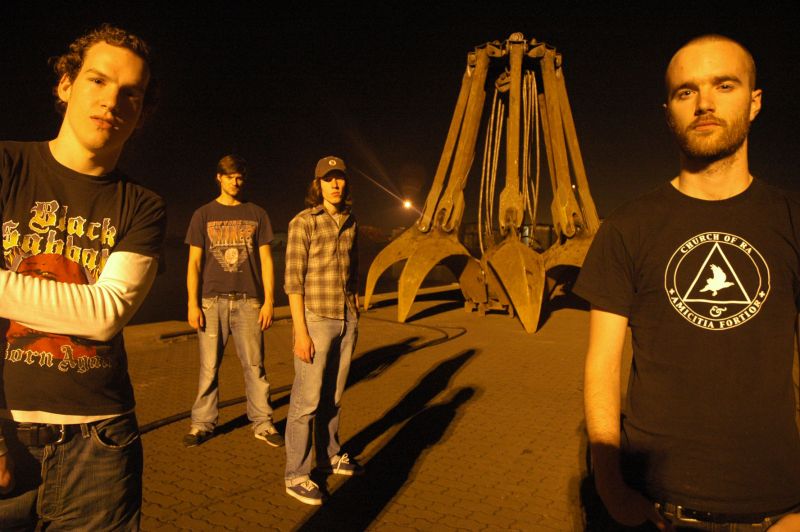 1. So first of all introduce the band and yourself.

Rise And Fall is a hardcore/punkmetal outfit from Ghent, Belgium. We just put out our second album called "Into Oblivion", on Reflections Records. JP drums, Vince is on bass, Cedric plays guitar and I sing. There's isn't all that much to be said about me. I'm a man of simple pleasures. I love eating, sleeping, touring, Black Sabbath and football.

2. How and when did Rise And Fall get started?

Initially, Rise And Fall started as a project between Vince, myself and our friends F-Double, AK and Murph. That was in the summer of 2002. We just jammed and wrote a few songs. We did a demo in 2003 and did our first tour in January of 2004. As the band got more serious, not everyone in the band was prepared to give Rise And Fall the time and attention it needed so we went through a couple of line up changes and recorded our first album, "Hellmouth", a couple of months after that. The line up back then was the same as it is now, except for our original drummer Murph.

3. You (Bjorn) have two fulltime jobs. How do you manage Rise And Fall and
Goodlife Recordings?

Well I don't look at Rise And Fall as a job. It doesn't earn me any money either haha. But all of us, except Cedric who still studies, have a full time job that we combine with the band. It's not always easy but with some flexibility from both sides you can get some things done.

4. When I listen to your new stuff like Into Oblivion or older ones from Hellmouth I hear a big influence from bands like Ringworm and Integrity. What does the Holy Terror mean to you?

Holy Terror to me was a bunch of bands in the early and mid 90's that brought a whole new sound and imagery into hardcore. Back then it was totally unheard of and groundbreaking to do what bands like Integrity were doing. We all grew up on listening to a lot of Holy Terror bands and bands that were influenced by that whole thing, like Congress and Lash Out for
example. Rise And Fall has always taken a huge influence from those bands, simply because that's we're into.

5. Are you satisfied with the final product of Into Oblivion?

Definitely. I think we managed to create the album we'd envisioned. Vincent Tetaert and Kurt Ballou did an awesome job and us the sound we wanted. Jake Bannon delivered the sick artwork we wanted him to so we are definitely still stoked on the record.

PUNKMETAL is our "fuck you" towards all the watered down, polished garbage people try to sell as being hardcore these days. It stands for independence, vision and attitude. Musically it reflects what we do well, since we try to combine the energy, anger and attitude of hardcore punk with the heaviness, darkness and rage of good metal.

7. The artwork of your old record was done by Dave Quiggle. How did this collaboration started?

We saw some of Dave's work and we were into it so we got in touch with him and he was down to do artwork so it was as simple as that.

8. What does Rise And Fall mean to you?

It's probaly one of the few things in my life I really care about. It's also the title of an amazing LEEWAY song... that's where we got our name.

9. In the Nineties the biggest belgium hardcorebands were Liar, Congress and Blindfold. Now it´s the time for The Setup or Rise And Fall. This must be unthinkable for you representing the Belgium hardcore scene in the world.

More than The Setup or us, I think DEAD STOP and JUSTICE really represent how great things are in Belgium these days. I love both bands and ever since they've been around I've seen some of the best shows in my life. I got into this in '95 when bands like Congress, Liar and Blindfold ruled the scene and things were really good back then too. I still love those bands and listen to their records too. Belgium nearly always had some good bands and a lot of
quality shows... but the last few years have been crazy. I'm glad we were able to be a part of this insurgence.

10. You contribute a song called Kingdom Of Heaven for the Integrity tribut. This must be an awesome business for the band.

Yeah it was cool recording a song by one of our favourite bands. Integrity has always been a huge influence on us so we really did our very best to do the song justice.

11. So my favorite question: Tell us a funny, unbelievable or most impressing situation while you´re hitting the streets.

I remember going to see Tragedy once, but they didn't show up. We did get see a punk piss his pants in the middle of the street. Pretty gross.

Thank you for the interview. Come see us on tour with Doomriders and November Coming Fire. Stay punk. Listen to The Germs.