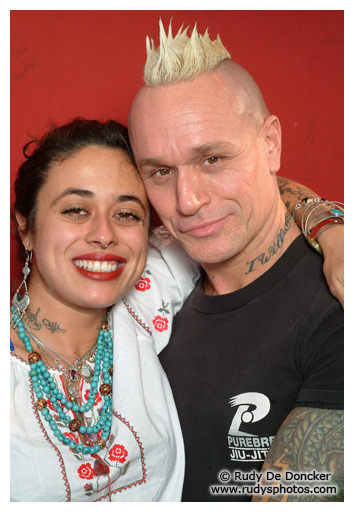 New York hardcore band, Sick of It All (SOIA) was formed by brothers Lou Koller (vocals) and Pete Koller (guitar), Sick Armand Majidi (drums) and Rich Capriano (bass) in 1986. Hailing from Queens, New York, SOIA was formed alongside New York hardcore bands Straight Ahead, and Rest In Pieces which both featured Majidi and current Sick of It All bass player Craig Setari. Majidi joined up with the Koller brothers and Rich Capriano to record the Sick of It All demo in 1986, after original bass player Mark McNielly and drummer David Lamb left. The band began to play Sunday afternoon matinees at legendary venue CBGB's, and soon after released a self-titled 7" on Revelation Records (which was later re-issued on the tenth anniversary of its release, in 1997).
SOIA is now touring off their latest release, Death to Tyrants. Being a female in a position dominated by males is trying at times, but Mei-ling Koller has the fortitude to excel. Roya Butler and Hannah Wagner sat down with guitar tech Mei-ling Koller at the First Unitarian Church in Philadelphia, to find out how she started, and what it takes to be a female in a male dominated profession.

Roya: First off, tell us about your marriage to SOIA guitarist Pete Koller.

I met Pete at the gym. Just some random place, and it was love at first site, and we�ve been together ever since.

Roya: How is it on tour with him?

We try to keep it professional. You don't see us kissing in the corner. People don't even know that we're married until I say to them, "oh yeah, that's my husband, Pete." Because they'll think that I got the job just because I'm married to him. Yeah, I'm married, but I still have to know what I'm doing.

Roya: So you've been married since you first started working with SOIA?

Yep, that's how I got in the loop. I got the hook up, haha. I was just standing around, so I started helping people load in and stuff. So they thought, "Oh, she's a team player." It's very important to be a team player on tour! And so they just said, "fuck it. Let's get Mei to do it."

Roya: Tell us how you started doing merch.

I first started doing merch because there was a guy named Joe Garambone, who I'm sure everyone knows. There was a tour that he couldn't do, so I started doing the merch. And like I said, I started harassing every singer and roadie they ever had and they ever toured with, until I learned how to do guitar tech stuff.

Roya: Tell us about the "no girl"/"no wife" policy.

A lot of bands have a "no girl" policy. They say, "Bad luck! No wives!" And it's not that things happen, it's just that they don't like it. But I'm very fortunate that I get to tour with them and still am some one's wife. It's pretty damn cool.

Roya: How has things changed since you started doing guitar tech?

I'm definitely more confident. In the beginning I was always second guessing myself. But now I'm completely confident, and that's it. That's the difference. Ladies, be confident! Pick up a guitar and learn. You can do it! If I can do it, you can do it.

Roya: How long did it take you to learn what it takes to be a guitar tech? How many years?

The physical labor, and having sexist men around you all the time.

Hannah: Tell us about the sexist men.

Roya: What's the difference between touring America, Europe, and Asia, as far as sexism backstage?

I really don't think there's a difference. You either have a good guy, or a sexist guy, and they're all the same everywhere. You have the good guys who actually have faith, and then you have the sexist guys who think you don't know anything because you have tits and lipstick on.

Roya: Are you guitar tech exclusively for Sick of it All?

I'm trying to branch out, so if anyone wants me, they can email me (skizonation@yahoo.com), but for now, just Sick of it All, yes.
Hannah: Is it tough to be on the road and touring?

You have to be a road warrior; you can't worry about taking a shower every day. That's pretty much the hardest part - not knowing where you're going to shower. You can't be too of a girly girl--but you can still wear perfume and stuff, so it's not too bad.

Hannah: What do you have to say to girls to get rid of the stigma of them working behind the scene?

Smile! Be nice. Not every girl wants to fuck your guy. Just smile and be cool! You'll be surprised that you meet a lot of nice people.

Roya: Have you helped in any of the designing of the merch?

Hannah: We'll you should because your style is so cute!

Roya: Yeah, it's tight. That's why I was thinking you did the designing.

Roya: How did you get into Sick of it All? Were you already into Hardcore?

Oh, no. I'm a hip hop lady. But Hardcore saved my life (I met my husband). If it wasn't for Hardcore, I wouldn't be seeing the world; I wouldn't be enjoying the shows--I love being a part of the circus.

Hannah: So it gave you something productive and meaningful to do with your life.

Yeah, I never thought I'd be going to Europe twice or three times a year. I thought I'd be working in an office; so it saved me from getting a real job! And I get to be a part of the scene.

And the female liberation you feel is awesome! Instead of working in some office, you're getting to go out and do what all the guys do just as good, even though they try and put you down.

Roya: Have you ever considered being in a band?

I have been in a band. It was an all girl band called Skizonation. Actually Rachel from Most Precious Blood, and Brody from the Distillers gave me a jolt. They really inspired me. They were like, "You can fuckin do this, girl!" And I did. So if you believe, you can achieve.

Roya: Are you still in this band?

No, we broke up. I played bass. Allie from Fast Time sang. We had a drummer, Susanne, and Deesha on guitar. We were together for four years. We played with Alanta, AF, Sick of it All. But they all had their own stuff going on. So we took a break. At least I still get to keep touring and being a part of music.

Roya: What kind of music was it?

Hardcore punk, basic generic power chords. *laughs* Like Lauren Hill says, "Don't be a hard rock, when you really are a gem." You don't have to be tough. You can still smile.

Hannah: When you wanted to be in the band, did you already know the bass, or did you just pick it up?

Hell no! I just started learning power chords. It was me and drummer. That's the hardest person to find. For seven months we just practiced, practiced, practiced. Pete was like, "You guys are good." So he started to play with us to see what we sounded like full. He recorded a demo with us. It was really good, and we started playing a lot of shows. Then once when we started to get our momentum, we had to separate. But it was good. Good times.

Believe and achieve, girls, and make lots of babies! That's it.