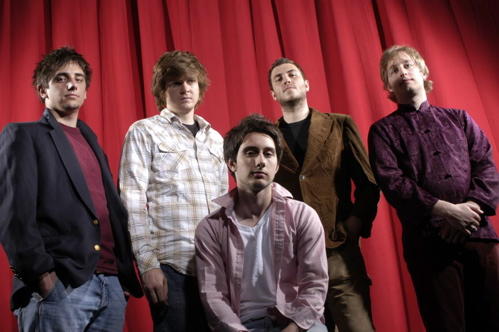 To start with, please give us some introduction to SOCRATIC and its band members.

SOCRATIC is a bunch of friends who got together over the years and play some music. We have Tom stratton who plays drums. Adam Swider on bass. Kevin Bryan plays guitar and sings. Vincent D'Amico tickling some keys and vocals. Duane Okun on guitar and vocals.

I read in your bio, that the line-up of SOCRATIC grew through the years and that with every new member the sound changed. What exact changes did occur?

Me Tom and Kevin have been playing together for years. We got Adam about 3 years ago and Vinny alittle over 2 years ago. We all have different tastes in music and what we like to hear in it. As we got different people that changed in our own music.

Lunch For The Sky is out there for quite some time, how do you see the commercial success of the release?

Hopefully it does well enough for us to record again. haha that would be nice. This is our first record so we don't know how it will do. So far its been goin steadily better and better which is great for now.

Im pretty sure that youve read some reviews for Lunch For The Sky. Could you state any statements youve read, that you did/didnt like.

We had good and bad feedback. One kid thought it was the best cd he has ever heard. Which is flattering but it's all personal preference. Some people bashed us. We had another review that said we should change our name from socratic to " The Arrogant Bastards". Which i think is a good name as well. But all of us are super down to earth and modest guys. Maybe we rubbed him the wrong way or something?

The sound of SOCRATIC is mainly influenced by a piano. Do you see any similarities to SOMETHING CORPORATE?

The only similiarity i see is that we have piano. I don't feel our music style our lyrics are like
them at all. A lot of bands have piano. Not just us and SOMETHING CORPORATE. They are a good band though so we don't mind the comparison.

Which bands did influence you?

I am big Nirvana fan. Elliot smith is another one of my favs. I tend to listen to more mellow music on my spare time. I kind of like to just relax whenever I can. Nirvana isn't to relaxing but to me there is something about it that is.

Which song on Lunch For The Sky stands best for SOCRATIC and why?

Hmm.. thats a hard question. I think most of the songs are completely different but I would say " the Dense Indents." Just for the fact that it goes from hard to mellow to dark to poppy.

Drive-Thru Records has the image of only signing bands with a certain type of sound. Do you feel comfortable being pigeonholed?

I think that is bullshit. Sure they have their bands that somewhat resemble eachother. But how can you say Jenoah sounds like Steel Train. Or any of them sound like Hellogoodbye or us. It's silly to me.

I also heard that you were thinking about changing your name when you were signing to Drive-Thru. Why that and why did you stick to SOCRATIC?

We had a different sound going so maybe thought we should change the name with it. But we had no idea what to pick and Socratic for some reason just stuck. So we thought it was a sign. Don't fix if it's not broken I guess.

You also contributed a song to the Listen To Bob Dylan Tribute. What made you choose Tonight I'll Be Staying Here With You and what role does Dylan play for you?

We choose that song kinda just cuz we all liked it. Some of us have not heard it be4. So we listened to it a couple times. Got the chords down and then just went with it. I like Bob Dylan but i'm not one of those diehard Dylan fans. He was a huge musical influence for many but
just not on me so much.

Do you have any plans to tour Europe in the near future?

As of right now no. Eventually we will get there. We are flying to Japan on march 2. That will be my first time getting out of this country. Hopefully we will play all over.

To tour our asses off. Get on a big tour. Write some ore songs. Just keep going.

Thanks for the interview. Check out our record.