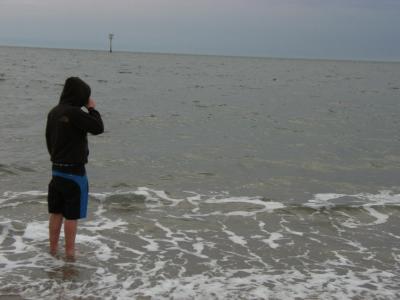 
You have been here for 2 weeks now, how do you perceive your gigs here and what is the difference to your performances in the US?

Well every european country is different from each other in equal way as it is from the United States, from city to city. Cities like Chicago have their own kind of spirit as well as Austin Texas or Gainesville…. For example, we were in Scotland in the U.K with Propagandhi, a great band we appreciate, and the people here are very different as other people in Europe. It’s always a very physical aggressive spirit there, like in the 80ies. It’s a little more like a hardcore culture or something. Also we had a very good show in Paris last night. The punk rock-scene here is very young and fresh. It’s all kind of new here and very small. It seems that they didn’t have a culture like this in the late 90ies. All was very underground and small. The show was about 300-400 people and it seems that this was the first or second Show for them, they were excited about everything. There are a lot of exciting Cities here like Prag or Zürich, were we have a show tomorrow. Yeah, every city has its own unique character. Like the Show in Hannover we headlined. This was great, too.


Up to now i have only seen you perform on festivals or big stages. Do you prefer smaller shows or larger ones, to reach out to more people.

Yeah, a barrier or something can destroy much influence. When we support bigger bands, we always try to play without these, but sometimes there is no other way for the organizer. For our own shows we prefer to choose Venues like youth clubs or alternative centres that it all feels like “it’s for the Kids”. The Audience should be on an equal playing field. Also we support smaller Bands in our Hometown Richmond. We organize small shows and support this community.


Lets talk about your new album “Iron Front”. What were your influences for this album, for the music as well as the lyrics.

Before this Album, we toured a lot with “Dead FM” and we went to many different countries like Middle and South America or eastern Europe. Also we played many Shows in our own country. In this Time we see a lot of political changes in the World as well as in our own country. Many social political events are cured in our homecountry and are written down on the record and in the lyrics. These Songs should carry a different idea or moment in our life from the past 3 years. I think it’s all a little more radical, and the record become a little more aggressive, maybe like “Chorus of One “. We have a new band member, Mark and we written new Songs with the influence of a new person. It’s more melodic, but it’s less intentionally. First we want to have Songs with impact and power. It’s weird when you try to do something less, you doing it, focussing much more. Like in Art or Science, it is something that comes from within.


Me as a Fan, really apprechiate that you have not gone done the mainstream and remained authentic compared to other bands. Can you live of your music now?

Oh no, indeed, we have all normal jobs in our hometown or university places. We don’t have health insurance. The health care system in the U.S is very bad, you know. It’s made very difficult to us to think about a future. We don’t have any kind of economic resources, necessarily. We come back from a tour and we figure out how to work. It’s very difficult, but we love this live it’s amazing. In times where a lot of people downloading your music it’s very hard to live of it, but for us it’s less a musical career than a counter-culture or a mission. But the golden age of punk rock is at the end and we only try to ride the last moment of that, until we disappear back in our hometowns and maybe play a show up and down the East coast.


You grow up in Richmond, Virginia. Tell me how you come in this Hardcore / Punk Thing and which Music you heard, until you started in a Band by yourself.

I guess so it was probably around the late 80’s I started to go to shows a lot and there was a great Band called Four Walls Falling, a straight edge band from Richmond. They first gone to Europe and I loved them. They didn’t talk only about Straight Edge, they talked about environment and politics. Of course Fugazi from Washington D.C was a great band, too. They came down to Richmond and played their first shows here, in reggae clubs and community centers. The whole idea of independent, d.i.y punk was so close. And another Band from D.C Avail, they we’re some kind of old brothers and friends on our first shows. They were very encouraging and organized practice places and set up shows. The punk scene is a very chaotic thing. Sometimes it’s good, sometimes it’s bad and sometimes people care and they don’t, but as long as you true to yourself, consistent and you making music because it’s a part of your character, it can be wonderful.


You’ve always been a very political Band, I appreciate this. What you try to do in your spare time or in your Band to change the political view of the World.

When I’ am not on tour I work with people, who have disabilities, like autism. Many people in the Punk and Hardcore scene do that. They work as a social worker or something else.
Last year I worked with a woman, who was in a wheelchair. This lady was so amazing and funny. She was an activist for the sexual rights of disabled people and a lesbian, too. But she was not able to speak and she used a Laser pointer on the head to communicate. She tried to write letters on the letter board with this thing. The job was so amazing and many parts of “Iron Front” are inspired by her.


In the Last Time I see, that some Kids are listen to political influenced Music like yours or from other Bands and ignore the Message of it. For them it’s only hard Music to Mosh and not to think. What do you think of this people?

I think it soaks in. Its okay to go to shows because you like the music, you have a good feeling or you free. Its all not only pure Entertainment. Punkrock and Hardcore should be challenging and truthful. I think its okay that people aren’t yet engaged in the politics and the social ideas. At the end the messages will come through.


Otherwise I see that the Hardcore Scene, especially here in Germany is sometimes changing into a Fashion Scene with a dresscode and some other weird Shit. I think that’s not the literal Meaning of a Subculture. How is it in the U.S and in which ways you see this Trend?

Its always kind of happening. The people are rebelling against something. They start out, because they feel like outcasts. Its not just another kind of conformity. We went to tour which some other Bridge 9 bands and it was great. There is so much creativity in that scene now, maybe more than I’ve seen in a while in Hardcore. So I think we are a band, who goes between those rules. We are a band of Hardcorekids and Punkrockers. In America there are two parties, very often. There is Hardcore and there is Punk, no one comes together. In Richmond they are kind of together, that’s a very positive thing. I think that the literal ideas will survive.


Let’s go away from the political aspects. What are you Guys doing in your off time besides Hardcore/Punk and political dedication.

We don’t have that. I’ve we did we been writing songs, practicing, volunteering and rescuing animals. My bandmates are trying to help start a venue. Really we’re just touring and come home for a couple of weeks, trying to survive until the next tour comes. If we tired from touring, we did it a lot less, we had a lot more time to being in our communities. Now we’re like ghosts in our hometown.


And to which Music do you listen at the Moment. Tell me your favourite Bands in Hardcore and Punk and beside of it.

I love this Band called New Model Army. They’re not a Hardcore band, but they came out of the punk scene in the late 80ies and they still make incredible music, with incredible lyrics. Our Drummer Eric also loves this band. The new record is very good. On our Tour with Propagandhi, we listen to all records of them. They are such a good band. Also we have a lot of D-Beat and Thrash influence. Tragedy and Modern Life is War are my favourites, too. And we have a time were new bands are good again like Have Heart, Polar Bear Club, Ruiner or Defeater. Also I like Oi-Stuff because it’s very folk influenced. We saw Cocksparrer in Chicago and they were so good live. NOFX played after them, and they were such a joke. Fat Mike was just drugged out and crappy. Cocksparrer were so tight and they are 60 year old man, they could be our dads. The Roots like Youth of Today, Bad Brains or Cro-Mags and of course the Clash are very important, too.

No, thank you very much allschools.