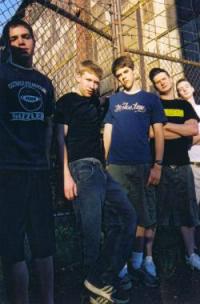 Hey guys, please introduce yourselves and give us some basics on STRUCK DOWN

Well Im Gabe, I sing in struckdown. Im 21 and married. My brother Josiah plays guitar  hes 17 along with Raymond who plays drums. Jameson is our youngest at 16, he plays guitar, and our good old friend Adam plays bass. Adam is in college and the younger guys are still in highschool this year. The basics on SD! Are simpleWe started because we were friends and wanted to have fun. We had played in bands before but wanted to do something differentWe didnt really take the band seriously until a few months later.

STRUCK DOWN is a pretty young band, where do you all come from?

We all come from here in Erie, PA  except for Adam who was actually born in Germany. Adam grew up around here though.

I would describe the music of STRUCK DOWN as energetic Old School Hardcore in the vein of COMEBACK KID, WITH HONOR and YOUTH OF TODAY with a positive attitude, how would you describe the sound you play?

I would describe it as : what we like. Sometimes in more picky cities we have a hard time winning over a crowd because we are not mosh-metal, and we arent quite punk rock. So mostly I work on charming the audience But yeahI guess our sound is mostly fast, aggressive, and most importantly  fun.

Old School Hardcore experiences a renaissance nowadays. Are the people bored of all that metalcore of the last years or how would you explain this trend?

I didnt know it was a trend! I mean, I know of plenty other old school bands around but I just thought itd always been that way. Our goal moreso than bringing back old school is to continually push the limits of hardcore, we hope that each time we put out an album or write a new song its better and different than anything weve done beforewill we accomplish that? Time will tell.

"Purity" is a straight edge hymn. What motivates you to integrate those beliefs into your music?

What role does straight edge play in your lives?

Like I said we are not all straight edge, and not a straight edge band. We do support being drug free and living to high standards and I know for myself I struggle everyday with seeing friends I care about deeply fall to drug and alcohol abuse. The examples Ive seen in both friends and family are what keep me from bending.

What other lyrical issues do you cover with your songs?

I like to sing about as many different things as possible  Ive written about apathy, sweatshops, my friends goofy zombie mosh, and in some new songs Im working on Im writing about losing friends to substance abuse, rising up against injustice, and not letting negativity get you downFairly normal topics but with a new twistI would really like to start writing more spiritual lyrics, but I just dont feel that it is my time to do that right now.

How did you get in contact with Indianala Records? Why was the label your first choice?

Well we just put together a ton of presskitsmaybe 50.and sent them to all the record labels we could think of. We were kind of hoping for a more hardcore oriented label but after waiting for awhile we just never heard back from anyone. Finally I started talking to Matt at Indianola. He seemed just so nice and was really into working with usSo after talking awhile and going over their contract and everything we decided it was a good way to goAnd they have treated us well since. Before signing I wasnt really very familiar with the label at allI had only heard a few of their bands.

I farted on santas lap by the little stinkers and also that one the chipmunks sing.

What do you musically expect from 2006?

Im not really sureBut I think something really great is going to happen. Were headed into a really rough time in this world  the government is ridiculous, were running out of oil, there is just lots of turmoil. All the best music is made during times of great unrest. Its going to be intense.

What are you doing besides music?

I cook in a vegetarian Café, Adam cooks in an Amish restaurant, Josiah is awesome  he just hangs out! Jameson works at a fast food restaurant (yuck! Haha), and Ray really concentrates on his school work and stuff he does at church. Josiah and I are also starting a record label called CRG RECORDS in which we will only be releasing on cassette tape. The name stands for Cassettes R Great RecordsOur first release is of a Texas band called Serious Youth.

Thank you very much for your time, the final comment is yours

Thank you so much for this interview! We hope everyone over there gets into our debut album revolution and we hope to some day tour Europe.See you then!