19.12.2006
Interview with Jake from the Casualties by Roya Butler

Now, years later, that you are headlining tours with The Unseen and Anti-Flag, as well as headlining The Warped Tour, how much further do you feel you need to go to reach your goals? 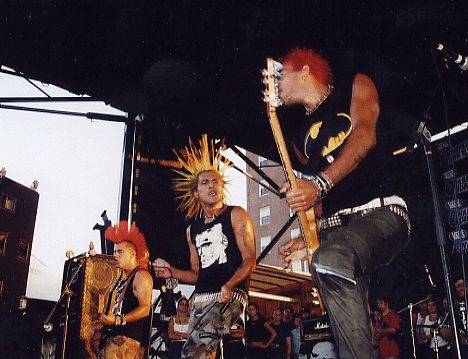 We are open to doing bigger tours but it really just depends on what comes along. We did stuff with Bad Religion, Dropkick Murphies and Flogging Molly. We're going to go to some countries that we haven't been to yet, like South America in March, and in January we're going to Sweden and Russia for the first time.

Tell me about your recent tour to Mexico. What was it like? How did it impact you?

Our recent tour in Mexico went really well. We had a great response and overwhelming support. There was some confusion in Mexico City that we were a "Capitalist" band, so there were a few haters but fuck 'em. Some people are dumb enough to pay a ticket to go see a band that they don't like. Monterey was awesome and Guadalajara was my favorite. I got food poisoning somewhere, then a throat infection where I had to get SIX shots in my ass over 4 days. On top of that I had a bottle hit my head at the last show in Juarez. For me it was a little rough but hey I live in Jersey City!

Tell me about your new album/ what are your favorite tracks and why?/what kind of sound does it have (raw, oi, polished, etc)?

The new songs that I like the best on "Under Attack" are "Social Outcast," "In It For Life," "Without Warning" and "V.I.P." I really like the fast stuff. It gives me that feeling of when I started listening to aggressive punk...goose bumps. The recording is really good but not polished; it's just recorded by people who know what theyre doing for a change. I would say its an assault on the ears!!!!!!!

What are the messages that you want your fans to bring home?

We want our fans to generate their own opinions about things we think are important. The Casualties never wanted to become a political shove-it-down-your-neck type band. We scream about what we know in the everyday hardships of life. We think thinking for yourself is very important!!!!

How do you think the internet has influenced the punk scene as a whole/do you see any changes vis-a-vis the internet as a marketing tool for punk bands?

We think the internet is just another form of communication at this point.

For punk it has its pros and cons.

Pro: You have a ton of people now available at your fingers to get your punk music out there, and for kids in remote areas it's very cool because now they can get into more punk, start a band etc.

Con: you have a bunch of fake types that get into punk without working at it ie: going to shows, traveling to a record/punk store. You had to work at being a punk and that would weed out some of the non-believers. The same reason we hate the filthy rich. 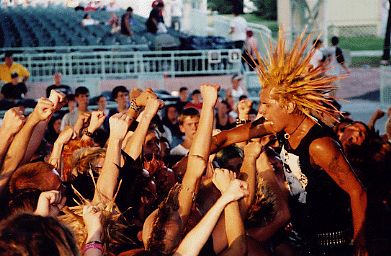 Of all the cities you have played in the US and Europe, what have been your favorite (top 10) thus far?

I know you haven't changed much as people, and your principles remain the same since the 90s when you started. Tell us about the ride / the hard work involved to get to where you are.

The ride, WOW good question; I'll tell you some of the stuff I did. When I joined in 1993, I wanted to help the band so I made t-shirts in high school and then failed a few lessons because we had a show that weekend so I was just printing shirts and patches. I would book recordings (some of them). We used to go to shows in my car with just a guitar, bass and an amp (one time in 94 we supported Rancid at a show in Albany N.Y., we showed up in my car and Tim Armstrong helped us load in. I thought that was cool of him.) Then we started to put out albums and we would back them with tours.

It took a few years to get to the point of a solid line up where the band was more important than drinking or drugs. So by then, a lot of people wanted to see us--there was this mystery about who we were. Fast forward through a few years of doing summer tours in vans, breaking down on the side of the road, living off girlfriends, and sacrificing so much for the band. We finally got on a label with punkcore that had good distribution. Then we took the next step to SideOne and we did Warped Tour. Things just started to explode! We even had a fuckin tour bus. It was way too expensive but extremely comfortable. Now we own an RV and a trailer and we tour a lot. I live off the band, which I never thought would be possible.

What people forget is it took a decade for us to get there! Our last record sold over 66,000 copies and counting. For a hardcore punk band I felt like it was all worth it.

What are the 3 things you feel are needed to make it to the top in punk rock these days?

Last time we spoke you said you've gotten better at your instruments since the 90s. You can really hear that in your recent albums. Tell us how that fact makes the spectrum of music you offer so unique. 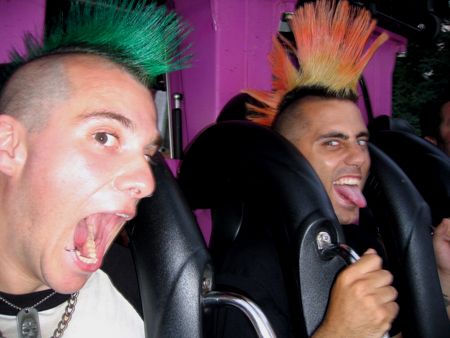 I think once you have been playing anything for a while your sound gets defined. If you practice you get better, simple on paper but you have to put in the work time. I don't try to think about it too much as opposed to just blasting away. With a lot of energy you can do anything you want and it will be cool!

Anything you want to add?

Hey all you Punx and drunks check out our new record Under Attack we spent a lot of time on it. Also check out our label Charged Records for other Punk bands we put out and support. Over and Out...Jake Casualty