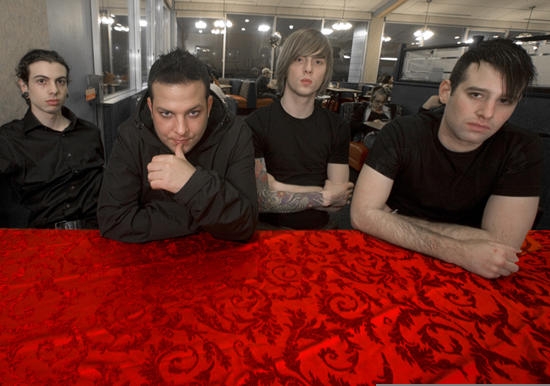 Lets start with the standard question:
Who are you and what do you do in THE DISTANCE?

My name is Jay, and I am the singer and founder of The Distance.

So here is the standard question number two:
Could you give us a brief biography of THE DISTANCE?

Well, The distance started in 2002 but didnt become an active band until late 2003. From then on we toured alot, put out an ep on Bridge 9, did a split with our friends With Honor and a few different compilations and stuff. We took a while off in 2004 because their was alot going on with me and with the band, we recorded a full album, didnt put it out, wrote some more, signed with Abacus in the states and recorded and released "The Rise, the Fall and everything in Between". There is many more stories in between all that but that is the brief version.

I will be honest to you guys: The first time i heard your new tunes i was thinking that this a complete different band. "The Rise, the Fall and everything in Between" sounds so different. What happened to you guys between your last releases?

What happened? We didnt go into writing this album as a hardcore album or a rock album. We just worked on songs. I have been doing hardcore / punk bands since I was 16 years old and I am now 27. I wanted to challenge myself as a writer and challenge the band to write some great songs. I have always hated playing it safe and I think it took alot of balls to release the record we did. Sure we could have wrote Your Closest Enemies part 2 but how would that benefit anyone? There are so many amazing hardcore bands out there right now, really no need for us to write the same songs over and over. I also think its a little close minded of kids to say what happened? if you have listened to our album or even listened to the songs on the internet you would know there is a bunch of fast hardcore songs that are the best ones we have ever written. At the end of the day we are writing for ourselves. I am not trying to please some 17 year old who lives at home and tries to tell me that I am not punk rock. What do they know about me or my life?

I read somewhere on a message board that there was a sideproject named "The Jealousy". Is that true and had this project an effect on your "new" sound?

Yes this is true. We had pretty much recorded a full album with producer Matt Hyde and had talked about what we were gonna do. Since the distance was under contract at the time and we wanted to get an honest opinion of the music so we started a myspace page for it with no names and no pictures, just a couple songs. The reaction was great. After a while things really didnt fall into place. All the while we were still playing shows and we got an offer to do a record for Abacus as the Distance. We explained to them what we wanted to do and they let us go for it. We ended up picking 4 Jealousy tracks to use on our album.

I expect very diverse reactions from your fans. What where the reactions like so far? And what do you think of them?

Lets be honest here, we knew that our record was not going to appeal to alot of the old fans, but at the same time these are the same kids who will support and hype your band on message boards and then next week tear you down and tell you how much you suck. I guess I am old school in the way that I really believe that the internet has watered down the scene alot. It gives every kid who is punk rock a voice to tear you apart and tell you what youre doing wrong. Funny thing is these are the same kids who get to their senior year in highschool and go to keg parties and forget that they even went to shows. Anyway, there are still alot of kids who support us and our homestate has shown more support than ever. I love the new fans because they dont care about things like album covers or that there isnt that much mosh, they just want to enjoy music.

The range of the Album is impressive. From Hardcore-Punk to catchy Pop punk (not just because of the voice that sounded sometimes like Fat Mikes to me) everything can be found. To do Hardcore theres no need for being a good musician (esp. on the vocals) but now there is singing, melodic and professional songwriting. Did you develop this skills or were you all the time able to f.e. sing like that?

I had done a bit of singing here and there but as every other craft I took lessons and practiced a lot. As I said before we wanted to write an album with great songs. We as a band listen to so many different things and I think it shows on this album. We have bands tell us how impressed they are with our album and how they wish they could take chances and do what we did. We dont know if what we did was right or wrong but we feel great about. Music is supposed to be dangerous and so many bands play it safe now a days. There really is something for everyone on this album. We also have to give alot of credit to Matt Hyde who helped us all become better writers and musicians and drive us to not worry so much about what other people would think and do what we wanted.

You recorded the new Album with Shep Goodman. He worked with Head Automatica, Bayside and Mandy Moore (that is what i know from your press text). Did he had an influence on the Songs or did you choose him because of your how songs were already like?

After working with Matt Hyde we knew we wanted to find a real producer, someone to get into the songs and take them apart and pull the best out of us. At the same time we had an overall idea for our album and I think teaming with someone who understand the pop world so well and someone like myself who comes from the hardcore scene it was a perfect match. The way we worked off each other was amazing. His producing partner Kenny Gioia also brought so many great ideas to the table. I honestly would work with the two of them forever if I could. Did he influence us? Sure, thats the point of picking a producer. Some of his ideas were great and some not so much, but we worked together and I love our album. There isnt one thing I would change about it.

Also the cover of "The Rise the Fall and everything in Between" is discussed. What wanted you to express with it and what is the connection between the cover, the title and the music.

Well the cover in the states is a very interesting story. Originally Jake from Converge was supposed to do the album art, things had to be handed in rather quickly so Abacus in the states helped find someone. At first we werent really sure about it but we went with it because for all who dont know when a label is putting in money to do things you want to make them happy. I wouldnt change the cover in america even if given the chance, its funny how much controversy it caused and how upset people got. When the chance came to do our european release we wanted to do a new cover and add some new songs and as a band we did the layout ourselves which is a bit closer to the original idea. I dont blame Abacus america for what they tried to do, but I will leave that for another interview.

Bert McCracken did some guest vocals. How was working with him like?

Bert is a great singer and an awesome dude. Him and I met a few years back on Ozzfest. The Used was on tour in CT and I asked him if he would sing on our album, he said yes. A few months later he came to the studio and laid it down. That is my favorite song on the album. I can not wait for their new album, its gonna be great!

You also changed your record labels. How did you hook up with Abacus and what is working with them like?

We have always been a band that has just put out things on so many labels. We did stuff on Bridge 9, Martyr Records and Think Fast to name a few. We talked with Bridge 9 about the album and agreed that Bridge 9 might not be the best place for it. Surprisingly we had quite a few offers, Abacus being one of them, and after hearing them out and seeing what they had to offer we went for it. Abacus is still very new in the states I think one day they will be a great label. With any label there are ups and downs it's just a matter of how as a band you will use what is available to you.

You are about to Tour Europe together with SOIA and some other great bands. What do you expect from this Tour?

It has always been a dream of mine to be able to tour overseas. I mean look at that lineup, how could you not be excited! These are all bands (SOIA & Madball) that I grew up on, Freddy and Hoya have known me since I was a kid. We have toured with Terror and Come Back Kid before so its going to be great. I am very excited and we were very lucky to have MAD give us this great opportunity.

The Last question: if i prefer your old stuff and am not sure if i like "The Rise, The Fall and Everything in Between". You now have the possibility to convince me from the opposite.

If youre a fan of the old stuff there is still plenty of stuff for you on the new album. I also think that the more rock side songs will appeal to you, you may not admit it but they will. We are just a band who is writing what we want and I am writing from the heart about things that happened to me. I hope that people can get something from it.