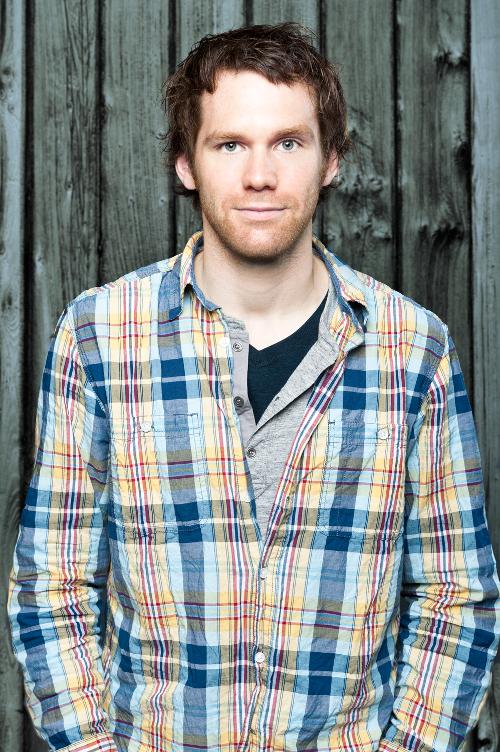 10.11.2012
"The Durango Riot" is a pretty catchy name to me. Where does it come from?
Fred: It's a pretty long story. And it's been kind of a very long time from when we discovered it till we actually took it and it went through all these changes. But "Durango" was there pretty early. That one we got from the "Clockwork Orange" movie – when they're driving around in a Durango 95. And we met this lady last night. She was from Durango in Mexico. No, she lived in Mexico city or something but she talked a lot about Durango... that city. So we will go there soon on tour, we plan to.

How do you like the tour around Europe so far?
Jacob: It's very good.
Fred: Yeah it's really good. Great people everywhere.

So, I see some beers on the table. Is your tour life like the people imagine a typical "rockstar-style"-tour-life with partying all night and everything?
Fred: Yeah… I mean we're not the worst kind, we just like to have a good time so…
Jacob: One or two beers sometimes.

You are currently touring Europe. Do you notice significant varieties between the crowds in the different european countries or is it everywhere "rocking-people" with just different passports?
Fred: Right now we've been mostly around Germany this weeks, so that is more differences between the cities in Germany we've seen right now. But yeah, there are big differences like for the English crowd or the Swedish crowd or the German crowd.

Any differences to the concerts in Sweden?
Fred: There's more childhood-friends at the shows back home. People you may know and other bands coming to see you. As soon as you go outside of your own area you find yourself get tighter together – you got something to show for people that you never met before.

Talking about Sweden. What do you think is the reason that the Scandinavian countries have brought out so many successful bands of different styles?
Fred: I think it's really easy to start a band there.
Jacob: Yeah, it's a lot of communities for children and teenagers where you can pay a small amount per month and you can rent a rehearsal room for example. And you have, like when we started out in our small hometown, there were those idols for us, role models for our music that showed us how to play.
Fred: Learned us the licks on the guitar. (laughs)
Jacob: That's the way it goes in a lot of cities.
Fred: I mean we have it, as you in Germany, pretty good. We have food on the table and all that. So we're all pretty bored, so it's just easy I guess.

You played shows with some of Germany's most successful bands of pretty different genres like "Die toten Hosen", "Kraftklub" or "Donots". What's your opinion on them?
Fred: I think, like "Kraftklub" for example that we did a couple of shows with now – first of all we really got pretty good friends, you know. 'Cause I would not say we're friends with "Die totem Hosen" – it was just really cool to meet them and see this huge crowd they had. With "Kraftklub" it is more just like we were the same gang, we came from the same place it felt like in a way. But the music is really different. I feel that with all the bands I play. But I like that, it's cool to meet new audiences and give them something they don't expect.

"Kraftklub" are kind of high-flying in Germany right now. They got fairly big like over night. What do you think about their kind of music? What do you think makes them so successful?
Jacob: What we have learned especially from Germans that we talked about this with is: It's about the lyrics. Which we don't understand (laughs). You can get like "ich will nicht nach Berlin" those kind of things. You really understand why people who are not from Berlin like it and why they're so successful. And, I don't know, the contest they were in last year – I don't know what it's called but like Eurovision for bands.
Fred: It was good timing probably. Like it often is with overnight success.

I recently read an interview where you said you played in Germany back in your early days. Have you noticed any changes here in Germany since then?
Fred: Uhm, I mean when we were here last, in the beginning we got here really early when we got out in Europe just to play, you know we just wanted to get out. So we saw really the flip side of every country and every city, you know you see these really really small punk clubs everywhere. If you're lucky you get some food maybe… So yeah it has changed, but I don't know if the country has been in a bigger change or anything.

Let's talk about your music: You guys have your second album out now. What do you personally like most about the album?
Fred: I think what I like the most is that I hear something that is really our own on it. The first record was – it's still very chaotic what we do, a lot of mix of everything – but now it becomes something of our own because we play a lot together. This is what I really like, I think this record is the first step, maybe.
Jacob: It feels like we have us own, in a wider way then the first album – it was very fuzzy and we didn't want to sound like that for this album. It really turned out very good.
Fred: More free, I think.
Jacob: Yeah.
Fred: And it's just better I think. The songs are better, the band is better. We're really proud of it.

It's been about five years since your last album. Most bands today seem to push out an album at least every two years. What are the reasons you take more time between your releases?
Fred: The first album we basically did on ourselves in the beginning, so it took a couple of years and then someone discovered it. Then another year they wanted to release it in Japan. So it was just we had like some time when we just toured it. And then when we wanted to make a new record we found that we didn't have a company because we didn't wanted to be on the company we were at anymore. We just decided, since it had been such a long time, to take it and do it for real. And just wait until it's great.

How was it working with Joe Barresi as a new producer, who was producing Tool and other big names before? Did that have any influence on the music?
Fred: Yeah absolutely! I think it really had. Because he was with us when we sat back home at Jake's place in our hometown and wrote songs, we started sending them over to him like cross-atlantic-collaboration. So he just listened to the ideas and but didn't change that much. He just came with small input. And it was just interesting to have him there all the time. So when we got over it just felt really natural.
Jacob: And he had a big influence on how the sound went. Like the effects, he was sitting on the floor, pushing stompboxes and pedals – so it felt like he was a child again. It felt like he enjoyed it and we enjoyed it as well.
Fred: It's really funny when you realize, when you get there, he's just a music nerd like we are. It's just the same kind of guy, he just likes the sounds and music. So it was great. Good experience.

I did a little research on you before this interview. You were featured on the Pro Evolution Soccer 2010 Soundtrack. How did it come to that?
Fred: No one of us has it (laughs).
Jacob: It's from the publishing company. They pushed it into there.

But I think that's pretty cool...
Both: Yeah, that's really cool!
Fred: Before anyone had told us, there were these kids writing about it…

I must admit as I first listened to the preview of your new album I thought "this should be on the Soundtrack to a Tarantino film" – ever thought about that?
Fred: Yeah, this is our blink to him (laughs).
Jacob: We hope he is listening.
Fred: I don't know how we got to that. It just came natural.

I think it's kind of "roadmovie-style" sometimes…
Fred: Yeah. I think the weeks in the south may have done that for us.

Your website redirects to your Facebook fan page and you seem to be pretty active there. Do you get anything out of the web like constructive criticism or helpful feedback?
Fred: To be honest I was pretty against the whole Facebook thing for a pretty long time. But then I realized it is pretty great to talk with the fans. It's great.

Did you know there's a german wikipedia entry on the band but no english one?
Fred: That's strange. We haven't done it. Should maybe write one. In Japanese as well. Maybe.

Final question: what can we expect of "Durango Riot" in the near future?
Fred: The unexpectable. Maybe.
Jacob: There will be a third album. A lot sooner then the second one. So probably this spring.
Fred: When we get back now we're gonna start writing and working on that. We have a lot of new ideas so just start with the demos and just get it out.

We're looking forward to that! Thanks for the interview, guys.
Fred: Thank you.
Jacob: You're welcome, thank you.