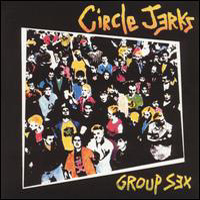 Formed in 1979, The Circle Jerks were the band Keith Morris founded after quitting Black Flag the same year. On listening to this release you would never haev guessed this was a different band! This album is simply a continuation of the Nervous Breakdown EP he did with the 'Flag, (Wasted is
even covered here), but done with more humour and reckless abandon than THAT band. Morris' trademark sneering Johnny Rotten type vocals are still an significant presence, but the musically is sonically faster and punkier than before. 14 songs in 16 minutes! The album is over before you know it and leaves you gasping for more. It also features Greg Hetson and his trademark
buzzsaw guitar assault we've become accustomed to in Bad Religion. The Circle Jerks would never be the same again.