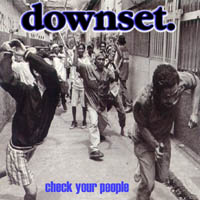 Finally downset. managed to record a new CD. After waiting for years and hearing thousands of slip-up rumours the guys around Ray Oropeza signed a deal with Epitaph.
Check your people is actually a typical Downset record: Hard Crossover with lot's of brakes and very intelligent lyrics. But times simply didn't just by them: they've made some experiments with melodic singing that are nice but nothing special. Still this record is variant until the end as there are some really hard songs like "Fallin Off", some more Hip Hop influenced songs and some really groovie songs like "En El Aigre". I don't think that downset will win new fans with that CD, the ones who loved Downset over the years (like me) will still love them, the ones who never liked them won't have any reason to like them now.
Unfortunately I didn't get the lyrics but reading the song titles and understanding some parts they seem to be in the old Downset tradition: honest, intelligent and critical. Downset definetly are a band that has something to say!