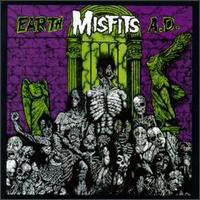 Earth AD was the last Misfits album to feature Glenn Danzig. Later in the next few months he would depart to form his own band Samhain and later Danzig. Musically this is much faster than previous works such as Walk Among Us and Static Age and for that reason definatly more hardcore. Whilst those earlier albums tended to integrate elements of melody into the hardcore rampage, this release with the sole exception of Die, Die my Darling is a far more straightforward almost thrashier effort. The album is only 21 minutes long and is so relentless in its attack that you rarely have time to pause for breath. However this does make it a far less varied album and
those of you looking for Last Caress part 2 will be disappointed. However in comparison to shameful modern day cash-in albums like American Psycho and Famous Monsters, this is a satisfying conclusion to the classic Danzig era and a testament to the influence they had on latter day bands ranging from Metallica and A.F.I.