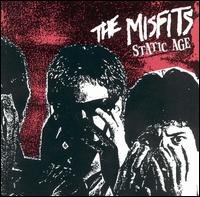 This album was originally supposed to be released in 1978, but in fact didnt come out till 1995. Featuring Both original vocalist Glenn Danzig and longtime bassist Jerry Only, this collection of 17 tracks are very raw, not just in their production, but also vocally and musically. Judging from this album it is easy to see how Danzig earned his nickname The Evil Elvis, where his vocal style resemble that of the king. It is so evident that this was The fits first proper album, from the naïve playing and youthful exhuberance on display here. Fans of their more aggressive hardcore style on Earth AD/Wolfblood will be slightly disappointed by this release. Instead
of the sonic blur more resemblent of that album, what you have here is more melodic and catchy punk rock, not a million miles away from what The Ramones were doing, with a touch of the aforementioned Elvis and 50s style rock nroll thrown into the mix. This is a prelude of what many considered their best effort Walk Among us, with some of the songs being fairly
catchy and poppy, but also swinging too, especially on tracks such Return of the fly and Hybrid Moments to name but a few. A good and solid if not entirely essential album.