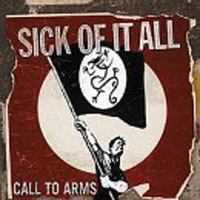 Sick Of It All - Call to Arms

This undoubtedly has to be one of my favourite Sick Of It All albums. Actually make that my favourite album of all time. It looks like the move from East West to Nofx's Fat wreck Chord label helped the band to relax and actually have fun making music again without the pressures being on a major label can bring and on nowhere else is this evident than on this album! The album is packed with everything that makes Sick Of It All or Hardcore for that matter great. Instruments are played with blistering speed and aggression, but the highpoint has to be vocalist Lou Koller who barks out lyrics like a bulldog chewing on broken glass. Highlights of the album would have to be 'Call to Arms', 'Potential for a fall' and 'Sanctuary' (In my opinion one of the best songs they have written). This is not only a far cry from the days of 'Blood, sweat and no tears' where they tried too hard to sound like Agnostic Front, but is especially superior to the overrated but
still excellent 'Scratch The Surface' album.