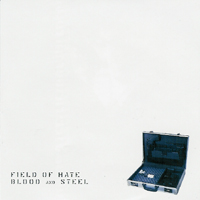 'Fuck your Faith, fuck your everything, fuck all the shit that you think mean a fucking thing...' and so on goes the first track of Field of hate' debut Blood & Steel unsurprisingly called Fuck Your Faith. They sure were right when they said they wanted to write songs which sounded 110% aggressive without any poetry-bullshit-gimmicks that would cause mayhem in the pit. Except that this can only really apply to the lyrics which to be honest could do with some 'poetry-bullshit-gimmicks' as frankly they are very poorly written. Swearing their way through 4 tracks very average
Hatebreed influenced HC it's quite clear that FOH don't care what people think of them. However maybe they should as they would then realise that it's gonna take a lot more than swearing for people to be impressed by what is on all accounts a frankly dull and uninspired debut effort with a rubbish production job. Frankly if these guys want to create mayhem in the pit then they will have to do better than this. Very poor.