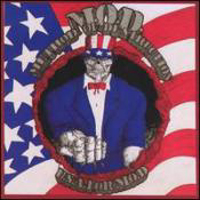 M.O.D. or Methods of destruction is Billy Milano's full time band and unsurprisingly they sound identical to his one off supergroup project S.O.D. Released two years after 'Speak English or die' 'U.S.A. for M.O.D.'pretty much the same Anthrax influenced punk metal blueprint. Like 'Dealing
With it!' and 'Retaliation', this is an album both metalheads and punks will have little trouble getting into. One thing this is not is serious, especially with songs like 'Don't feed the bears' and 'Ballad of Dio'. However like its predecessor 'Speak English or die' it has at times some rather controversial and dodgy lyrics displayed on songs such as 'Imported society' and 'A.I.D.S.' which on first appearance seems to be racist and homophobic respectively. However if you take it as the joke its meant to be than this is a humorous and speedy release which no fan of hardcore/thrash should be without.