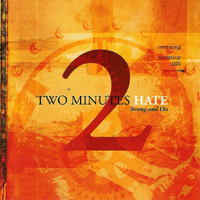 Two Minutes Hate - Strong And On

Unlike SOT, TMH are a completely different beast. This is straight up, no nonsense HC from Philadelphia home of the brilliant How It Ends. From what I can gather these dudes have been in the scene a while touring their balls off with NYHC legends Murphys Law as well as Vision and In My Eyes. This album is also not actually a proper album, but a collection of never before available demos and seven inch material. This is the kind of album that a band usually releases after they break up as a treat for the fans who have supported them throughout the years. Kinda like what post-hardcore rockers Bluetip did with Post Mortem anthems or Life of Agony with 1989-1999. Anyhow this album features two different vocalists and to be honest you wouldnt notice as they sound virtually identical. Can Thorp records do no wrong? Everything Ive heard released by them has been outstanding and this is really no exception. It is VERY fast and angry and reminds me kind of Agnostic Front in places as well as some OI! influences in the shape of The Bruisers. The lyrics are slightly political
in places, but the majority of them deal with themes of anger, frustration and alienation, kind of what Black Flag were singing about some 20 years earlier. On the whole quite an impressive collection from a little known band.