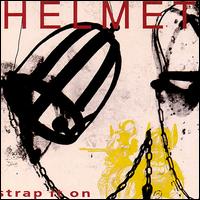 Helmet - Strap It On

Arriving from the same school as The Melvins, Rollins Band and The Jesus Lizard, Helmet bombarded us with this their debut effort way back in 1990. This was a year before punk supposedly broke, as Sonic Youth claim, with Nirvana crashing into mainstream consciousness with Smells like teen
spirit. However, Helmet had about as much in common with Nirvana as Bush Junior does with a good foreign & domestic policy. In contrast to Neverminds fairly accessible, radio friendly punk pop, Strap It On is 9 tracks of Black Sabbath inspired sludge. Guitars are tuned down, drums are
played with jazz influenced time changes and vocals are shouted out with attitude. The sludgy guitar playing resembles prime time Melvins, while the stop-start rhythem section bring to mind Fugazi. Frontman Page Hamilton has a fairly controlled yet agonized shouty hardcore vocal style. It is safe to say that comercially at least Nirvana could sleep easy. In fact lyrics and
vocals are fairly sparse on this release, in comparison to more experimental albums such as Betty, instead preferring to let the pummelling music do the talking. The only critism of this album are its length and production. But minor quips like this aside, what you are left
with is a thoroughly engaging, heavy and enjoyable piece of work.