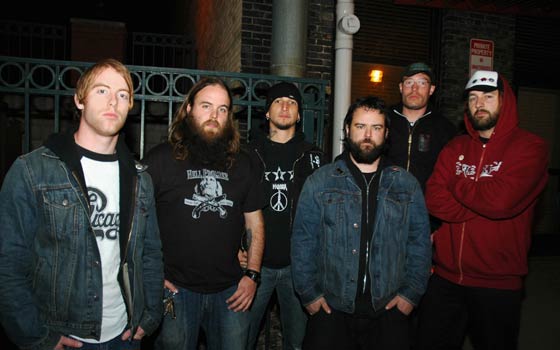 Q: Tell me something about 3 Inches of Blood, and how the band came into being.

Jamie Hooper: Well, were from Canada, weve been around for about six years and originally it started as a reunion of an old band, but two of the people couldnt come so we got two other people to fill in, but when we actually set down to teach them the songs we thought: Why teach them the songs? Lets just write new songs and make a different band! And so we just started jamming and after we smoked a couple of joints thats what the sound that came out was like.

Q: What was the band you originally wanted to reunite like? Was it Hardcore, Metal or already close to what 3 Inches Sounds like now?

J: It was more like really spasy hardcore like chaotic hardcore, but the songs werent worth relearning so we just made a band that we wanted play the songs more.

Q: How did it all go on after jamming out? How did you get started? How did you manage to get a record deal with Roadrunner finally?

J: For about two years we all still jobbed and we couldnt get on tour all the time and it was hard to get peoples work schedules especially since there is six of us it is really hard to coordinate them or do anything. So we finally just all quit our jobs and went on tour as much as we could, and just from touring all the time that the label saw that we were hard-working an serious about it. So we sent them demos like most bands do, and because we toured so much they came and saw us a few times, and saw how serious it was, and thats how it started.

Q: When did all that live show thing that you are pretty infamous for start? I read something about viking background on stage and also especially in the lyrics?

J: Well, we dont have like swords or anything on stage, but since the beginning it was sort of a fantasy theme band because the bands weve been in before they had like messages, political things to say and stuff like that and we wanted to be a band that wasnt telling people what to think or how they should be. We just wanted a band that was likereading a good book: an experience instead of telling people how shitty everything is. A band where you can just go and have fun, and forget about shit. Just have a good time. No preaching anymore! I am sick of bands that sing about how their girlfriends dumped them, and how their day sucked, and how the world sucked. Everybody knows that  you dont have to sing about that. Nobody wants to hear about that.

Q: So its all about having fun!

J: Yeah. Just have a beer and bang your head!

Q: What about musical influences? Iron Maiden, Judas Priest? Someone said you sound is a bit like Iron Maiden on speed

J: They say like its Judas Priest on crack or so. But we actually listen to everything from Black Metal, Power Metal, old Classic Rock. Well listen from like Cannibal Corpse to Neil Young and then.its a varid influences that we draw from. A lot of New Wave of British Heavy Metal influence as well as old German bands like Kreator and Destruction and Running Wild. It is a lot of classic Metal influence for sure.

Q: What about that infamous New Wave of British Heavy Metal?
J: Totally an influence! Like UFO, Tigers of Pan Tang, Thin Lizzy and things like thatof course Judas Priest!

Q: What do you think about all those new categories of Metal and Hardcore? Do you think they evloved from the original Metal or is it a split or even contra-movement?

J: There is not a lot of bands that play classic Metal. Actually it seems like there is more these days As for new Metal as in NuMetal I am not a big fan myself, but there is a lot of Metalcore these days. Yet it seems like a lot of bands already played that style pretty well in the mid-nineties, and now it seems like it has become more boring, and that bands are playing heavy for heavys sake but they lack guitar finesse. Like: Where is the solos? Give me more solos!!!

Q: How was it to be touring with The Darkness?

J: It was very interesting! At that point that was the biggest crowd we played to by far. We had only played before aq several hundred people before that and then there were like 4,000 people. It was interesting because it was an audience we normally wouldn`t play for. But it was good though. Before the tour I thought this was gonna be terrible and I was like: That band sucks. But after seeing them play I was like: Wow! They were really good. The have a very good live performance, and they seem like nice guys so it was a good time. Although over there we heard some people say that The Darkness is a joke band, so we must be a joke band and stuff. The reason we went on that tour was because we used to be on the same label not the same label but we were on a label that was a subdivision of their label and thats how we got to tour with them.

Q: I heard that some people really think you are a joke band, and cannot be serious when the only listen to your album, and then, when they see you live they realize that it is serious.

J: People are very quick to judge when they hear a band. They automatically think they should look a certain way, they should act a different way. And we definetely dont look and act as we sound. People say we look more like HC-kids than a Metal band. People are so quick to have ideas that we just ignore them. And if we were just a joke, it would be a very long and expensive joke on us. We are really good at keeping this joke going.

Q: Tell me something about your future plans! How much longer are you here for? 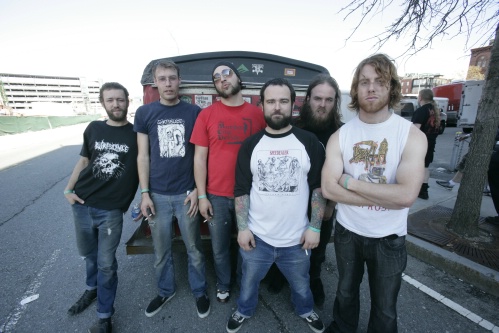 J: Were here for only four more days. It was a big tour. We played six shows in Germany, six shows in the UK, and the rest was like a show in Switzerland, shows in Holland. So it was a little bit of everything. So, we are with HIMSA right now which is a lot of fun because we are frineds with them, and they only live a few hours away from us. We play with them a lot, and have been on tour with them and The Black Dahlia Murder in the US. We have been friends with them for many years, so it is more like a vacation than a tour.

Q: And how is Europe so far? What do you think about shows over here?
J: I love Europe! In the US a lot of people just go to shows to socialize. It seems in the US a lot of people seem to go inly for one band like it will be empty for the emtire show and when the last band is on everybods is there and its full, and then all of a sudden they disappear again. Here it seems people come at the beginning, stay the whole show, and watch all the bands. So that is a little different. And also it is nicer to go to a show and not drive ages between shows. Your normal drive to a show in the US is twelve hours, and here its like 2 hours which is awesome. We spend so much less time in the van!

Q: And you get a place to sleep, free food, and beverages

J: You get a lot more beer. In the US and in Canada half of the time we sleep in like rest areas on the side of the highway. We sleep outside half of the tour so over here its much nicer because you get a bed every night. And for vegans touring here is always getting good vegan food and stuff whereas in the US that does not happen. There, when we get to a show they will say like: Ok, here is 12 beers. And there is six of us in the band!!! So its really nice over here.

J: We have been trying to write on tour, but we are always on tour, and that makes it hard. So when we get home we are taking 2 months off, and so January/February we are just gonna take all the stuff and the ideas we have and all the riffs we have and finfish up some songs, and write some new songs. And then record hopefully early next year and then get back on tour. Always the same cycle.

Q: What about jobs?

J: We dont have any jobs. This is our job  making music. Drinking beer and yelling is my job!

Q: Can you live of that?

J: Well, sort of. None of us have homes or anything. We dont live anywhere, were on tour all the time so there is no point havnig a house or anything like that. That makes it easier. It is a nomadic life, but it is good!

J: Sure, no problem!