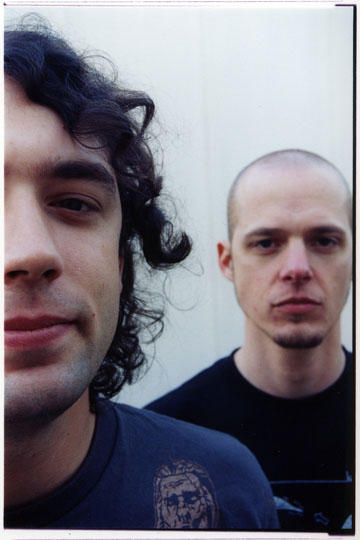 I knew I wanted a name that sounded huge, and ugly, and a little fun at the same time. I looked for synonyms for words like "heavy" until I decided on the Indomitable Iron Sloth. Apparently no one had ever heard of the word Indomitable or nobody knew how to properly say it, so word spread around town that there was a band called the Abominable Iron Sloth around and they were ok. I thought the word abominable had a better ring to it than
indomitable anyway, so we went with that.

You all have played in former Bands, is that right?

Yes, I played in a band called Oddman for a few years with Cayle. After that Cayle joined Ghostride. Then Cayle joined Iron Sloth with myself, and 3 other members of Ghostride joined us about a year later.

How did you guys meet each other and who got the idea to found "Abominable Iron Sloth"?

We just met through playing shows and mutual friends. I (Justin) started the idea writing songs on guitar and screaming and Cayle joined me playing drums. We played just as a two piece with an occasional guest bass player for about a year until the other guys joined us.

How did you come up with the comic and its story in the booklet?

I must've written the story for that comic about a year and a half ago. When it came time to design our cd, the idea came to us to turn it into a comic drawn by our friends Matt Loomis and AyeJay.

To be honest I couldn¹t see a clear connection between the contents of the comic and the lyrics of many songs. Is this your intention or relate the lyrics to the comic?

No, the comic was just an idea after the songs had been recorded. The lyrics are more of a view of the world I suppose.

Can we expect further records of the "Abominale Iron Sloth" or is this an unique project?

Yes I think there will be at least another record if not more. I don't know where this band is going. I guess it just depends on that.

Your music sounds very intensive and dark and many people say that its very strenuous to listen music like yours all the time. My question is if you got some musical influences totally apart from metal and sludge?

I listen to a lot of talk radio during the daytime. I've been tired of heavy music the last few months and I've just been listening to oldies, old country, some dance shit.

What was your intention for the "Parisite Hilton S" song?

You know I've looked at this question on my screen thinking of how many ways I could answer it for the last fifteen minutes, and I really just don't know what to say. It was just a fun song really.

Are there any tour dates planed for Europe or especially Germany?

We're trying to get some European dates lined up, hopefully this summer or fall.

Do you know and like the European and German music scene are there any differences to other countries?

I must admit that I don't know it all too well. Here we only hear German bands every so often, so it's hard to get a feel for what the whole scene there must be like. I went to the UK recently with Willhaven and met a couple German dudes backstage who brought a keg of beer called Bitburger. If your scene is anywhere near as good as the beer I think I'm excited.

Thank you very much
Johannes