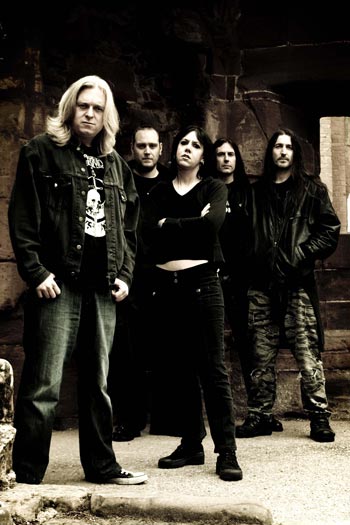 Q:Such a long time now since the band has been founded. How did you manage to keep Bolt Thrower alive over all those years?

W: Its about 20 years since it started, and were amazed ourselves  we never thought it would last this long. We try and keep things fresh, try keep thw whole essence of what we do really tight, and we get along very well as friends. Even when I left some time ago we would stayed in touch, so it was easy for me to come back. I think we keep focused on what we try and do, we try and retain the same ethos. That keeps us motivated and excited, and we dont go on tour every year so we dont over-kill. We dont release an album every year, so it is still fresh to us, and we maintain that excitement, and the chemistry in the band works really well. I think you can see it when we are on stage, we enjoy what we do. If we came to a point where we didnt enjoy what we do then wed stop doing it, but until that point comes we will carry on forever.

Q: When you started out as a band: was it supposed to be serious right from the start or was it making music just for funs sake?

W: We didnt really have a long-term plan, it kinda just worked out that way really. It originally started when Gav and Bas met at a gig, and saw that the band, how much fun they had and they thought: Yeah, we could have a bit of that!We could do that! So they took the elements of the kind of music they liked and started the band, and then it just flowered from that point onwards. We were very lucky in the early days to get some support from John Peel which helped to get the ball rolling for us. And also gave us some inspiration at an early point being a band to see what a professional recording studio was like, and be air-played on national radio, and it all then spiralled from that point, a bit out of control, slightly in control, or chaos. We also still got a lot of friends that stayed with us from the early days which has maintained our status within the music industry. If it wasnt for people like Peel in the early days we may not have had such a long career so we are very lucky indeed. It luckily has never gotten to a point where we were not in full control of our career. We pretty much control our surroundings and have our hands in the production of the records so we take a long time and we pride ourselves in what we do when we record, and when we tour as well. As you notice we dont tour that often so there is no saturation point. A concert like tonight, its very special for us, its almost like a party every night. There was no plans back then, it kinda evolved from then. We always ourselves in check and keep our feet firmly on the ground, and we listen to what our fans and followers want. We are quite in touch with those people.

Q: Was it hard? Especially with all these line-up changes?

W: Slightly. Gav and Bas have been in it for about 20 years and theyve done it all the way through. Three different vocalists including myself and each vocalist has brought a different kind of flavor to the band. But the essence is that we are all friends at the end of the day, and we just involved in Bolt Thrower, and there is nothing else for us in life that can touch getting on stage and performing our songs to people. That is just a special feeling that you get, it is unbelievable. And the response we get off people, especially on the last tour, has been phenomenal. Such a warm reception we get almost every night, it is marvellous.

Q: How did your music change over the years?

W: Id say rather than a large whole scale change, we kinda like evolved slowly from each album. We get criticised a lot for each album sounding the same. And for us, thats just a good thing being around for such a long time and seeing bands we like changing their sound. Where we have decided in a very early stage to retain these actual elements which create Bolt Thrower. We tried different things, the production may change slightly or there might be a different kind of groove to some records, but ofr us it is important to retain that heaviness that wall of guitar-sound. That is Bolt Thrower at the end of the day, and that is something that will never change. I think if we lost that then wed be sounding just like any other bands. A lot of bands follow trends and just go along with the newish things, and then within six months later it changes again and they are lost. They have lost their fan-base and themselves, so to us it is really important to retain the essential elements of Bolt Thrower and it works with us and gets us back to the days of our Punk ethos. Just small changes, but no massive changes  that works for us.

Q: Why didnt you like playing Open Airs at first? And then you played the With Full Force?! 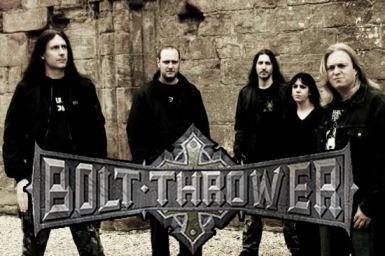 W: Weve been selective with what we do. We get offered a lot of festivals, but we dont like the pricing policy at those gigs, and often they convey a lot of bands that means on, off, on, off, and for instance it is also important to maintain our integrity with merchandise prices et ctera. So we pick and choose now what we do. We do Rock Hard because they have been very helpful towards us throughout the years, so as a gratitude towards them we do the Rock Hard Festival this year. We may one or two next year, but we like to limit ourselves festival-wise because we dont like the set-up. We prefer to do our own gigs where we can control the whole environment, and the whole night is ours then, and thats what were best at really and we like it that way. I didnt play the first WFF, but Basil over there, he says it was amazing (Basil raises a thumb high in the air and nodds in agreement). It is amazing to play to a huge audience, but then again it is strenuous to jump on a huge stage with just a line-check, just a small light check and then play 45 minutes of set and we have come a long way just to see you for 45 minutes. We try and steer away from that as much as possible and do our own shows if we can.

Q: How do you consider the UK or the European Metal scene in general? And how influential for other bands especially for US bands?

W: Back in the 80s there was a lot of bands like Napalm Death or Carcass that came from a certain scene that developed within the UK. Before, there was no such thing as Death Metal. We were called a Grindcore band although we didnt fit into that corner, we couldnt call ourselves a real Death Metal band either  we really didnt fit into any kind of pigeon hole really. It is nice that the UK metal influenced other bands in other countries, but in general it is really difficult to be a band in the UK. Maybe to a certain extent we are less influenced by other things that are around us because we were pretty much focusing on what WE wanna do and fuck the rest of them. It is, though, quite an honor in many respects to know that we have influenced other bands.

Q: What does the future hold for BT?

W: The future is looking good! Weve just released the new album Those Ones Loyal, weve had phenomenal reviews and overwhelming positive response from everywhere and I havent read a bad review yet. The gigs themselves have been amazing. Absolutely amazing. So were taking just each day as it comes. There is no huge master plan for Bolt Thrower, we just take what we get offered, we mow it over and decide if were gone do. After these dates weve got the Rock Hard Festivaland weve got some prespective US dates, and then well think about what were going to do next, but its gonna end up in having fun. That is the bottom line at the end of the day. We just love what were doing, and were gonna carry on that way!

Thank you very much for the interview!