Moritz: Hi Henkka! Great pleasure to meet you! In fact, I have to change the questions now a little bit, because Janne was supposed to do the Interview. 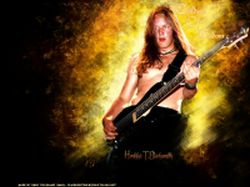 Henkka: Ah, I can try to answer for Janne.

Moritz: Ok! So let's start with some general questions! So now you're back in Germany, it's the first gig in Germany on the Are You Dead Yet Tour. How do you feel to be back here?

Henkka: We all feel very excited actually. We realized that we haven't been playing here for three years now, almost three years. We've been touring the USA the last two years and it's great to be here now, because we almost forgot how it is here. I'm looking forward to seeing how the people are, and we all are very excited.


Moritz: So you have been touring Australia and Japan just some time ago. What have been the experiences there been like? Was it the same with Japan as everytime, these amazing crowds? You are so popular there.

Henkka: Yeah, Japan is always the same! Always very good. You know what you get there. You get excactly what you expect. This time we toured there very long, we did 9 shows there. We've been to Australia and did 4 shows, and all were sold out. That was great too. We're very happy about that.


Moritz: So, you're touring the "Are you dead yet?"-Album. How do you feel about that record now, some months after the release?

Henkka: Lucky, always we've done an album we always think that's the best one.
That's very important for the musicians I think, they always can say "yes, we are little bit better now". Are you dead yet? is so much different to the "Hatecrew Deathroll" album. Kind of two different worlds. So I love Hatecrew Deathroll and I am proud of it too, when it came out, but somehow the new one is little bit better because different. The new one is not so predictable.


Stephan: In how far predictable? Concerning the "Hatecrew Deathroll" album?


Moritz: Before you started the rehearsals for the current album you came in trouble because of Alexi's arm.

Henkka: Yeah hehe. When he was drunk he climbed up a car and he fell down. He smashed his face and he broke a couple of bones (was für ein Satz! Legendär!!). So he couldn't play for some months.


Stephan: Do you know the intention for doing this?


Moritz: Just take the "Are you dead yet?" album and compare it to all the other C.O.B.-releases. Would you see any differences there? Or is it just one step further in the story of Children Of Bodom?

Henkka: We didn't want to change anything. I think Children Of Bodom is one path we are going. We started with "Something Wild" and now we are here. We never stepped away from that path. We never tried to change our direction or to go another way or to try a new style. We just try to play the songs and the music we want to do. Okay, the new one is little different, but better as we think. We always do music the same way: Alexi shows the riff and then we are jamming together, we're putting the songs together, and then there is a new album! It's just a natural development.


Moritz: So you are very proud of the album, but not of the cover-artwork. It has been Janne and Alexi telling that in the Rock Hard Magazine some months ago. 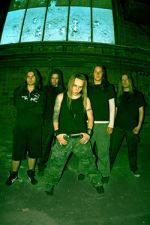 Henkka: Yeah, that was before they saw the final artwork. They only saw the raw version. Alexi thought this would be the final and thought: "What the fuck is this?? Looks like a demotape!". But the final one was better then.


Moritz: So now, for the people who don't know so much about the band, please just give a little history of Children Of Bodom.

Henkka: Hm, yes, we have been friends in school. Alexi had the idea to make a band and I joined. So then we did a couple of demotapes and then the first album and in 1997 we got the record deal for "Something Wild". Just before that album, Janne joined the band. He was supposed to be a session player, but he remained in the band as you can see.


Stephan: How long did it take to get your record deal and how many demos did you record?


Moritz: So what are your personal finnish top bands?


Moritz: And what are your personal influences or favourite bands outside the metal scene?

Henkka: There's a lot. We all love different styles of music. First of course there is Rock-Music like AC/DC or a finnish band called Peer Gynt. Then I like some funky stuff like Prince, he is a genious, the Red Hot Chili Peppers. And almost everything Madonna has done. That's really influencing.


Moritz: What was your personal first touch with metal?

Henkka: That was either the first album of Deicide or A Vulgar Display Of Power from Pantera. After that I got the first one of Cannibal Corpse, and then Slayer's "Seasons In The Abyss". Those four albums were the beginning of my metal career.

Henkka: No I don't have any idols. But as a musician for example Flea is so great (Chili Peppers-Bassist) or Slayer as a band, kind of a perfect career in there world of heavy and extreme stuff.


Moritz: So Children Of Bodom always plays music with very high and hard technics to play. What are personally for you the most difficult ones to play?

Henkka: The new ones. Usually of course the new ones are most difficult. At the moment it's "Living Dead Beat". It not so fast, but has some very hard parts to play.


Moritz: Okay! Then there is one more question at the end: If you would have the possibility to create your perfect band with all the musicians living all over the world: What would be your line up?

Henkka: Well I mean of course Children Of Bodom is the perfect band for me. I have my friends there, great musicians, the music I live, really perfect.
But if I had to choose: Then there would be Zakk Wylde and Steve Vai, Flea and Phil Anselmo. Drummer would be Chad Smith from Chili Peppers.


Moritz: So that's it! Thank you for your time and hopefully play a great gig later!