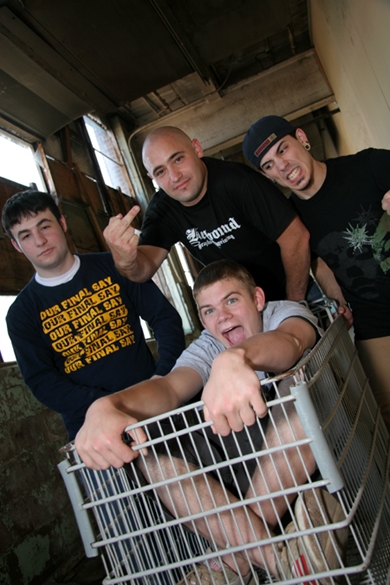 Everyone knows DEATH THREAT but not a lot of people know CROWNS OF
KINGS. Why should they check you out?

Wes Fortier: Crowns of Kings is my new project. Its me, and a bunch of friends from other CT bands that came together. DT is on hold for a while, and i always wanted to do something on the side, so this was my perfect opportunity to get it off the ground. we are a fun band, with something good to say! were not one of those bands that mixes up a bunch of cool words to sound clever, or chases the newest trend to make a buck.... we are real. we are down to earth, and we are here because we love hardcore! plain and simple. we love playing, being around like minded friends, and getting fucked up!


What can you tell us about the current status of DEATH THREAT? You are still playing some shows from time to time but all the band members are involved in other projects.

DT is on hold for the next couple of months or so, were gonna write a new record, and just use some time to get our other projects rolling, and have some fun with it... well be back touring before we know it.


When exactly was CROWNS OF KINGS formed and what would you like to
achieve with the band?
COK was formed in july?2006.. we went to a friends studio, wrote & recorded "lifeline" in a couple hours together, and figured we meshed pretty well, and came up with a name. Our goals as a band are pretty simple. we just wanna play and have a good time. wherever our music takes us is cool.. were willing to work to get it out there, so hopefully we can join the ranks of some of the bands we love, and just do it as often as possible.

Is CROWNS OF KINGS more than a side project?

Yeah, i dont really refer to it as a side project. its a band that im a part of... i work just as hard, if not harder to get COK out there, than i do with DT, so i dont see any reason to call it any less.


You just released your Split EP on Dead Serious Recordings with PRICE OF
PAIN, who also feature members of DEATH THREAT. Why did you chose to
have your first record with them?

Because these guys are practically family, and if im gonna get my pick of anyone i wanna do a split with... it was them. weve been through a hell of a lot together over the past decade as death threat, and i wanted to keep everyone involved for our first release. me and aaron talked about it, and he was into it too... so we approached reaper records, and got it done. DS came at us with some interest of releasing it in europe, so i took one look at his roster, and knew it was a label i would be proud to see the split released on.

How do you evaluate todays Connecticut scene? Who does still play an
important role? Who is coming up?

As far as bands and people that are keeping CT scene alive, i'd have to say Jamey & Hatebreed, Palehorse, IG! (PETE MORCEYS new band featuring ex-members of hatebreed, forced reality, 100 demons, death threat), Bateman, 100 Demons, and some younger bands like Kulture Shock & Hate Your Guts... we have strong bands, and a lot more regulars than weve had in the past.... things are looking up, im proud to say!

PICK UP OUR SPLIT CD!
TELL YOUR LOCAL PROMOTERS YOU WANT TO SEE CROWNS OF KINGS IN YOUR CITY!
thanks for the interview!