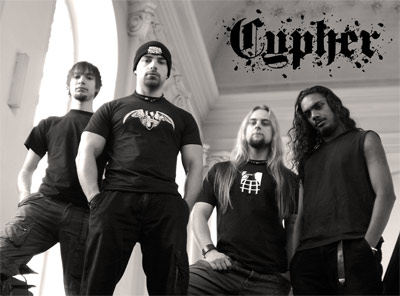 Please, tell our readers your name and your area of responsibility in CYPHER.

We are Sander (guitars) and T (vocals, guitars). We both write all the music for Cypher, T writes all the lyrics.

The name CYPHER can be interpretated as a synonym for number ZERO - what´s the background of this idea?

T: Cypher as the number zero (derived from the arab "sefr") is but one interpretation. A cypher can also stand for an encrypted message, something with a hidden meaning, i.e. not directly interpretable. The name Cypher is also a direct reference to a biblical cypher, one of the most notorious cyphers of the christian era.

This month you´re going to release your hammer - debut "Darkday Carnival" across Europe and USA. What do you expect?

Sander: We are very proud of how the album came out, musically as well as production wise. The reviews (especially the ones from Germany) have been very positive, so we ofcourse hope that the record will do well and that as much people as possible will pick it up.

You are more or less a young band with a steady line-up since 2005 and your new record is just about to become THE underground tip of European ExtremeMetal. How do you feel about that? Does this affect your life in any way?

Sander: Thank you for the compliment:) It feels very good that our album and music is being received so positively. I think it gives us an extra boost to work even harder on writing a record that will blow this one out of the water.

You announce "Darkday Carnival" as "the darkest album ever" and it is, indeed, very gauntly. What was the lyrical and musical concept of this record. Any special reasons why you wrote such an angry and at the same time depressive album?

T: I strongly feel about the subject of each individual song, I think that agression is the only emotion befitting a music genre as extreme as the one in which we roam. Although "Darkday Carnival" is not a concept album, there is a strong anti-christian sentiment in every song. I think that christian dogmatism is one of the greatest crimes the church has bestowed upon mankind. Countless people were sacrificed due to christian cowardness, idiocy and stubbornness. The corruptibility of the churchfathers from the inception of christendom up till now is something which both amazes and disgusts me. Some of the most ridiculous examples of the churches' depravity are "the joust of the whores" and "the cadaver synod", both of which display a remarkable streak of immorality not befitting the descendants of saint peter the apostle. 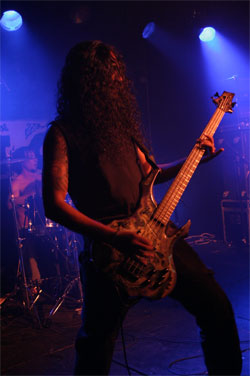 You´ve just signed an endorsement deal with SCHECTER GUITARS. That´s actually a privilege for more popular bands than you are right now. How did this happen?

Sander: We are very proud of that fact. I guess the people responsible for that really liked our music and artwork we sent em. Schecter wasn't available in Holland in the regular stores untill last october. The timing was just right, both Schecter and Cypher were 'new' in the dutch scene so we could help eachother im promoting eachother. We both played Schecter guitars before the endorsement so our choice to contact them was obvious.

Your influences are definitely Death and Thrash. Not comparable with bands out of the "New Wave Of American Heavy Metal" scene. Did that happen on purpose? What do you think about this new "movement" and the "hype" of metal music these days as a cool scene to hang out in?

Sander: As far as composing goes, we don't really think about trends or anything. We just write stuff we think sounds cool. We do have some elements we like to use that define our sound and style a bit. I think bands out of that 'New Wave' scene share some of our influences, being the Swedish Gothenburg bands from the late nineties. They tend to blend in more influences from hardcore where we are more influenced by US death metal. The New Wave has some pretty cool bands, as with every style in metal that is popular, it also spawns a shitload of other bands that have less quality and makes it harder to pick out the cool ones.

T: I am not aware that the metal scene is 'cool to hang out in', metal will probably never be a mainstream genre, but that's one of the things that makes it attractive. In the Netherlands people are generally not into metal, apart from the fantasy gothic metal stuff, but I don't think that is metal at all. Metal is not exactly trendy judging by the reactions of most people here.

Can we expect a tour through Germany this year? If yes, with whom or are you going to come on your own?

Our label wants us to hit the road as soon as possible and we hope we can get a chance on touring supporting a cool band, that would be ideal. Furthermore we are also working on playing single/weekend shows in Germany, we will have some news about that on our website soon. German venues please book our asses!:) 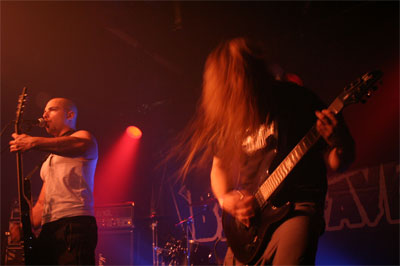 What is your personal "best album of all time"?

Sander: tough one, I'll give you my top4 of albums that I think were landmarks :

- Slayer: Raining Blood
- Morbid Angel: Blessed are the Sick
- At the Gates: Slaughter of the Soul
- Meshuggah: Destroy Erase Improve

T, I can't get decide which is my favorite, but these are my top 6, in no particular order:

Immolation: Close To A World Below
Dissection: Storm of the Light's Bane
Morbid Angel: Blessed Are The Sick
Cannibal Corpse: Gore Obsessed
Deicide: Once Upon The Cross
Danzig: How the Gods Kill

What´s been your personal favourite in 2006 ?