04.01.2008
An experimental metalcore band, HORSE the band is well known for their achievement of an 8-bit video game-influenced sound, resulting in them often being referred to as "Nintendocore". Their keyboardist, Erik Engstrom, uses the Korg MS-2000 and more recently, the Roland Juno-D synthesizer and LSDJ Gameboy cartridge to create their trademark sound. 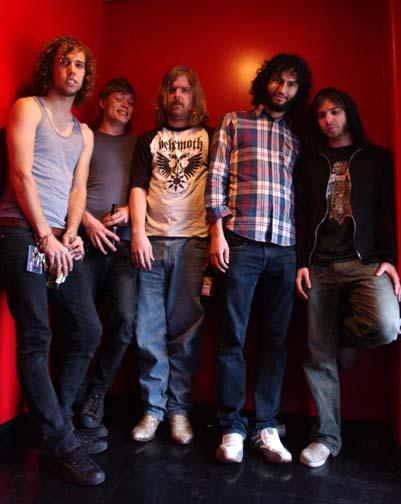 Horse the bands songs include Cut Man from Mega Man, although the song is spelled "Cutsman"; Birdo, one of the bosses from the NES game Super Mario Bros. 2, in the song "Birdo"; and the rabbit-like nemesis from The Legend of Zelda in the song "Pol's Voice". The song "A Million Exploding Suns" refers to the Marvel Comics character Sentry, a schizophrenic hero with this abundance of power.
2007's A Natural Death featured significant lyrical evolution into the concepts of nature and mortality while moving slightly away from the Nintendo metaphors. The song "Murder" is inspired by the Western novel Lonesome Dove, in which a Native American named Blue Duck stalks and kills white settlers on the plains.
HORSE the Band is known for their tremendously energetic live performances; their Halloween show at the First Unitarian Church in Philadelphia was filled with props and costumes.
Current band members include: Nathan Winneke (vocals), Chris Prophet (drums), David Isen (guitar), Dashiell Arkenstone (bass), and Erik Engstrom (Synthesizer/LSDJ)
I met up with Horse The Band in their van before their show, to listen to what they had to say about their tour and the new album.


So tell me about how you started the band and how you got together and such.

Erik Engstrom: We were in high school; we had no friends. It was me and Dave, our guitarist, and *laughs* I dont know, we just started playing music. We didnt go to any shows, we didnt know anything about the scene--we didnt even know it existed. We just wanted to have a band, and we just started writing the most horrible music you could ever think of, and now eight years later, here we are *laughs.* Thats about it. I mean we got a lot of new members along the way who knew how to play their instruments, and we learned how to play our instruments. So, that was good.

So you started with a keyboardist and a singer?

Erik Engstrom: No, we started with a keyboardist, a guitarist, two singers, a French horn, a bass player, another keyboardist, and a drummer. 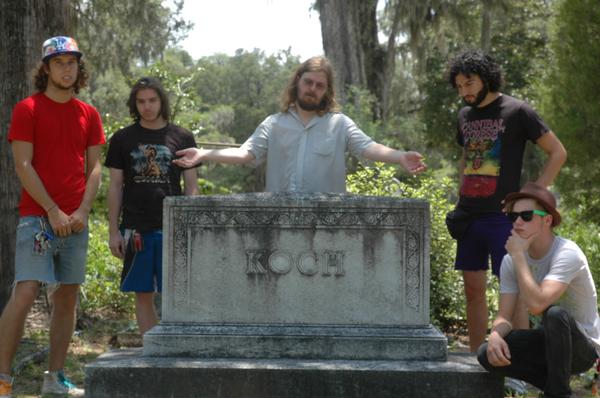 And now its just come down to

And does it sound a lot tighter. Whats the difference in the music?

Erik Engstrom: Yeah, you cant even compare the two. The sound is tighterthe songs are better, I dont know *laughs.* If you took where we are now and where we started, you could have eight different bands in between that sound completely different.

What kind of genre were you before and how has it changed to now?

Erik Engstrom: There was no genre before *laughs.* Cause we didnt know any bands, so we didnt even know what a band sounded like. We sounded like fifth graders trying to write music. When our singer, Nathan, joined the band and we showed him our music, he said it was like kindergarteners trying to play music in class*laughs*Kindermetal.

What has inspired you most recently for this new album?

Erik Engstrom: Together as a group I would say nature, time, animals, and emptiness.

And whats your new album called?

And how does it tie into everything you just said?

Erik Engstrom: Well, natural ties into nature, and so do animals. The album title, a Natural Death, it shows us being murdered on the cover by Indians, which is not a natural death. Its not dying in your sleep, but we say it is, because thats deep. Everything here is a part of nature, like these cars and these buildings were just made by humans/animals. So no matter how you die, it is natural--It is part of nature, and life is empty.

So your philosophy is Buddhist?

Erik Engstrom: No, not really.

Erik Engstrom: Nathan, our singer has some Tao ties. The band has some Taoist influence, but also goes its own way away from that. But our philosophy on this album is: your life may not matter at all when you think about it on a grand scale. But, thats not something that you should be depressed about, because, if you are, thats just ego and sentimentality about nothing. So just enjoy your life, do what you want, and if it doesnt matter, fuck it.

So its existentialist, in a sense.

Erik Engstrom: Yeah, its probably closer to existentialism, but with a really-really happy spin on things. Cause theres no reason for that to be depressing at all. Im way into the existential writers, but I think that were nowhere near as sad as most of those dudes.

Erik Engstrom: yeah, Camusthe new guy, Wellabeck, all that stuff--its cool. But I think that we dont have as sad of a view on life. If you boil down what were saying then, yeah, maybe were saying the same things. But then our take on it is, who cares! Dont get down about this stuff! Youre living, make the best of it, and follow your heart. Maybe you cant make a difference, but theres no point in not trying to, if thats what you want to do.

Erik Engstrom: Yeah, cause everyone who looks at our album thinks were depressed and have this somber view of things, but I dont think we do. But were also not a joke band *laughs.*

So has it always been that way from the beginning, or is it a metamorphosis as youve matured as a band?

Erik Engstrom: The album is still more about the music than the philosophy. These thoughts all came to us at once as a group just from being on tour. We talked about them, and joked through them, and came to some conclusions. Being on tour makes you see the world from a new perspective. You get to take a step back from your local involvement, and all your friends and family, and having a base. You step away and see many people with their bases from far off, and you realize that no one is anything to anyone else except the ten basic people around them. And no ones life is as minutely important as they believe--even the super important ones. A lifetime, lets say, is between 50 to 100 years, and then its done. Maybe people remember them once every six months, or in history books, or something, but even that will be annihilated *laughs.*

As a band, weve been friends forever, and we just talk about whatever. Were not just business people trying to do a band together. For as long as I remember, the core of the band would be getting together and talking about whatever. So I wouldnt say we are philosophers, but everyones into their own thing, and reads a lot, and brings in their own perspective. We have a humorous view point on some stuff, but thats just a result of

Erik Engstrom: Yeah, humor is very important--to not take yourself too seriously-- cause if you do, you just have your head up your ass, and you dont know where you stand in reality.

So, I just want to tie this all together. When you started out you said that you were always very light-hearted and humorous and youve taken that throughout your music and into this album now, but with more philosophical sense now than youve had before.

Erik Engstrom: Yeah, theres always been the humorous element, but weve always been serious about the music too, with the exception of one or two songs on each album which we thought were funny, but still good. We didnt try to write any horrible music as a joke.

Erik Engstrom: Well, at first all we could write was horrible music, but we were still tryingin our defense, we didnt know that it was horrible at the time *laughs*or maybe our music still is, who knows. But weve always been trying, and we just got better along the wayhopefully.

Do you have anything else to add?