J: How is it to sort of be headlining the Taste of Chaos tour?

H: Ah, you know, we are just a noisy supporting act for The Used I guess.(Laughs) They are the headliner. They play last, not us. They are good guys, and I hope that at least a few people are here to watch us, and do not take their smoke-break while were playing.

J: Well, as far as I know quite a lot of people are only here to see you play.

J: Do you see a lot of differences between European and American crowds?

H: I think people in Europe care more about music. Americans are pretty jaded because most well-known bands come out of the States. I mean, theres definitely large bands in every country and that sort of thing, but for some reasons Americans either have it too good or think they have it too good. They go to see a band play, it is usually just like hanging out with their friends, and not pay attention to the bands. Here it is completely different. Everyone is like: they like what they like, and if you dont like it they wanna fight you.(Laughs) What? You dont like Hatebreed? I will kill you!!! Just giving them as an example. And you are like: Whoa! They take music out here way more seriously!

J: What is more fun? Playing over here or in the States? Homecrowds are surely an exception, arent they?

H: It is. Especially a hometown crowd is always a plus. But the three top shows that I have done in this band, one was hometown and the other two were overseas. There is just this air that in Europe people seem to appreciate the fact that you have travelled a long way, and you are here and trying to enjoy yourself. That is really cool.

J: Is it still strange for you to play in front of a lot of people that sing along, and go crazy to your music?

J: Did he have his surgery?

H: He certainly did  on the 27th. That is why he had to miss the tour. There was no way he could have done it. Hes doing a lot better, and he is supposed to be confined to bed, but of courseits Adam!(laughs) Hes roaming around and all that good stuff, and also there was no surgery on his mouth so he has been calling us non-stop. He leaves us weird messages.(Laughs) Hes doing a lot better, and he says to tell the Germans: Hallo! He spent some time over here because he dated a girl that lives in Germany, so he has been over here quite a few times.

J: Is it strange to be on tour without him?

H: Weird. I mean we still have fun on stage without him, but there is certainly a badly dressed void

H: (Laughs)Yeah! And the cape, the occasional hat like the viking helmet or the helmet with the beer-holders. He wore a viking helmet on national TV in the States. We did a late night talkshow, and we said: Youre not gonna wear that?! and he said: Oh yeah!

J: Being on the road who do you think would get killed first for annoying people  inspite of Adam!

H: (laughs) The thing is no one really gets on anyones nerves because we try to give each other a space.

J: Well, looking around your bus there is not too much space

H: Well, but its like that back room there is usually the Movie Room. Youll pretty much find me there  all the time. We got this bus in the UK, and weve had it just under two weeks, and I watched about 30 movies! Thats just what I do. If anybody would get killed it would be me because I dont hang out more than I should and its like: Dude, where are you? In the back! I am always in the back! And then they ask me to hang out and I do, then were downstairs, and the crew and all the guys are there, and it gets so crowded that I go: Mhm, its so crowded here. I think I am gonna go watch a movie!(Laughs)

J: How about the DVD. Is it strange for you to have your lives taped, and seeing yourself on screen?

H: Its kinda interesting. It is really a cool retrospective just seeing how everything came about, and even though I have not been a part of it. I understand it, it is just like seeing it all and hearing it from other people too, I mean you notice that I say almost nothing.(Laughs) Its like: I dont wanna talk!(Laughs) Thats just not me, but its definitely strange because I didnt know that people pay that much attention to us! 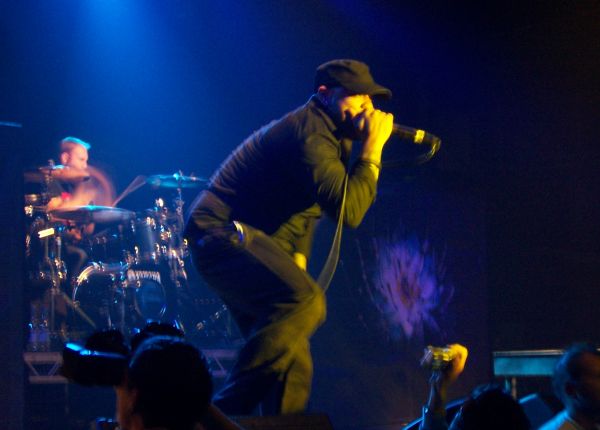 J: Well, theres surely gonna be some kids who are going to watch it over and over again!

H: I guess, yeah, I mean I have seen a good portion of the DVD  I have a hard time looking at myself in the mirror let alone on a TV screen!(Laughs) But it seems to be pretty entertaining like the show part seems to be really good, but I can only see so much of it and then I go like: Ah, I dont wanna see myself no more.(Laughs) Yeah, even just the stories and the silly stuff in it, its that what we really tried to do  to make it something that hopefully people could get a few laughs out of

J: I bet they will! Just take Adam and the Wasabi-ball bet!!!

H: You know, the thing is he has done that twice!!! We dont have the second one on there. That one he did for like 215$, the first one was just as big and he did it for 8$!!!(Laughs) At least he built up!!!Theres a lot of other funny stuff that didnt really make it. Stuff like what happened on this tour. Actually, that might just end up on somebody elses DVD. We went to this Wildlife Sanctuary in Australia and there was this electric fence and some water, and I sort of jumped over it into the Tazmanian Devil enclosure. And then he came for me, and I was outa there!(Laughs) Hey, I mean, I won 200$!

J: So there is a lot of doing stupid things for money?

H: Yeah, well, who can resist the call of a dollar!(Laughs) Theres just so many stuff that didnt make it on the DVD because we were so pressed for time, but maybe well do another one down the road.

H: (laughs) Exactly! There is always funny stuff happening and I often even just forget what we did

J: How was it for you to take Jesses place?

H: It was like doing karaoke in front of a really big crowd!(Laughs) It was pretty cool. Nah, I mean it was good. It was kind of a plus that I didnt do the album, so I can still listen to it and enjoy it for what it is. And I mean Jesse and I have been friends for a long time, and I know him longer than any of the other guys. We talked right when I joined the band and he was like: Dude, I cant see anyone else do this but you! And I appreciate that because our bands have played together as you saw on the DVD, and it was cool. It was also very strange, and I didnt expect it to turn into this! I mean I joined the band and I was like: Ah, well go touring in the summer whatever, and go back to my job NOPE!(Laughs) That didnt happen. When we were done touring  we toured again. When we got done with that tour  we came over here, and we were over here for two months, and thats when I had to call my boss and say: Yeah, you know its looking like I am not coming back.(Laughs) Not because I thought we were going to be super big, but only because you can miss only so much work. I took a leave and at first I was like: Alright, thats ok. No problem, but then it was like: This is getting too long. Theyre gonna have to fill the position.

J: How does songwriting work on KSE?

H: Everyone kinda comes up with their own stuff. Theyll have chords or riffs or whatever, and then we just meet and listen, start throwing stuff in together its like: Oh, I got a part that fits thator Hey, lets play it a few times and see what comes up. Sometimes Ill have lyrics already written, sometimes I wont write anything until the moment I walk in the studio.(Laughs) That happened a couple of times!(Laughs) There are some songs in this set that were some last-minute-ones. Not particularly last minute but like I dont have anything for thatlet me thinkok, and then I wrote some stuff, and that was it. I dont know; its just a process. Sometimes it works that way, sometimes it doesnt.

J: So it is basically like everyone doing the songwriting

H. Its just a really cool process how it all comes together, and watching these guys write stuff while I sit there and be like: Yeah, thats pretty good. I think I am gonna go get some orange juice now!!!(Laughs) What am I supposed to be doing?! I dont write any music!(Laughs)

J: So, you still practice in Joels basement?

H: Yeah, basementI think we might move back into Joels room or maybe his brothers room. I dont know.

J: for the sake of closeness

H: Yeah, and its got acoustics, you know, so we will see. I am sure well stay at Joels moms for a while. I mean eventually we may go ahead and get someplace else, but that sucks because then I cant just like reach into the refrigerator and grab food

H: Yeah, we walk in and be like: Hey mom!, open the fridge and be like: Dude, I am making a sandwich first! So thatll be missed.

J: What about future plans? Touring? A new record?

H: Future plans: finish these last few shows, and then go home and sleep for 5 months!(Laughs) Nothing has been written, were just gonna take a break.

J: I mean the last album was written on tour, wasnt it?

H: Some of it. It is really hard to write on the road. But that just hasnt happened on this tour or on any of the tours. I think we first started touring in April last year, and we just havent stopped. So were just gonna take a break, and I know Adam is gonna record a couple of bands, I manage a bunch of bands, and I know Mike is gonna do much of artwork, and I think Joel might be teaching a little guitar, and Justin will probably end up playing with a symphony again or something like that just because its what we love to do. Everyone just stays involved in music in one way, shape or another.

J: Yeah, once youre into it you cant get out

H: There is no escape! Were just gonna take a breather, and see what happens down the road. No plans for the first time ever  home for the holidays! Thats gonna be nice